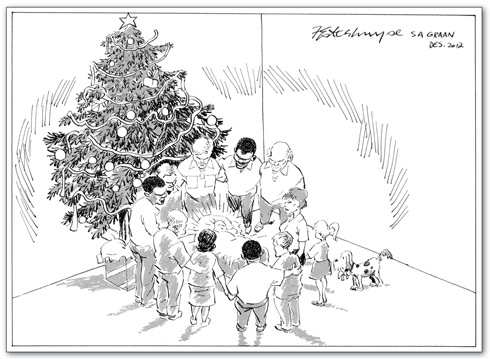 It is the end of the year: Harvesting time for winter grains, planting time for summer crops, holiday time for school children and relaxation time for many office workers. It is time to braai, play cricket, swim and be outdoors.

It is also the month during which we celebrate Christmas! What would Father God’s Christmas message for 2012 be to grain producers?

In the NG Congregation of Malelane’s quarterly publication, where I visited recently, I read the following:

Herein lays a mouthful of issues to ponder during the big days while lying under the shade of the trees and umbrellas. The thought that came to my mind, was the one of the Christmas tree.

Each one of us has enough time somehow this time of the year to again get down from our own Christmas tree like Zacchaeus from olden days to spend time with our Saviour.

High up in our family’s Christmas tree is the star – the one that points to Christ, but He, He is to be found down low under the tree, in the manger.

Maybe this year, you were the star in your team, house, school, business or wherever. Many people extolled your virtues with flattering words and placed you right up there in the top branches of the tree of your life. Possibly your achievements were merely middle-rate and you are standing somewhere in the middle on strong and firm branches.

December wants to invite you to forget about yourself and your achievements and to come down to the manger. Come kneel there before Him and find out whom you should be listening to this December, whom you should open yourself to, how you should look at others and which mountain you should climb in 2013.

The danger does not lie in the risk of new things, but rather in the whole of December passing without you becoming quiet infront of the manger to hear Him. There are many diversions and distractions between the Saviour in the manger and the star at the top.

All the things, like the shiny balls, gold decorations, gifts and pine cones might prevent you from descending to Him below the tree, and come January, you again merely ascend the tree to the top. Perhaps you once again reach the top, but it might just be without Him who wishes to go with you to your home to have a meal with you and your dear ones.

Have a blessed Christmas.