You need to be passionate about farming 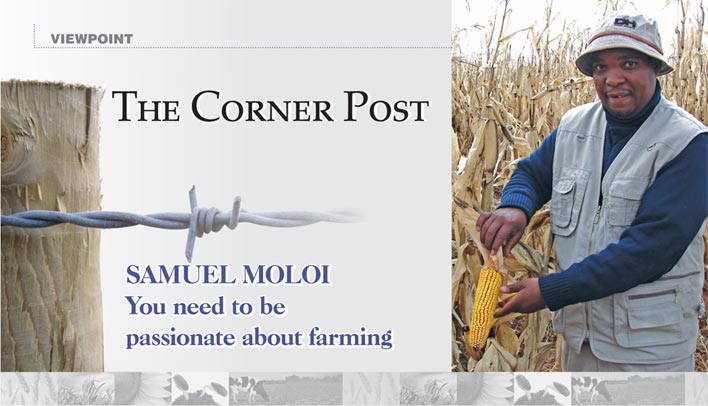 When Samuel Moloi received the award as the 2009 Grain SA Developing Farmer of the Year he realised that his childhood dream of becoming a farmer was now a reality. As his father was a farm worker, he was raised on a farm and farm life excited him as a young boy. “When I was young I saw everything on the farm – from the cattle to how a tractor works and I just loved it!” he explains excitedly about where his passion for farming arose.

Samuel currently farms in the Fouriesburg district where he leases 700 hectares of land. He focuses on crop farming as it is very important to him to play a role in ensuring food security. He plants maize, soybeans, wheat, dry beans and sunflower. To him the award he received was a tremendous honour and he sees it as ‘an injection’ to improve his farming skills. When he started farming he harvested only 2 t/ha on maize and 1 t/ha on wheat. Through the skills and knowledge gained by the training Grain SA offered he has become a more substantial farmer. ‘I am now harvesting 6 t/ha – 2t/ha to 9 t/ha on maize and have harvested 4,5 t/ha on wheat.’ At the time of the interview he had cautiously only planted 130 ha of maize and 105 hectare soybeans due to the dry conditions. He is however someone with a strong faith and believes the rain will come.

This farmer, who is motivated by his love of the land and farming, mentions that increasing his knowledge was the main contributor to his success. He mentions that the knowledge he has gained about relevant topics like fertiliser, tillage methods and crop rotation came by attending study group meetings, training courses and farmers days presented by Grain SA. He adds that the Grain SA mentorship programme is crucial to the success of developing farmers. He has attended courses about crops, implement maintenance and many more, but would like more training on the financial aspects of farming. ‘This is the crucial side of farming. A farmer must know his budget for the different seasons,’ he explains.

Challenges he sees as problematic are climate change and the marketing side of farming. He is motivated by his love of farming and the land and to him the best part of farming is producing food and providing job opportunities for others. ‘Knowing that what I grow can help feed people encourages me to keep on farming. It is a wonderful feeling to know that I am producing food for the people of my country.’

In the Moloi household agriculture is always a topic under discussion. Wife Emily supports her husband in every possible way and their 12 year old son is already involved on the farm. ‘If we are planting, he is on the planter. He will definitely follow in my footsteps,’ he says proudly. Samuel dreams of owning his own farm and becoming a fully commercial independent farmer, producing lots of food for the country. He is hesitant to speak about the future of agriculture in South Africa, but eventually says, ‘If government ignores skin colour and gets involved in assisting famers, then yes, agriculture has a future in South Africa. Agriculture should not be about colour. The only goal should be food security.’

Samuel sums up his advice to emerging farmers in four words: Passion, knowledge, communication and prayer.