You can't get chocolate cake from cheese cake ingredients!

For any seed sizes where the embryo develops into a seedling, the process of germination is essential. It involves the reactivation of the metabolic pathways. This leads to growth and the emergence of the seed root and hypocotyl. Viable seed will be able to establish a healthy normal plant above the soil.

Three fundamental conditions are essential for germination to occur:

Seed companies and farmers can rest assured as the International Seed Testing Association (ISTA) rules for the international testing for seed germination, include the differential for seed viability.

It is essential to distinguish between viability of genotipically small mature seed and phenotypically small, shrivelled, immature seed from the same genotype.

The genotype of a cultivar can be described as a recipe for seed sizes, imprinted in the DNA. The DNA gives the genes their “instructions” to produce the components to determine the genotipically correct seed sizes.

Just as the ingredients mixed to produce a chocolate cake will not produce a cheese cake! Seed size is governed by five pairs of genes. Genes governing the large size in seed are dominant. So, even if only 4/5’s are planted, the offspring will vary in seed sizes depending on the genotypic traits of the cultivar, the environmental factors of the season and locality and the cultivational skills of the farmer. 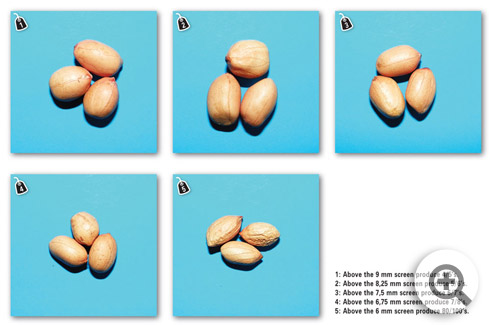 If for example the cultivar Akwa is planted in an area that is suitable for groundnut production – wherever the locality, whatever the climatical conditions – the genetic information contained in the DNA will produce approximately the results shown in Table 1. 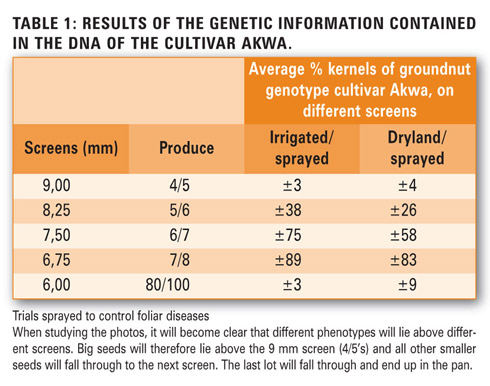 Seed size has a significant influence on the future performance of the seedling. Even if planted under uniform conditions, seed sizes vary according to the cultivars’ genotype and will reflect in the seedlings. There are no lasting advantages in the long run for seedlings from one genotype produced from their bigger seeds than from their smaller seeds.

The bigger seed does have more immediate available essential nutrients for the seedling developing from it, to use at the start than that available in a smaller seed, but when roots have formed and the seedling appears above the soil, the growth of the seedlings will level out according to the genotype and the climatic factors. Therefore, seeds of identical size and weight will give rise to seedlings differing widely in size, but all the adult plants will produce pods and seeds according to the genetic recipe present in the cultivars’ genotypic DNA.

The growth rate of a seedling from a small seed is higher than that of plants from bigger seed sizes, but all plants from the same genotype will in the end attain the same final phenotype. For example, if a producer plants Tufa, the plants will eventually show the same phenotypical traits such as growth habit, uniform height and pod and kernel morphology across the trials.

Seed size correlates positively with seedling size, but then not with the inherent vigour of the plant – so that grading the seed would not make a more, vigorous stock.

Bigger seed sizes present bigger external surfaces for soil to put pressure on, so the shoots must push harder against the soil to emerge. The bigger size seed shoots will take longer to emerge than the smaller seed shoots. Quality small seeds from the same genotype will germinate just as readily as big seeds and produce normal plants.

This information from previous years’ yield reports and also from the ARC-Grain Crops Institute’s yearly National Cultivar Trials report, will help the farmer to determine the plant population needed for a good yield.

Producers must also realize that they must plant at least 20% more seed per hectare to get the desired plant population, as they have to allow for normal seedling and seed losses caused by environmental factors. This includes temperature changes in the soil because of rain, soil pathogens and seed that got damaged in the planting process.