World Soybean Research Conference to be held early next year 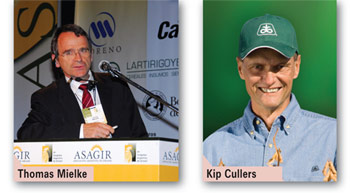 South Africa is proudly hosting the World Soybean Research Conference (WSRC) next year from 17 to 22 February. This event provides a global forum for the world’s soybean researchers to exchange information and research findings across all segments of the soybean industry.

Attendees from around the globe are set to converge at the Durban International Convention Centre for the conference. Participants will hear from producers, researchers and industry leaders as they explore the entire soy value chain from growing and processing soybeans, to transporting, using and marketing soybean products.

This year’s theme: “From China to Africa – Can research close the gap between soy production and increasing global demand?” will highlight diverse topics in both plenary and concurrent break-out sessions, including: food security; sustainability; health and nutrition; genetics and breeding; processing; applications; agronomy; transportation and storage as well as an overview of commodity markets.

Under the direction of the organising committee, participants will hear from producers, researchers and industry leaders as they explore the entire soy value chain from growing and processing soybeans to transporting, using and marketing soybean products. The WSRC promises exceptional opportunities for attendees to network with and learn from leading soybean producers, processors and companies representing the food, feed and ingredients sectors.

It is also with great pleasure that the WSRC can announce the two confirmed keynote speakers for 2013: Mr Thomas Mielke and Mr Kip Cullers. Mielke, executive director of Oil World, will be one of the headline speakers on the opening day of the conference, 18 February. He specialised in global commodity analyses and market research on the supply, demand and prices of oilseeds, oils, fats and oil cake. He devotes most of his analyses to soybeans, sunflower seed and rapeseed.

Cullers is joining the conference on the agronomy day on Thursday, 21 February. He is a very successful producer and farms in Purdy, Missouri, USA. In 2006, he set the world record for soybean yields when he harvested 9,4 tons/ha in his contest fields. The next year he broke his own yield record by harvesting 10,3 tons/ha. And although he didn’t beat his personal best in 2008 because of uncooperative spring weather, he still harvested an impressive 8,1 tons/ha and averaged 6,7 tons/ha in his overall farm production.

Beginning with the planting season of 2010, he decided – in his own words – to “start from scratch” with his growing practices for soybeans. After completely changing all that he usually did to grow soybeans, he set another world record of 10,7 tons/ha in August 2010.

For more information on registration, exhibition or sponsorship for the 2013 WSRC, please contact Ms Cheryl Marsh (project manager) on (021) 555-4152 or wsrc@paragon-conventions.co.za or visit the website for more details at www.wsrc2013.co.za.