Will Southern Africa cope with the current drought? 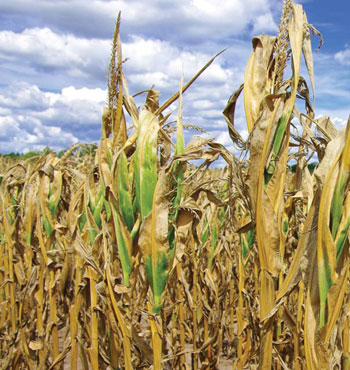 The beginning of 2016 saw heightened concerns about the erratic rainfall distribution, with all previous maize projections being revised downwards to ‘severe’ and ‘disaster’ scenarios.

Many fear that Southern Africa may be on the brink of the worst drought recorded in history, surpassing the levels reached in 1992. There are several differences between the 1992 situation and the present though.

Firstly, the regional dynamics are quite different in that there are more surplus producers in the region, namely South Africa, Zambia, Tanzania and Malawi. Secondly, the region is far more exposed to the impacts of global food markets, with efforts to integrate regional food markets, making the region somewhat more able to move grain from one place to the other than before.

Given these structural changes in national, regional and global food markets, the region faces what could be an entirely new challenge to what is fundamentally an old problem.

Chief among these challenges is determining the level of production and import requirements – there is a need to start thinking of possible strategies that would ensure that food is available to the entire regional population at an affordable price.

This involves answering the following questions:

Where are the grain imports going to come from?

The resultant effects of the expected steep declines in maize production are significant maize imports. The expectation is that South Africa (including Botswana, Lesotho, Namibia and Swaziland [BLNS]) may import at least 5 million tons of maize (1,7 million tons white, and 3,3 million tons yellow).

Meanwhile, recent reports have highlighted that Zambia might be compelled to import, even though an estimate is not yet available. Zambia’s maize balance sheet seems to suggest, however, that they can rely on their carryover stocks and a 500 000 tons strategic grain reserve that could minimise the level of imports.

This means that Zambia’s capacity to export into the region is curtailed. The aggregate picture of the regional total maize imports could be at least 7 million tons, most if not all, of which are from deep sea imports.

The question then is, from which countries will Southern Africa import the much-needed (white) maize?

Of the expected 7 million tons of imported maize required for the region, at least half of it should ideally be white maize meant for human consumption (authors’ calculations).

Outside of the African continent, white maize is mainly produced in Mexico, with current surplus stocks of at least 1,5 million tons of non-GMO white maize available for export markets.

Is the infrastructure going to be able to handle expected import requirements?

If the region becomes entirely dependent on deep sea imports, it brings the important question of whether the port capacity will manage to handle an unprecedented level of grain imports.

The question of whether infrastructural capacity is sufficient to meet at least 6,2 million tons of maize imports and an additional 5 million tons of other grains (e.g. rice, soybean and soybean oilcake and wheat) is a question that is yet to be answered satisfactorily.

In the recent past, South Africa mainly used the Durban, Cape Town, Port Elizabeth and East London ports – all of which have a combined capacity of roughly 4,8 million tons (refer to Table 1).

However, while it is unclear what the maximum grain import capacity is, industry experts suggest that ports have an additional capacity to handle imports of roughly 7 million tons. Moreover, there are arguments that suggest the creation of additional capacity in ports that are traditionally non-grain importing ports, such as Richards Bay. Emerging concerns relate to the potential traffic congestion at the ports and on roads – which will affect the turn-around time of grain trucks. This point is particularly important if we consider that 80% of all grain transported inland is done by road.

The potential problem of traffic congestion could be averted, or at the very least lessened by the possibility of increasing the use of rail transport as an alternative. Provisional estimates from Transnet show that out of the 308 wagons in their fleet, there are 108 wagons that are grain containers – which have a capacity to transport 7 920 tons per day (Transnet, 2016; authors’ deductions).

All of the estimates regarding the import requirements and port capacity are based on expect speculations and in certain cases opinions, which might not necessarily reflect the outcome. It is also important to note that the summer crops are still in early growing stages, hence there is no certainty about the final crop production volumes. All these factors will affect the import volumes and prices, but the emerging outcome will be much clearer within the next two to three months, once crop assessments have been completed across the SADC region.