The drought had an enormous impact on our supply and demand within the South African maize industry. The decrease in supply due to low production lead to an import scenario of close to 3 million tons needed in order to satisfy the demand.

The world is a yellow maize producer and world supplies were sufficient. The challenge was with white maize.

The second uncertainty was the availability of non-GMO white maize. As the crop improved and with the above expected yield of the late plantings, this became less of a problem and currently the expectation is that South Africa will import enough.

However, the free market and prices must still facilitate this process until sufficient early deliveries are received in the new season.

Later in the year the approvals for GMO white maize imports were also granted.

The third uncertainty was the quality of the imported white maize. This is the topic that we are going to spend some time on.

Quality of imported maize
The South African Grain Laboratory (SAGL) constantly monitors the quality of South African maize and imported maize. The SAGL, funded by the industry, is an independent body that uses international accredited sampling and analysis methodologies.

This was also the case in terms of grading and it is clear from the grading variables that the imported white maize grades were similar to that of the local white maize. It is clear though, that there is a difference when comparing the Mexican maize to the South African maize and the USA maize in terms of defective kernels. 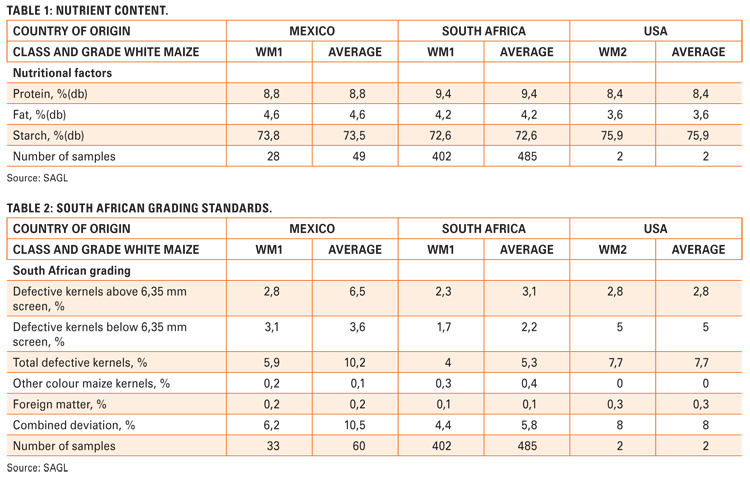 This can easily result in losses when looking at the milling process, especially on the quantity lost before milling.

When the physical characteristics are compared, the Mexican maize have a higher kernel mass, but the most important factors are the stress cracks and the milling index. The milling index is still an index and not an exact figure, though. It is important to view the index according to a scale as set out below.

According to the scale referred to above and the findings of SAGL, the milling quality of all three regions is within the good milling quality scale. None of the regions’ maize can be categorised as bad milling quality in terms of the milling index. However, it is clear that the imported maize has higher stress crack percentages and this can result in losses when milling.

In terms of whiteness the imported maize is actually performing very well and has an even higher index than the local maize. Keep in mind that this index is determined after milling and not on the whole grain.

In summary, the imported maize can compare with South African maize based on the milling and nutrient samples. Various losses occur due to breakages of kernels, stress cracks and defective kernels. This means that there can be losses due to handling and transportation before it enters the mill, which leads to the fact that local maize can trade at a premium – due to limited physical losses, meaning better profits.

How can producers make sure that these premiums can be obtained?
Since there is a high demand for local white maize, it means that the producer can obtain a better basis in terms of physically selling the commodity – keep in mind though that this is for the physical commodity.

To obtain these premiums you must have the physical maize and you must negotiate with buyers. This means that the producers need to talk to a few buyers in order to obtain the best basis.

Keep in mind though that a proper calculation must also be done in terms of carrying costs. This means one must calculate the costs of storage and interest rates until the sale takes place. The additional premium on the basis must exceed these costs to make such a deal profitable.

In a marketing year with shortages clever marketing must be used in order to obtain the best basis for your commodity. This is mainly possible due to the high demand for local maize, whereas in normal marketing years these opportunities do not exist. 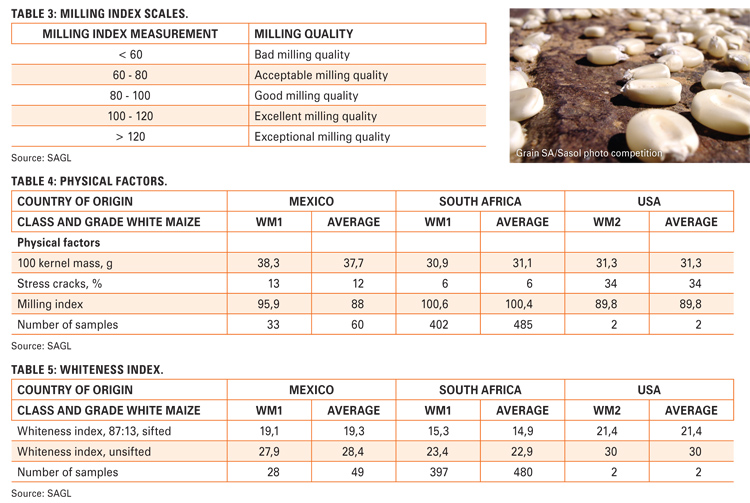