When Grain SA and the Jobs Fund join hands ...and the story of two farmers

It is common knowledge that Grain SA has long been committed to farmer development and assisting previously disadvantaged farmers in the commercialisation process. Another important part of the development programme has been the study group programmes.

There are also more than 5 700 subsistence farmers who attend these meetings. These farmers farm from 1 ha to 10 ha. We have seen how the knowledge transferred has impacted them positively and made a direct contribution to their household security. When you farm 1 ha and manage to increase your yield from 1 t/ha to 6 t/ha, it makes a significant difference.

However, we have also seen that the message needs to be spread much further and that the farmers need timely assistance in accessing correct production inputs. We also know that mentorship of the farmers during the critical summer months makes a big difference to the end results.

To this end a project was begun in 2014 with the support of the ARC (mentorship), Monsanto (Round-up Ready hybrid maize seed with Round-up for 1 ha) and Omnia (correct fertiliser at 25% discount).

Since we believe that the success of any development programme is directly linked to the involvement and a sense of ownership by the beneficiaries, we asked each farmer to contribute R1 500/ha. By October that year the project was launched with 855 farmers.

Life after the project

Past experience has shown that farmers must be assisted for a limited period of time and their contribution should increase each year until they can fund the planting themselves.

If this is not the case, then farmers participate while they receive grants and when the grants stop, the whole effort stops. We do not want this to happen.

Initially the farmers will only contribute 25% of the production costs and industry will contribute 30% (in the form of discount) – the balance for the inputs will be carried by the Jobs Fund. However, the support will only continue (on a de- creasing basis) for four years.

In year five the farmer will carry all the costs. In this way, we are hoping to have sustainable production on all the hectares after the end of the project. The farmers will know what to do and they will have grown accustomed to bearing the costs of the inputs.

Mr Inhlanhla Mngadi and his brother Thula are true farmers. Their love for working with the soil is undeniable.

The Mngadi brothers became involved with Grain SA and the Jobs Fund project in 2015. They have access to land on the banks of the Bushman's river in the Kwa-Dlamini area, 30 km from Estcourt. They have great passion for agriculture and are eagerly learning wherever and whenever the opportunity presents itself. They attend every training workshop and study group meeting that take place and put what they learn into action.

The brothers planted 2 ha white maize through the project and harvested an outstanding 11 t/ha. Previously they had planted all 9 ha which they have access to and harvested the equivalent to what they achieved on 2 ha in this drought season!

The Mngadi's sold their maize to Afgri and have invested their profits straight back into the Grain SA Jobs Fund project for the new season. They intend planting 8 ha next season. The brothers saw the fruits of their hard work and are ploughing everything back to grow their business.

They employed no-till practices this year and practiced good chemical control of weeds, which resulted in their successful yield. They also worked diligently to keep communal livestock out of their lands.

The crop was harvested by hand and threshed by a threshing machine sponsored by Grain SA. This provided part time employment for eight of their community members. I cannot wait to see the strides these two will take into the future – potential commercial farmers indeed! 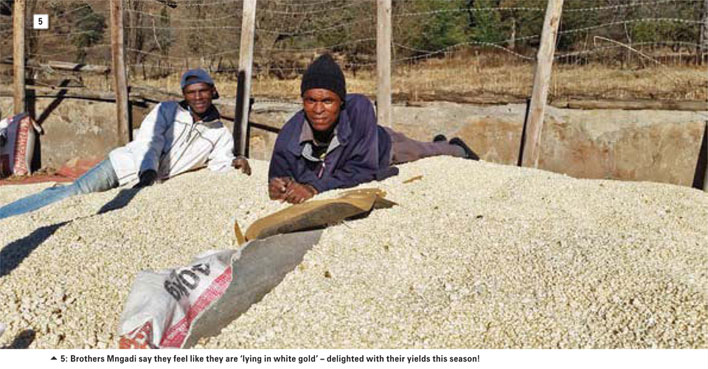 Mr Mzwayi and Mrs Celiwe Zuma from the Hlatikulu region have access to 6 ha of arable land in the foothills of the Giant’s Castle mountain range. They are an exciting couple to be involved with on their journey in agriculture.

Both are extremely dedicated to their family and their work. This 6 ha are what they rely on to support their family. The Zuma’s both entered into the Jobs Fund project facilitated by Grain SA in 2015. Previously they had relied on traditional practices, i.e. land preparation was done by ploughing, then disking and then planting conventionally using contractors.

They would plant the cheapest seed available, fertilising only with kraal manure and use little to no chemicals for weed control. Through the training they received in the Grain SA Jobs Fund project, the Zuma’s have adopted modern methods by implementing no-till practices.

They sampled their soils and fertilised accordingly, including the application of lime. They made use of Roundup Ready maize seed and applied the appropriate chemicals. Planting was done with a tractor, but the rest of the work was done by hand including spraying, fertiliser application and harvesting.

Watching the Zuma’s take their formal ‘classroom’ training and putting it into action in the field has been inspiring. They have seen immediate benefits from these new practices and have been so excited by the possibilities it holds for them as a family.

In the past the Zuma’s were satisfied with a 1,5 t/ha to 2 t/ha crop. In the 2015/2016 season they achieved a 4,1 t/ha crop! Considering this year saw one of the worst droughts ever, this was truly an exceptional achievement.

Besides the direct benefit of food security for the Zuma’s as a family, they have also provided part time work for 15 people through the season. This has truly been food security and job creation in action.

All 855 farmers involved in the project planted their maize crops and saw overwhelming results. Their successes attracted much interest and increasingly more farmers began asking to be part of the project.

Imagine our excitement when we heard that the Jobs Fund had turned the spotlight to the agricultural sector. Since their explicit mandate is job creation, income generation and poverty alleviation, we felt we could submit a proposal to expand on the project we had already set in motion.

Included in the proposal were a few important elements such as:

The Jobs Fund projects all work on the basis of 1:1 funding so they will only match the funding that is put up by the other partners. In this instance the cash deposited by the farmers together with the funding from our other partners, including the discounts offered by the input suppliers, counted as our 'own contribution' and were then matched by the Jobs Fund. The Jobs Fund contributes the full cost of the mentoring and also assists with the shortfall in the cost of production inputs.

The 2015/2016 season was one of the driest in living memory. This presented challenges and regrettably the farmers could only plant 1 248 ha instead of the planned 1 803 ha.

Nonetheless we have been encouraged to see the amazing results achieved where farmers were able to plant.

We are really excited to see that farmers are suddenly seeing hope for their farming enterprises. The true investment made by a project such as this is in the individual. While farmers are expected to make an own financial contribution, they are supported with knowledge and financial assistance.

The percentage of their own contribution will increase each year with the end-goal being that by the fifth year the farmer will be in a position to plant without any further financial support and will consequently be an independent farmer.

The potential to change the demographics of agriculture in South Africa through this network of partnerships is huge and exciting.