Wheat: Breeding the future
Part 2: Perhaps it is in the seed?

During the July 2018 issue we introduced the prebreeding project being conducted at Stellenbosch University’s Plant Breeding Laboratory (SU-PBL) as part of the Department of Science and Technology (DST)-Grain SA National Wheat Breeding Platform.

This article will focus on one of the more easily relatable traits that the project is focusing on, namely grain size and weight – traits that are traditionally considered as part of the quality trait family. In recent years plant breeders have, however, been able to prove that given the correct genetic building blocks larger seeds can also lead to a higher total grain yield per square metre. Previously it was believed that larger seeds will just give cause to less seeds per square metre – a zero gain being implied.

Grain weight, as measured by thousand kernel weight, is largely influenced by a kernel’s dimensions such as grain length and width. The genetic control for grain length and width is, however, not that easy to determine, and many studies into this are ongoing. Among these are notably efforts by the International Wheat Yield Partnership with which this project is aligned, together with our ARC-Small Grain (ARC-SG) pre-breeding partner, the Sydenham-laboratory.

Following from this collaboration and own initiatives, the SU-PBL and ARC-SG have been able to identify more than two dozen potential genetic markers that could aid in the selection for larger kernel size. This will enable us to screen large amounts of germplasm that include local as well as international contributions, casting the net as far as possible in order to identify the best genetic building blocks to add to our South African germplasm pool.

Before using any new genetic markers for genotyping germplasm, it needs to be validated by phenotyping the relevant germplasm. The problem with measuring a single kernel’s width and length as well as thousand kernel weight, is that it is time consuming and labour intensive. Repeatability of measurements is also a challenge.

Recent advancements in imaging technology are, however, enabling us to establish high throughput phenotyping pipelines that are able to measure single kernels as part of larger batches to determine kernel width and length, and also to rapidly calculate thousand kernel weight at a reasonable cost per data point. High throughput phenotyping is not just an activity performed using drones. 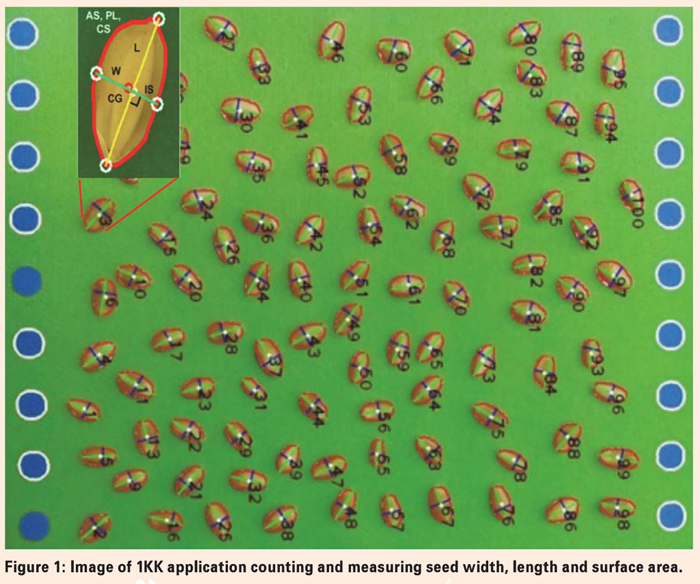 Several Android based applications have been developed by various international research groups over the past few years as part of similar efforts. Reinventing the so-called wheel is therefore not needed. The world of wheat breeding is after all a small one if you collaborate.

SeedCounter and 1KK are the most widely used. The applications identify length, width and area of an object (see Figure 1) and record the data in a format ready to export to a spreadsheet application. Thousand kernel weight can be ascertained by using various methods, ranging from counting by hand to vibration-based counters which are most commonly used. Again, newer technology based on laser imaging is making assessment much easier.

Our laboratory recently acquired one of these next generation counters, a Wintersteiger Seed Count S-25 plus. It can count hundreds of seeds per minute by imaging the seed-stream running through a circular laser-based imager every few milliseconds. It then calculates thousand kernel weight from this. Again, data can easily be exported to a spreadsheet application for further analysis. 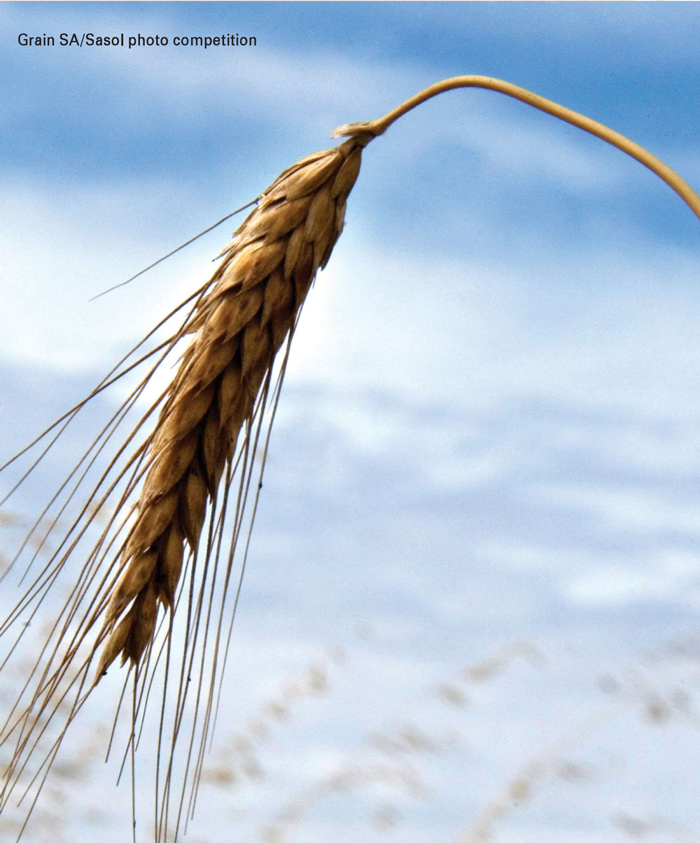 Thus far several hundreds of entries have been both genotyped and phenotyped over the past year. Preliminary data shows that a lot of the best alleles (variation of a gene expressing a specific trait) are already very common in both South African and international germplasm screened. This is, however, to be expected since grain size is such an important aspect of the wheat quality grading system that breeders generally are on the side of caution when selecting for this trait, thereby inadvertently narrowing the genetic base from which they breed. Expanding this genetic base for them to breed from is thus essential.

Not exploring this after so much work was done in order to relax our very stringent quality parameters (still very high) would be irresponsible. As a wheat breeder I can confidently answer that from our data thus far it is safe to predict that a part of improving the overall wheat grain yield of our future cultivars is improving our kernel size.

It will be marginal, but I would like to remind you of the legendary Sir Dave Brailsford who was the mastermind behind the British cycling team’s gold medal run at the 2008 Olympics which reinvigorated British cycling. Sir Brailsford applied the theory of marginal gains to his cycling team, and the aggregated effect of all the small gains in performance made them unbeatable.

In the next article I shall explore why water stress tolerance traits are part of this approach to improve wheat grain yield potential.