The Winter Cereal Trust and Technology and Human Resources for Industry Programme have invested in a rust resistance wheat pre-breeding programme at Stellenbosch University’s Plant Breeding Laboratory (SU-PBL) since 1998. The pre-breeding programme is based on a male sterility mediated marker assisted recurrent selection scheme, which was conceptualised and developed by the plant breeding laboratory.

Proven versatility of developed germplasm
The plant breeding laboratory was able to release annual nurseries consisting of several hundreds of lines that were used as crossing parents and/or as direct introductions by recipient breeding programmes for more than a decade addressing mostly disease resistance. Although the primary focus of the pre-breeding effort has been on rust resistance through a concerted effort, the base population has been improved to also display acceptable quality characteristics, a competitive grain yield and agrotype which assist in making nursery lines acceptable crossing parents for collaborators’ breeding programmes.

The material from the population, although aimed at a phenotype suitable for the Western Cape production area, has also proved suitable for use under irrigation and in other diverse dry land conditions.

Establishment of platform
With improved grain yield being the foremost identified need from a producer’s perspective, Grain SA facilitated the establishment of the National Wheat Breeding Platform in 2015, funded by the Department of Science and Technology as part of the national Bio-economy strategy, with the aim of improving on-farm grain yields.

The SU-PBL, ARC-Small Grain, Sensako and Pannar are all participants in the platform and during 2016 the Winter Cereal Trust also started making funding available. On 31 October last year the then minister of the Department of Science and Technology, Naledi Pandor, officially launched the venture during a visit to the Welgevallen experimental farm, Stellenbosch.

Pre-breeding aimed at yield improvement
Internationally a lot of momentum is currently gathering in this field and South Africa therefore desperately needs to capitalise on the new developments with regards to wheat genetics, improved breeding methodology and the complimentary agronomic practises that are currently being implemented. Given the proven track record of developed germplasm, versatility of the base population, experience in seed production and surrounding logistics in the distribution of nurseries, the plant breeding laboratory’s pre-breeding programme was dramatically expanded with the aim to include specifically yield related traits.

Objectives
In order to realise this new emphasis several objectives, formulated as work packages, were identified and are currently being pursued.

The second and third objectives are closely intertwined and involve germplasm development and screening followed by directed crossing. Crossing in the pre-breeding programme is based on the plant breeding laboratory’s male sterility (facilitated by a dominant sterility gene Ms3) mediated marker assisted recurrent selection scheme.

The fourth objective explores the use of molecular markers, and the plant breeding laboratory in conjunction with the ARC-Small Grain is busy with the identification, optimisation and implementation of yield related trait markers. This part of the larger project is also an International Wheat Yield Partnership – an international alliance aimed at yield improvement through international collaboration – aligned project.

High throughput phenotyping is the fifth objective and involves the use of drones (Y-framed, quad copters and a fixed wing) to facilitate digital imaging of breeding material. The drone platform can already be used to generate 2D and 3D data for field trials, which include plot based RGB and NDVI maps. The project is also in the process of deploying thermal camera technology this coming growth season that will assist in measuring canopy temperatures.

The most important objective from a stakeholder point of view is, however, the distribution of germplasm. As such, germplasm is annually distributed to stakeholders packaged as nurseries. During 2018, the 13th annual nursery was distributed and consisted out of 270 lines that could either be hand-sown (one package of seed consisting 15 g) or planted as yield plots (four packages of 100 g).

According to a 2016 survey among the recipient breeding programmes on average 44 selections per season are made and included as either direct introductions and/or crossing parents.

Capacity building is also a very important objective of the on-going project and each year several undergraduate Plant Breeding
students as well as Honours students in Genetics conclude their practical projects as part of the pre-breeding programme. Several postgraduate students have also concluded their studies over the past few years as part of the plant breeding laboratory’s pre-breeding programme and are now successfully employed in the wheat breeding industry, and/or larger breeding industry.

Breeding the future
Currently more than a dozen students are reliant on the programme for their projects and are contributing to the success of it. Over the next three issues we shall take a closer look at some of the objectives and the work being done by the plant breeding laboratory and its postgraduate students.

This is proof of how the laboratory is not only breeding wheat’s future, but also breeding a cohort of new wheat scientists. 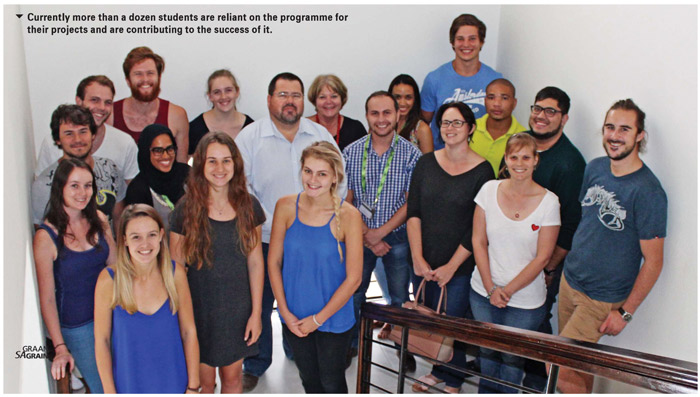