Wheat - what a versatile grain! 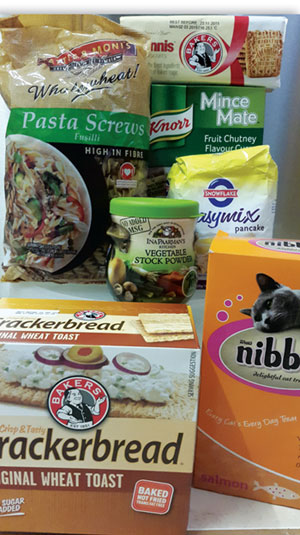 Wheat, as a small cereal grain, is one of the major grains used as a main staple food source for many nationalities and different social cultures around the world.

Wheat is one of the first plants known, that was domesticated in a region in south-eastern Turkey known as the Fertile Crescent about 9 500 years ago. Wheat production and its relative ease of being stored for later consumption was a key factor enabling the emergence of city-based societies at the start of civilisation.

It is highly nutritious, comes in a concentrated form as seed which can be grown and harvested by hand or mechanical methods, transported within a country or exported, readily stored and processed to produce a variety of highly refined raw foods.

Wheat is the leading source of protein in human food having a higher protein content when compared to the other major cereals like maize and rice consumed by millions. Wheat can have a range of protein percentages but most varieties fall within a range of between 11% and 13% protein. Protein levels found in particular varieties can be as low as 10% and as high as 15%. Carbohydrates make up about15%, dietary fibre about 33% with the balance being a very small amount of omega 3 and omega 6 fats.

Wheat and milled wheat flour contains gluten protein which enables leavened dough to rise. The yeast added to and mixed with milled wheat flour starts a fermentation process which produces minute cells of carbon dioxide gas. The wheat gluten protein in the dough traps the gas which causes the bread dough to expand or rise as it is commonly known. At a certain stage of fermentation the dough is baked in an oven at various temperatures to produce many different kinds of breads and related products.

Durum wheats, which are high in gluten protein, very hard, translucent, and light coloured are used to make semolina flour for pasta and bulgur products.

Wheat production that is surplus to human consumption needs or of low quality, usually due to excessive rain at harvesting is used as animal feed.

The health benefits of wheat depend entirely on the form in which it is eaten. Some wheats are processed into 60% extraction bleached white flour. This means that 40% of the original wheat kernel was removed. This portion contains the bran and wheat germ which is the nutrient rich portion of the seed. The remainder is just mainly composed of starch.

In the milling and sieving process over half of the vitamin B1, B2, B3, folic acid, calcium, phosphorus, zinc, copper, iron and fibre are removed. Products such as white bread, noodles, pastas, rolls, biscuits and cookies are made from such flour. In some countries the white bread flour has to be “enriched” with vitamins and iron.

This is why the powerful nutrition and health benefits of whole wheat bread products are being recognised by consumers around the world. Try and make some whole wheat bread for your whole family as a start in eating more healthy foods in general. Eating refined grains and the foods from them are being linked to weight gains and the development of insulin resistance and type 2 diabetes.

There are many other products not mentioned above which use wheat as a base. Wheat can be germinated and dried creating malt for brewing of beer or high alcoholic containing liquors, crushed or cracked, de-branned into groats. The outer husk or bran which is removed and separated in bulk during the milling process is an ingredient in porridge, muesli, crackers, rusks, gravy and many different types and brands of breakfast cereals.

The bran is also used in compiling rations for cattle and pigs.

As you enjoy your “daily bread” or cereal, one can give thanks for the many thousands of years of development and modern production of wheat which in either its natural and milled form provides food for millions in the world.