The ARC’s agricultural economists together with its researchers undertook a research study to establish the impact that resulted through the adoption of conservation agriculture (CA) technology. CA practice consists of three main elements: Minimum soil disturbance, maximum soil cover and crop rotation. These can be applied individually or together and at the same time. The research was done in collaboration with the Western Cape Department of Agriculture. Some of the objectives that were covered in the study included:

Wheat is by far the biggest winter cereal crop planted in South Africa. However, its production is not sufficient for domestic requirements and the country has to import wheat to meet its domestic demand. Wheat producers of the Western Cape traditionally planted wheat commercially using a monoculture system, but many of them have now adopted CA, among other reasons, to lower their production costs. Many of these producers were introduced to the CA farming system by a combined ARC and Provincial Department of Agriculture effort, in collaboration with officials from other institutions.

Literature reviewed during this research confirmed CA adoption locally and internationally. This verified that in the process of the adoption, producers needed continuous interaction with support groups and stakeholders. In most studies, production costs were compared with accruing benefits to demonstrate a favourable relationship between the two. Some studies advised that the CA benefits should be assessed carefully as some benefits could not be captured with conventional techniques that are limited to financial terms.

In this study, 51 CA producers were interviewed individually by the Western Cape Department of Agriculture officials using an ARC developed questionnaire. Data was captured and analysed by the ARC officials using both SAS Statistical Software and Microsoft Excel.

Results of the survey

39% of the respondents heard about the CA technology from other producers. The results showed that the dominant age of the producers was between 31 and 50 years. It could be inferred that middle aged producers were more active in adopting CA. 81% of respondents considered the application of CA as relatively easy and 98% reported that CA technology uptake was growing.

Although the level of adoption (early or late adopters) was not directly addressed in the survey, respondents were requested to indicate which of the three elements of CA they had adopted. This was used to develop a categorisation of CA adopters, indicated in Graph 1. 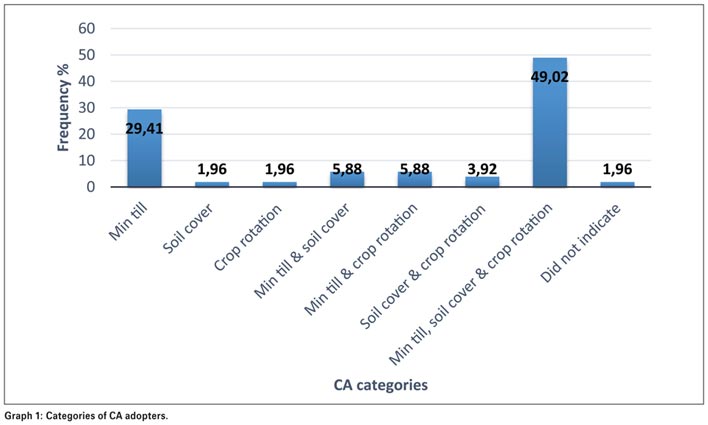 Although the sample size was limiting, it is important to note that the biggest group, consisting of 49% of the respondents, was practicing all three components of CA, followed by 29,4% who practice only minimum tillage. Looking at soil cover, 49% of the producers interviewed, leave crop residue on the land and 76% indicated that they used a crop rotation system. Those who did indicate the crops they used, mentioned lucerne, rye and canola.

As noted earlier, reasons behind participation in the CA farming system included increased total wheat yield and yield quality and improved weed management. More than 28% of the respondents simply argued that it was the “best” farming practice.

The assessments of impacts, including perceived financial, environmental, socio-economic and institutional impacts are summarised in Table 1, which displays the perceived extent of the impact that CA has on crop production, the inputs required and the elements involved. The appraisal by 51 respondents assessed whether specific criteria had increased or improved, remained constant or decreased. 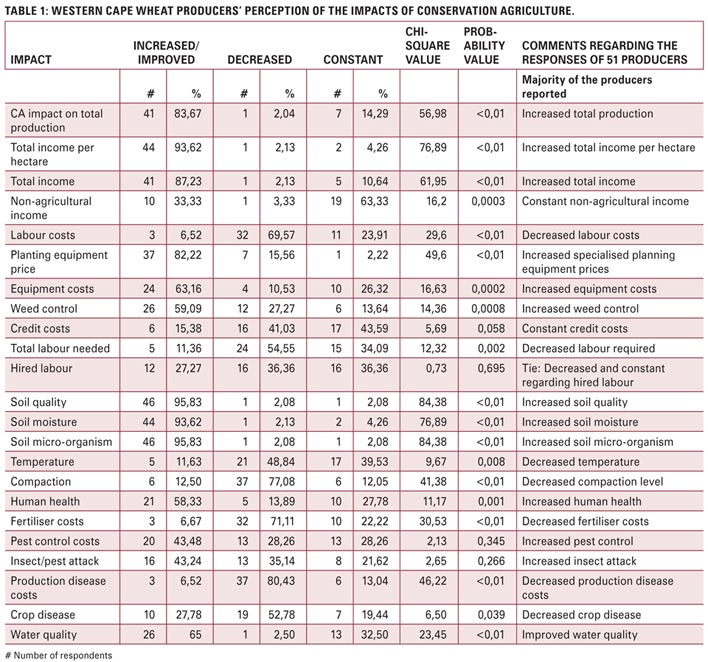 It was concluded that the uptake of CA technology was significant in the province. Since the majority of producers had adopted all three components and it could be inferred that those who have accepted one component would probably also adopt the other components in time. In the process of the adoption, producers would however still need continuous interaction with support groups and stakeholders.