The ARC and its Water Efficient Maize for Africa (WEMA) partners are pleased to share the news that the new maize drought trait, MON 87460, licensed from Monsanto as part of the WEMA project, has been authorised by the Executive Council for Cultivation (General Release) in South Africa.

“The authorisation for cultivation is a significant step forward not only in strengthening the fight against food shortages looming in the country, but also in the process of bringing new agricultural technologies to smallholder farmers in South Africa,” said Dr Kingstone Mashingaidze, research team manager: Plant Breeding and Country Co-ordinator of the WEMA project in South Africa. “This allows the ARC and WEMA partners to start the next stage of more extensive testing with the drought trait, and to stack it with the insect protection (Bt) trait in maize.”

It is anticipated that hybrids combining the drought-tolerant and insect-protection traits will be an option for producers in South Africa to plant within a few years pending final regulatory approvals.

The ARC launched two conventional drought-tolerant maize hybrids in December 2014. The drought-tolerance of these hybrids will be further enhanced by incorporating the drought-tolerance trait (MON 87460). At the launch event in 2014, Deputy Minister of Agriculture, Forestry and Fisheries, general Bheki Cele, said South Africa faced a challenge as only 13% of the land is suitable for crop production. This challenge is exacerbated by low rainfall, which often results in drought. Drought leads to crop failure, unemployment, hunger, and poverty.

Drought is one of the major factors that rob producers of good yields in South Africa. There are no simple solutions to ensure crop survival and yield in a drought. It takes a systems-based approach using all the tools available to help minimise drought damage. Producers must envisage a system that incorporates the best agronomic practices combined with using the best adapted varieties suited for their farm. The new drought trait alone cannot guarantee success, but producers can use it as another tool in their systems-based approach to help give their maize crop the best chance to survive and thrive in dry climates prone to drought.

“The ARC with its WEMA partners is excited to bring this new drought trait to the market for smallholder farmers royalty-free in South Africa. The next few seasons will be an important opportunity to do extensive testing and demonstrations to help producers learn how it can become part of their farming systems and help minimise the risk of drought,” said Mashingaidze.

The ARC has worked with the WEMA public-private partnership since 2008 to help develop drought-tolerant maize for producers in Africa and is excited about the progress towards turning research into seed that producers can plant to help manage drought stress.

“We are extremely proud of the authorisation as this innovative farming technology will certainly improve crop yields and advance agriculture in South Africa. This is a significant stride towards improving food security, increasing employment and enhancing the sector's contribution to national economic growth,” concludes Dr Shadrack Moephuli, chief executive officer: ARC.

The objective of the project is to improve food security and rural livelihood among smallholder maize farmers in sub-Saharan Africa by developing new drought-tolerant and insect pest-protected maize hybrids.

WEMA provides the technology royalty-free to all African seed companies for deployment to smallholder farmers. WEMA helps build technical breeding and biotechnology capacity as well as seed systems in Africa.

The ARC launched two conventional drought-tolerant maize hybrids in December 2014, and these will be sold under the brand name DroughtTEGO™. The drought-tolerance of these hybrids will be further enhanced by incorporating this new maize drought trait. WEMA is funded by the Bill and Melinda Gates Foundation, the Howard G. Buffett Foundation and USAID. 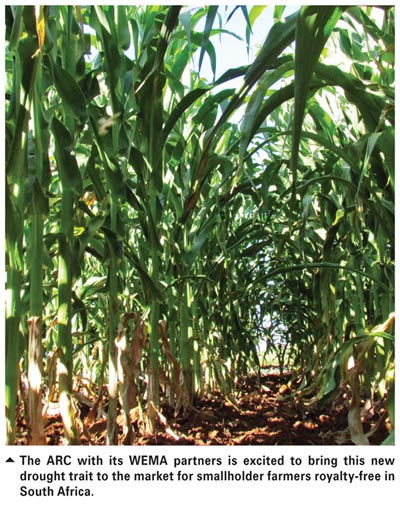