South Africa first experienced an outbreak of wheat stripe rust in 1996, caused by the biotrophic fungus Puccinia striiformis f.sp. tritici. A single race was initially identified and currently there are three races that have been found in South Africa.

The most dominating pathotype in the different wheat producing areas is 6E22A+. This race was first identified in 2005 and unlike preceding stripe rust races in South Africa, it is virulent on the resistance gene YrA.

Stripe rust is more prevalent when weather conditions are cool and wet as this is ideal for the proliferation of the fungus. Therefore, susceptible cultivars grown in cooler areas such as the eastern Free State are vulnerable to stripe rust infection.

Stripe rust is a variable pathogen consisting of pathotypes with different virulence spectra. Optimum weather conditions for the proliferation of stripe rust are temperatures between 10°C and 15°C and the presence of free water. During periods of hot and dry weather, infection ceases, but it often restarts during cool and moist conditions.

What can you do you when you suspect infections? 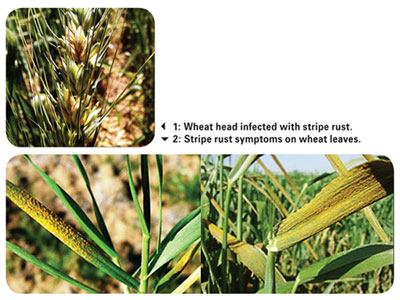 Firstly, a correct identification of the disease needs to be made. A typical sign of stripe rust is the presence of small, yellowish pustules on leaves and sheaths arranged in conspicuous stripes (Photo 1). In cases of severe infection on susceptible plants, pustules also form on wheat heads, and are easily identified by their yellow colour (Photo 2).

If stripe rust is correctly identified in the field, the use of chemicals is sometimes essential. However, certain factors should be taken into consideration such as, the growth stage of the crop, susceptibility of the cultivar/s used, yield potential and the costs involved in fungicide applications.

The timing of fungicide application is critical since plants are most vulnerable during the early growth stages and this is when most of the damage occurs. Spraying after the soft dough stage is often unnecessary as the chances of the disease affecting yield is low.

If the cultivar is susceptible, with a high yield potential, the timing of the fungicide application should ensure that the crop is protected especially during the kernel filling period.

Even during the absence of stripe rust, the crop needs to be thoroughly monitored up to the fully emerged flag leaf stage for signs of the disease.

Table 1 indicates fungicides that are registered for control of stripe rust in South Africa as well as the active ingredients of these fungicides. It should be remembered that it is better to apply a fungicide early rather than late. It is generally recommended not to spray after the soft dough stage as infections seldom result in a significant yield loss.

Planting stripe rust resistant cultivars can be beneficial to farmers and the environment as there will be little or no need for fungicide applications to control the disease.

A list of the recommended wheat cultivars and their stripe rust resistance status for the different regions are listed in Table 2. 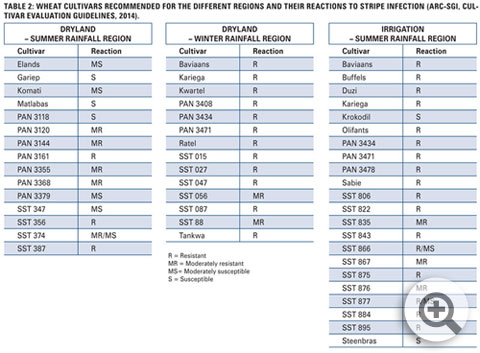 This research was made possible with the financial assistance of the Agricultural Research Council and the Winter Cereal Trust.