The annual KwaZulu-Natal No-till Conference took place at Drakensville from 1 to 3 September 2015. It was attended by 330 participants who experienced a range of oral presentations and practical demonstrations on conservation agriculture (CA).

Below is a synthesis of the key messages presented at this prestigious event on the CA calendar.

Soil health is the heart of sustainable agriculture

This idea is echoed in the following quote from Mr Hugh Hammond Bennett (1950): “Take care of the land and the land will take care of you.” The conference supported this statement with the message that soil health is improved through the quality application of the three principles of CA, namely minimal mechanical soil disturbance, permanent organic soil cover and crop diversity, including crop rotations, associations and the use of cover crops. These quality CA systems deliver multiple benefits in terms of yield, sustainability of land use, income, timeliness of cropping practices, ease of farming and eco-system services. It was emphasised that a change from conventional agriculture, including full tillage (CV) to CA with low external inputs, will be an incremental change, the rate thereof depending on the level of soil health, but one that nonetheless should be embarked upon primarily due to environmental concerns and the cost pressure of external production inputs under CV systems.

The latter apply all CA principles with little, if any, need for external chemical inputs, but it maximises the positive impact of diversity on soil health through crop rotations, cover cropping, ley cropping and livestock integration (see Figure 1). 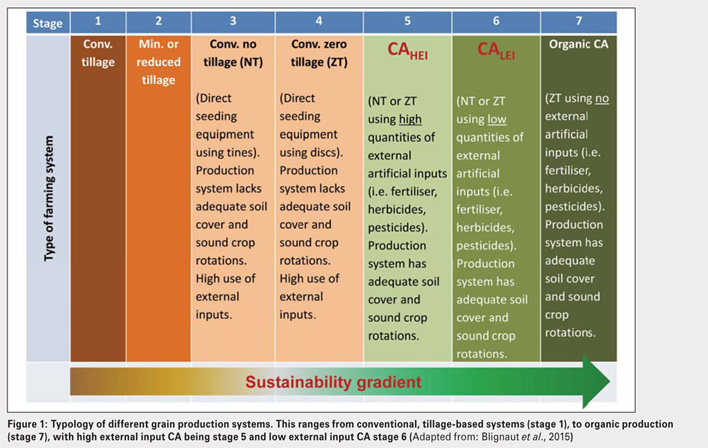 Take the lab into the field and into your own hands

This message was evident from some presentations, particularly from producers practicing CA, such as Messrs Cobus van Coller (Viljoenskroon, Free State), Rene Stubbs (KZN Midlands), Egon Zunckel (Bergville, KZN) and Anthony Muirhead (Winterton, KwaZulu-Natal), who have been adapting their CA farming systems through continuous experimentation and close observations of their soils, fields, equipment and resource flows. By using only a spade and your eyes, you can effectively be figuring out your soil’s quality and what the plants and roots say about your soil. Walk your farm; choose the best and worst places and observe soil profiles. An example of a very practical test for producers is the “slaking test”, which makes it possible to identify the quality of your soils in one easy exercise (see Photo 1).

The jar on the left shows a degraded soil or “dirt” that collapses when getting in contact with water, while a healthy soil on the right infiltrates and holds all the water like a sponge.

Various speakers, such as Dr Rianto van Antwerpen (senior soil scientists at SASRI) and Mr Victor Roberts (soil scientist at Cedara), emphasised the use of an auditing system and/or indicators, measuring the impact and progress of CA. Examples are: Soil structure, soil porosity, soil colour, number and colour of soil mottles, earthworm counts and other soil fauna, soil cover at planting, crop cover at six to eight weeks, soil depth, run-off and erosion, micro-organisms and roots.

Again, it is of critical importance for producers to choose and use indicators themselves, which will strengthen their discovery and learning process and help them to fully understand and take ownership of important concepts and practices. This can even go as far as taking a microscope to the field, identifying some of the weird and wonderful creatures and very useful indicators, such as the Tardigrades (commonly known as water bears or moss piglets) or soil mites (see Photo 2 and Photo 3). Mr Ruhan Theunissen from Reitz, presented how the quality of oil in a tractor’s engine could be an appropriate “dipstick” to measure and compare between systems.

The pioneer CA producer from Winterton, Mr Ant Muirhead, widely known as “Prof Muirhead”, supported by Prof Teague (see Photo 4), called for the revival of soil biological capital, which is a subject poorly understood by most, but central to soil health and sustainable agriculture. The growing academic understanding of soil biology has slowly made its way onto producers’ fields. However, aggressive tillage practices and excessive application of agro-chemicals, which still prevails in most parts of the country, has largely destroyed our soil biology. We will however have to put it back for CA systems to function maximally.

“Producers could tap the multiple benefits of soil microbial symbionts,” Prof Teague said. “We should be putting them back into the game.”

One of the key concepts to understand and to repair is that of the soil food web (SFW), which is the network and functioning of different groups of soil biota and the connections between them. This process is driven by photosynthesis, which uses carbon dioxide from the air, combines it with water, and turns it into carbon, of which about 40% is released as exudates by the roots into the soil, mostly in the form of sugars, with some carbohydrates and proteins. These carbon exudates are food or bait for soil microbes, which in return supply soil mineral nutrients to the roots. Prof Teague discussed one of the most important symbiotic relationships plants have, which is with arbuscular (tree-like) mycorrhizal fungi. In this symbiosis the fungus colonises two different environments – the roots of the host plant and the surrounding soil – connecting the two with its long hyphae (see Photo 5). 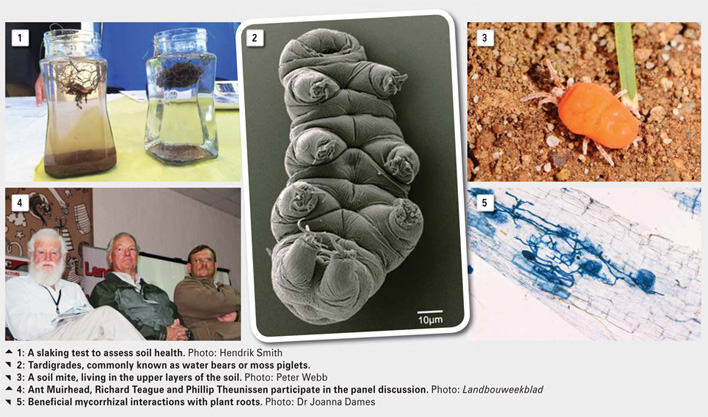 This enables the host plant to have an improved uptake of water and mineral nutrients conducted along those hyphae. This relationship has been documented in connection with many minerals, including phosphorus, nitrogen, zinc and copper. One way of getting a handle on soil biology, is to start measuring or analysing soil biological indicators; some laboratories in South Africa have been rendering those services for a while.

A separate session on the challenges and solutions of weed and insect management involved some agri-businesses in presenting their best practices. As a summary of this session, Dr Charlie Reinhardt (dean: Villa Academy), said that the benefits for sustainable crop production that are associated with CA practices are unequivocal.

From a weed management perspective, however, it removes the important method of mechanical control from the producer’s “toolkit”. This, to a large extent, makes practitioners of zero-tillage reliant on chemical control (herbicides).

The practice of cover crops for weed suppression is gaining ground in zero-tillage systems, for perfectly good reasons. It should be noted that this biological way of weed management is mainly based on chemistry. Dead plant material and live plants (weeds and crops) exude biochemicals that can inhibit the growth and development of not only plants (weeds and crops) but also micro-organisms. The phenomenon is called “allelopathy”.

This means that there should be knowledge about the nature of the chemicals involved, and the extent to which they can affect not only crops, but also beneficial soil micro-organisms. Back to synthetic herbicides…Over-reliance on a particular herbicide, in particular a specific mechanism of herbicide action, promotes not only shifts to dominant weed species that are hard to control, but even more importantly promotes the evolvement of weed resistance towards an herbicide, or to put it more accurately, weed resistance to a particular herbicide mechanism of action. Misuse (off-label usage) of herbicides has the same consequences.

The hard lessons learned in the USA and in South American countries regarding herbicide resistance must be taken to heart and preventative measures implemented in order to contain and even avoid the same problem from decimating profit margins of South African crop producers. Scientific investigation the world over has proven that containment and prevention of herbicide resistance can be achieved only through combining different herbicide mechanisms of- action, e.g. by using tank mixtures of different herbicide products, or ready-mixed herbicide formulations containing more than one active ingredient (= mechanism of action).

From a practical viewpoint, tank mixtures give the best solution because it gives flexibility based on the weed spectrum occurring on a particular field, at a particular point in time.

It is imperative that crop producers confront and effectively manage herbicide resistance, because it not only poses direct financial risk, but also indirectly through the distinct possibility that herbicides that are currently highly effective could either be lost or at least have their utility reduced.