Use of sunflower oilcake in dairy cattle rations

Primarily grown for its seeds, sunflower produces oil for human consumption and industrial use. In recent years sunflower is being grown in South Africa, primarily as a source of vegetable oils and the area under cultivation of sunflower is continuously increasing.

Sunflower meal, also called sunflower oilcake, is a biologically and economically useful protein source for cattle. It is the product obtained by grinding flakes after most of the oil has been removed by either solvent or mechanical extraction processes.

In general, ruminants can utilise sunflower meal with its higher fibre levels more effectively than other species. The high oil content in the mechanically extracted oilcake provides greater energy density, which is a valuable attribute for animals with high energy requirements such as dairy cows.

Sunflower oilcake constitutes the fourth largest source of supplemental protein for livestock feeding after soybean meal, cottonseed meal, and canola meal. The nutritive value of sunflower oilcake (Table 1) depends on the oil extraction process and efficiency, variety of sunflower and the proportion of the hulls removed during processing. Sunflower oilcake with hulls is lower in protein and energy (0,60 vs. 0,67 Mcal NEI/lb) and higher in fibre than dehulled sunflower oilcake. 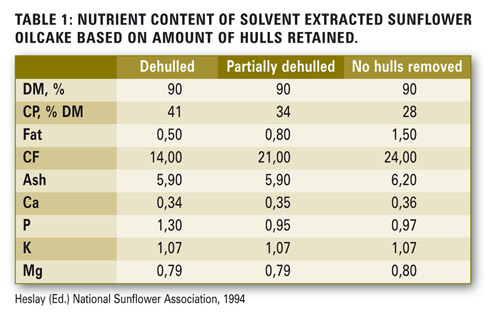 The oilcake of sunflower is very useful in many dairy cattle rations and can provide nitrogen required by rumen microbes in the form of rumen-degradable protein. Ruminal degradability of sunflower meal protein is often >60%, which is higher when compared to canola and soybean meal. Milk yield of dairy cows was found to be similar in diets containing partially dehulled or fully dehulled sunflower meals compared to soybean meal.

Sunflower meal’s energy value is lower than that of canola or soybean meal, due to the fibre level from hulls included in the meal. Reported nutritive values of the sunflower oilcake not always correspond to current commercial production, so procurement criteria should be based on product analysis from respective plants. Pre-press solvent extraction reduces residual oil to 1,5% or less, but residual oil is valuable as an energy source in all cattle diets.

The mechanical process of oil extraction leaves more residual oil in the meal, often 5% - 6% or more, depending on the efficiency of the extraction process. The high oil content in the mechanically extracted meals provides greater energy density, which is a valuable attribute for animals with high energy requirements, such as dairy cows. Lactating dairy cows often respond to supplementation of the diet with fat. Methods such as heat, formaldehyde and sodium hydroxide treatment are used to reduce ruminal degradation of sunflower oilcake proteins.

Sunflower oilcake is well utilised in young calves and growing heifers and it can be used as the sole source of protein in a variety of dairy cattle rations. The inclusion rate of sunflower oilcake in milking cow diets is often restricted because of its high content of ruminally degraded protein, and through ration formulations to meet specifications for CP and RUP.

Sunflower oilcake is commonly marketed and shipped as pellets and can be stored for extended periods of time. It is priced competitively with other co-product feeds and often is the lowest cost protein in regions where it is produced.

A European company (the Dortmund-based firm, SoBlex) has developed an extraction process which will generate two products. The hulls will be split from the internal seeds. The inner parts of the seeds are the valuable part of the sunflower and can be fed to fish and other production animals, while the fibrous hulls will be left for ruminants.