It is very important to conserve soil and water resources in South Africa, since there is no new land available for cultivation and also no new water resources to use for irrigation. Conservation through precision agriculture technology is the key to sustainable use of our natural resources.

Site specific management, also named precision agriculture, started off based on a single farm in the old days, then producers started to differentiate between fields, followed by zoning within fields. Grid sampling, where one sample is taken per 1 ha to 4 ha is the current method for identifying such management zones. The challenge thus lies in moving towards site specific soil and water management of every square metre, named ultra-precision.

For ultra-precision to be a success, a large amount of affordable, accurate and quality information about the possible limiting spatial soil variability is needed. A very popular way to go about characterising the variability of soil and to produce high resolution, good quality maps is by using bulk apparent soil electrical conductivity (ECa) sensors. Non-contact proximal ECa sensors are based on the principle of electromagnetic induction (EMI).

Sensor function
An EMI sensor consists of a transmitting coil at one end of the instrument that induces a circular eddy-current into the soil. Each current loop generates a secondary EM field proportional in value to the current flowing in the loop. The receiver coil on the other end of the EM instrument intercepts a fraction of the secondary field from every loop and the sum of the signals heightens and forms an output voltage related to ECa (Corwin and Lesch, 2005).

The most common EM instruments used in agriculture include the Geonics EM31 and EM38. The EM38 sensor is portable and designed to measure soils of the root zone. This area is typically to a depth of 750 mm when held in the horizontal (EMH) operation mode.

When placed in the vertical (EMV) position the EM38 takes readings at about 1 500 mm (Photo 1a and Photo 1b). The EM31 sensor measures at soil depths up to 6 m and is often used in characterising the presence of shallow water tables or salts in the vadose zone (Corwin et al., 2003a; Amezketa, 2007; Corwin and Lesch, 2005).

Anywhere from 100 to thousands of spatial ECa measurements can be taken with a mobile unit that takes continuous soil measurements (Photo 2). With the addition of a GPS system, measurements can be pin-pointed with 1 cm accuracy. Advantages of EMI include speed, ease, relatively low costs and large volumes of data collected.

ECa measurements
An EMI sensor measures the changes in the apparent electrical conductivity which is an average measurement for a column of soil to a specific depth. In reality the sensor does not measure just one soil variable but responds to many, because various soil properties influence the conductivity of a soil.

Variations in ECa are thus due to the influence of the combined conductances of many physical and chemical soil properties. Direct properties include the concentration and type of ion in the soil solution, water content, type and amount of clays, soil temperature and soil water.

ECa data application
Soil sampling is the most important phase in a soil survey and the methods used when sampling soils can have a large influence on the outcome of spatial variability studies. With a geo-statistical model-based sampling method, ECa survey data is used to identify optimal locations for soil sampling. The identified sampling sites represent ±95% of the variation in the ECa data.

Soil samples are needed to in situ calibrate laboratory measured soil properties to ECa data to establish a prediction model. The model can be used to predict and map soil properties for the remaining ECa measurements in the surveyed field.

This process of automatically selecting sampling sites saves the researcher time and effort. The amount of samples needed for calibration can be much less than that needed during systematic grid sampling. Thus, the workload and cost in the field and laboratory are much less than for the traditional methods.

In a Van’s Lab soil survey, the EM38 is set to measure ECa at a fixed rate of one measurement per second. The survey density depends on the crop, transect spacing and the hectares (Table 1). 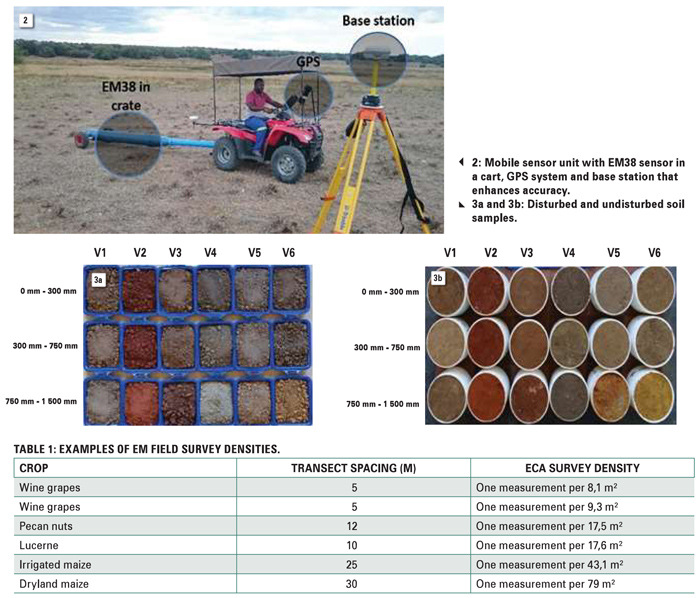 Ultra-precision in ground truthing of soil properties is now a reality through EMI technology. For more information on the field services (EMI survey), taking of soil samples, soil classification, analysis of soil fertility and soil physical properties, and data visualisation in the form of attribute maps, contact Lindi Smit at 076 897 1512 or vanslab.africa@gmail.com. 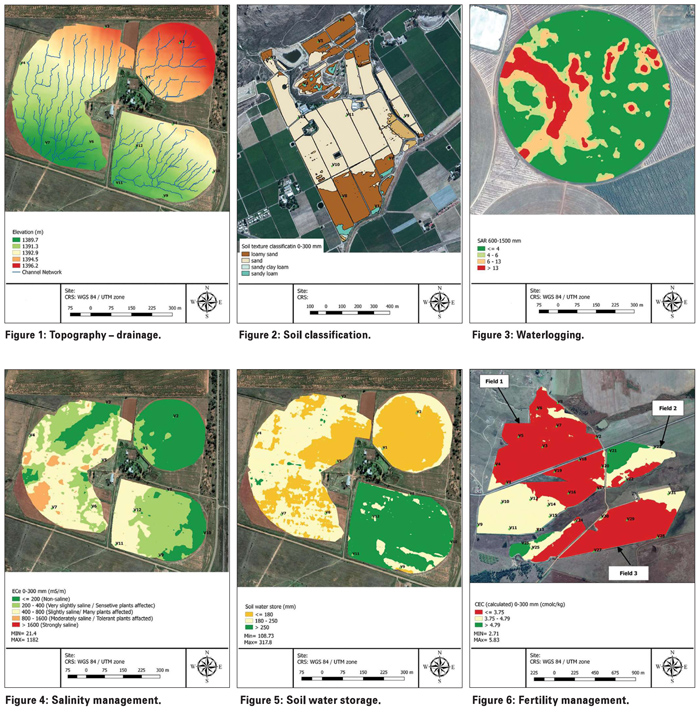