THE WHEEL TURNS - THE SHOE IS NOW ON THE OTHER FOOT 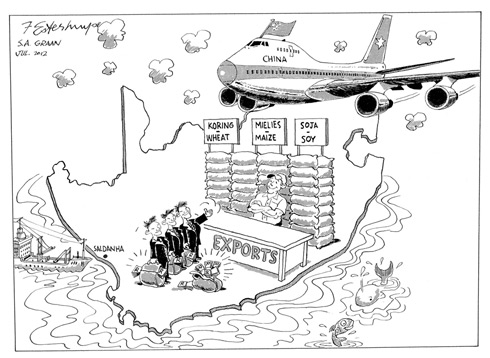 Sometimes you stick your neck out and make some observations which you believe are right, but over the recent long weekend, Freedom Day confirmed it.

A full Chinese delegation visited the Western Cape to do nothing less than to purchase wheat! We were quite impressed with the extent of the homework they had done. Grain SA was still preparing to explain to the delegation about our quality etc when they mentioned that our quality compares with that of USA Dark Northern Spring and Canadian West Red Spring.

It is suitable for their four and five star hotels whilst the standard quality wheat can go to other local Chinese markets. This was like music to the ears of Western Cape producers. The work done by Grain SA last year when the Chinese visited us, definitely bore some fruit.

China proposes large investments to upgrade the Saldanha harbour facilities, obviously to guarantee the supply of minerals, but then there are also the carry-over benefits for the grain industry. Furthermore, they have also made available a number of bursaries to invest in the proficiency of our people.

During April 2012, Grain SA has also submitted a new application for a higher wheat tariff and made urgent presentations to the government to actually do something about the policy (in this instance the tariff policy) to improve the food security regarding wheat.

All indications are that the area planted to wheat will be the lowest in many decades. With additional new, potentially large-scale buyers at our front door, the dynamics are definitely shifting. Should we get a favourable change in the wheat tariff as well as buyers willing to price South African wheat for the quality it is worth, the fat will be in the fire!

Part of the challenge is obviously to not act irresponsibly. On the one hand there is the market (partially temporary, partially permanent) that basically sells grain to the highest bidder and on the other hand there is the local market that is more permanent and which forms part of South Africa’s food security.

The balance between a high wheat tariff to stimulate local production and thereby guarantee food security, will definitely be weighed against profitable exports of grain to a world that continuously becomes hungrier.

I am carefully optimistic that we have here a change in wind direction as far as winter grains are concerned, that might for the first time in decades point to some fat years ahead. Although this is but music of the future, it does bring a fresh breeze of hope to the ailing wheat industry.

If Grain SA is interpreting the coded messages in diplomatic corridors correctly, July 2012 is going to be the month during which the South African and Chinese protocols for maize will be signed.

Our Minister’s visits to China have definitely delivered benefits for South Africa’s grain industry. It also seems as if South Africa’s current soybean surplus will become part of the agreement in the future.

It reminds me of the Afrikaans sport song we sang in my primary school years, that can roughly be translated as: “It’s lekka to be a grain farmer, yes!”