The value of biotechnology in crop production 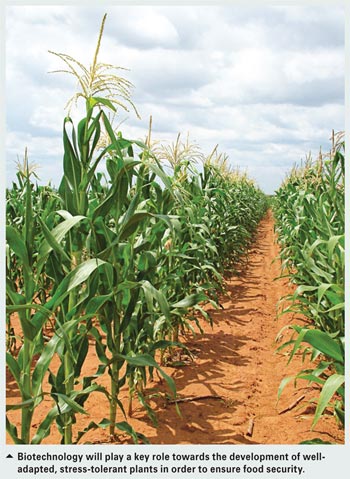 From the beginning of time, producers have always manipulated plant and animal genetic material (DNA), whether directly or indirectly.

This is the process that brought about the domestication of animals as well as plants by intentionally selecting for better individual performers. Producers then fully exploited the natural variation towards producing even better crops, trees and animals.

In modern days, the role played by breeders has not deviated from that played by early producers. Plant breeders use variation that exists within each crop to produce superior varieties. Producers gain access to the varieties and plant them in large numbers for economic purposes.

Conventional breeders rely on the use of classical genetic principles based on the phenotype or physical characteristics of the organism concerned. They have used this approach for many years to introduce desirable traits into crop varieties.

This is really a lengthy process as many generations would then be required before the combination of all desired traits is found. Not only is the process time consuming, it is also very expensive. The adoption of biotechnology makes conventional breeding far more efficient.

Modern agricultural biotechnology involves a number of tools that breeders utilise to understand and manipulate the genetic make-up of organisms for use in the production and processing of agricultural products. We have tools available that can be used in the increasing and stabilisation of yields; tools that can be used to improve resistance to pests, diseases and lately to abiotic stresses and lastly tools to also enhance the nutritional content of foods.

Very importantly, we have tools that generate unique genetic fingerprints that both the breeders and producers can use. These fingerprints can be used by breeders to check if there is any infringement with the plant breeder’s rights and likewise to attain genetic purity in their breeding material. The fingerprints are also used in the maintenance of the genetic resources that the ARC has.

These tools are collectively called DNA molecular markers. The markers are segments of DNA that we use as indicators for the presence of the target genes. Keep in mind that all traits that producers and breeders are interested in, are controlled by the genes; singularly or as a group of genes.

Breeders cannot depend on phenotypic or visual selection alone. There are certain important traits that the breeder cannot easily select for without the intervention of molecular tools. For example, in breeding for lines with an improved resistance to a particular disease it may not be easy to visually detect the presence of more than one gene in a line.

Some genes, although present in a line, may not all be expressed, thus the breeder may throw out a potential line. However, with the use of molecular marker tools we are able to accurately tag the genes. Markers are completely independent of the environment and thus the detection of one or more genes will not be affected. Another advantage of using markers is that the detection can be done at the seedling stage without having to waste time and effort for the plant to mature.

An example in Figure 1 is where we had crossed a disease resistant bean plant with a susceptible one. We attained the F1 generation, self-pollinated it to obtain the F2 generation that showed a segregating pattern. We were able to help the breeder pick up resistant plants (R) that emulated the donor parent, pick up susceptible plants (S) that emulated the recipient parent and the intermediate plants (I) that showed various disease reactions. The intermediate plants clearly possessed segments from both parents and were segregating for the disease.

Another example in Figure 2 is where we generated genetic fingerprints for use by the breeders. One breeder had to investigate whether the three samples used in making crosses were in fact similar or different. To the breeder’s surprise, the analysis revealed that samples 1 and 2 were similar and sample 3 completely differed from the rest. 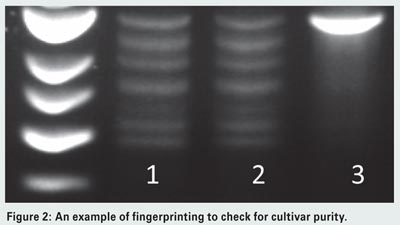 The breeder was now in a far better position to make informed decisions about future crosses to be made.

With the recent advances in plant biotechnology, biotechnologists will continue working very closely with plant breeders and pathologists. The latest technologies allow us to focus more on discovering gene(s) that control certain traits.

Certain traits, such as yield, prolificacy, drought-tolerance and some diseases are highly complicated. Biotechnologists will continue applying the latest technologies to dissect these complex traits to make it easier and more efficient for the breeders to operate. Accurate phenotyping, backed by advanced molecular technologies will make any breeding programme function optimally in a quest to release superior varieties.

As we all know, the climate is changing and the plants quickly need to adapt. Biotechnology will thus play a key role towards the development of well-adapted, stress-tolerant plants in order to ensure food security.

For any queries, comments or more information, contact Lebogang Madubanya at madubanyal@arc.agric.zaor 018 299 6229.