THE SUN WILL ALSO SHINE AT NIGHT! 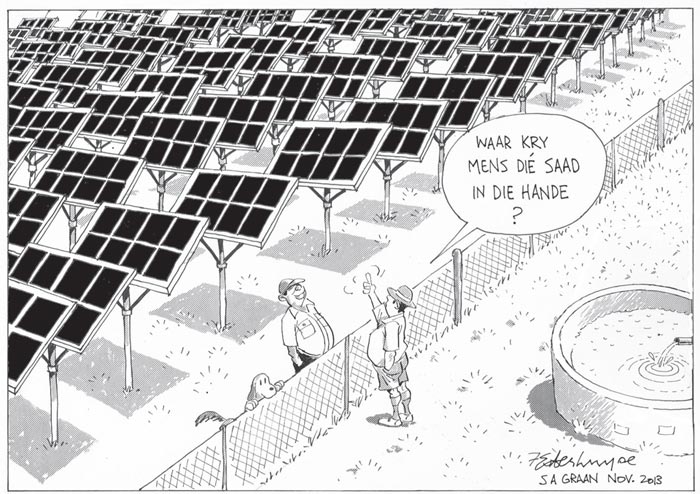 This month’s theme for the SA Graan/Grain magazine is about energy and water management – two resources without which not only producers, but the whole of humanity cannot exist.

One of my first experiences of electricity and the resource it is, coincides with my experiences as a child when I had to sleep alone in the blue room with only a single candle to provide light at my grandfather Brandkop’s (also the name of the farm) farm.

In later years we were old enough to go to the out buildings to crank up the Lister engine to generate light for the house. What I will never ever forget was the unbelievable quietness that prevailed when we had to switch off the engine later at night. It was the cold southern Free State air of the July holidays; the bright stars and the absolute deathly silence when the Lister finally died off. Thank goodness the dogs were always around to accompany us back to the house!

Now it seems like electricity supply has almost come full circle. We are again beginning to reach the stage where producers will have to start generating their own electricity supply. This time round, however, it does not depend on the availability of electricity, but rather the affordability thereof. The tariff increases have forced producers to become more creative; not only to save power and work more efficiently, but also to exploit new sources of energy. Sun panels and bio-energy are our destiny.

Fortunately the next generation will not have to walk down the passage with a candle like I had to, but the future source of our energy will be from the farm sheds, the fields or from the sun. Agriculture has never shied away from making a new start, but we are going to need a few new partners to overcome this hurdle.

To turn maize into fuel or electricity is not within everyone’s ability or reach. What is true, however, is that the scope and opportunities are there to now already start investing in. It is very clear that we as the grain sector have an opportunity here to not only manage our own consumption, but also to generate our own energy and possibly later sell it. A totally new branch of industry for your farm.

The challenges of flood irrigation and windmill pipes falling into the borehole; a house without water and making hot water in a half filled 44 gallon drum to be able to enjoy a bath, are all stories for another day. Today every producer’s lifeline is water!

It is not a reality for irrigation farmers only, but for every farm. Without water we will not have food. Our country’s water resources must each year be shared among more and more people. Will the price of water also force us to use it differently? I seem to remember that it was minister Trevor Manual who on occasion remarked that we can still make a plan to generate more energy, but that there is no substitute for water. If we only considered our society’s consumption of water it is clear that there lies a very difficult road ahead of us. We seem to waste and contaminate water as if there was no end to it.

I want to close with a story that happened in New Orleans in the USA where, over a weekend, I was in a laboratory with an official of the Wheat Board (Dr Sierk Ybema) busy doing falling number tests on American wheat in the process of being loaded on a ship destined for South Africa. My job was to wash the test tubes and Dr Ybema was doing the tests.

The water tap in the laboratory was opened all the time and every time I passed it I, as my mother taught me, closed it. At one stage the American working in the laboratory “caught “ me while I was closing the tap and asked me why I did it since, he explained, it was a waste of time to open or close the tap each time.

I explained to him that where I came from we did not even allow a tap to drip. He just responded: “Look out of the window. The Mississippi river runs two miles wide here; there is no chance that we would end up without water.” Needless to say, that I just looked him in the eye, and closed the tap again.