Maize in Africa is attacked by many lepidopteran pests. In South Africa, there are three economically important stem borer species that attack maize, namely the African maize stem borer (Busseola fusca), Chilo borer (Chilo partellus) and the pink Stem borer (Sesamia calamistis). These species cause severe damage to maize and crop loss varies depending on the time and level of stem borer infestation.

AFRICAN MAIZE STEM BORER
The African maize stem borer (Photo 1) has three distinctive moth flights per season (Figure 1). Plants are infested by either the first or second stem borer generation, depending on the planting date of the maize. Female moths lay their egg packets behind the leaf sheaths of the plants. Newly hatched larvae are dark brown in colour and become lighter as they mature. 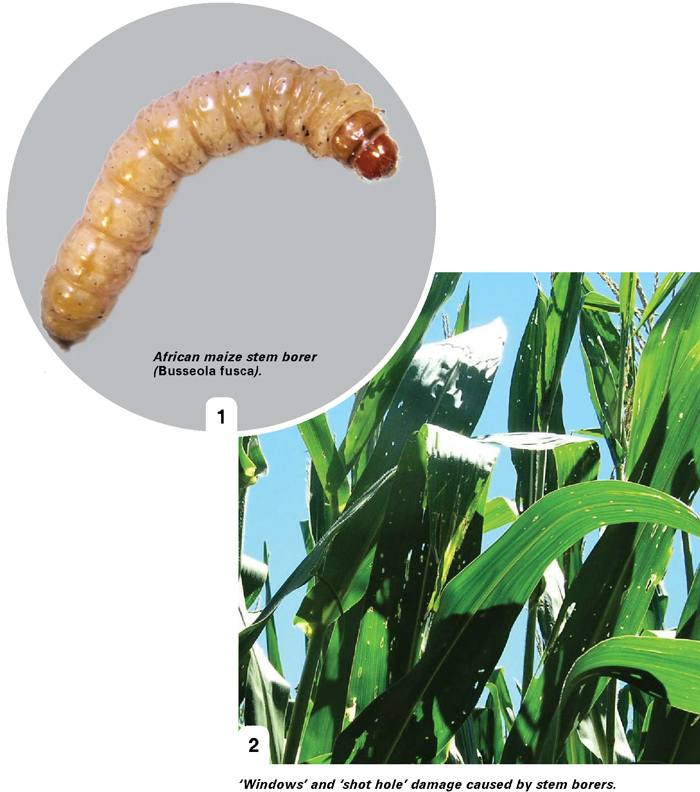 After hatching, the larvae migrate upwards to the whorl leaves where they begin to feed and remain for a long period before burrowing into the stem. Larger larvae feed through the rolled whorl leaves resulting in visible rows of holes as leaves grow out. Damage symptoms of this stem borer therefore manifests as ‘windows’ and ‘shot holes’ on whorl leaves (Photo 2). If the stem borer damages the growth point of the plant, it leads to ‘dead heart’ symptoms. The duration of the larval stage is about six weeks after which larvae become pupae. Larvae that did not pupate will overwinter in stubble residues, which is the main source of infestation in the following season.

CHILO BORER
The Chilo borer (Photo 3) has a much shorter life cycle compared to that of African stem borer, which leads to a large-scale overlap of generations and a continuous increase in larval numbers. Chilo borers can have up to five generations per season. Moths lay overlapping egg batches on both the upper and underside of leaves that appears as yellow spots on the leaves.

Larvae are creamy white in colour with dark spots, which is why Chilo borer is also referred to as the spotted stem borer. Larvae migrate to the whorl and feed for about 10 to 14 days before entering the stem. Damage symptoms are similar to that of the African stem borer. As the winter season approaches, the larvae become inactive and overwinter in stems or behind leaf sheaths. 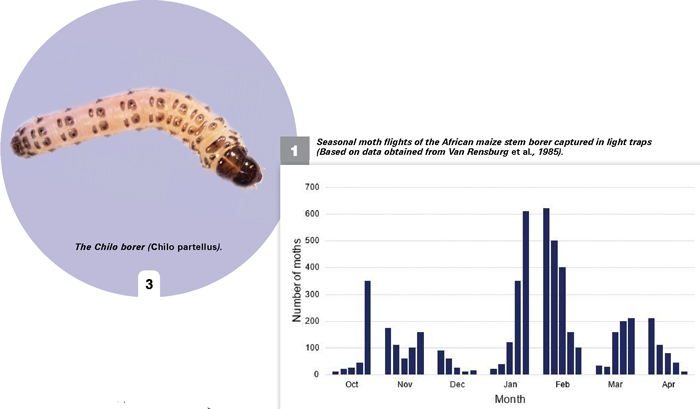 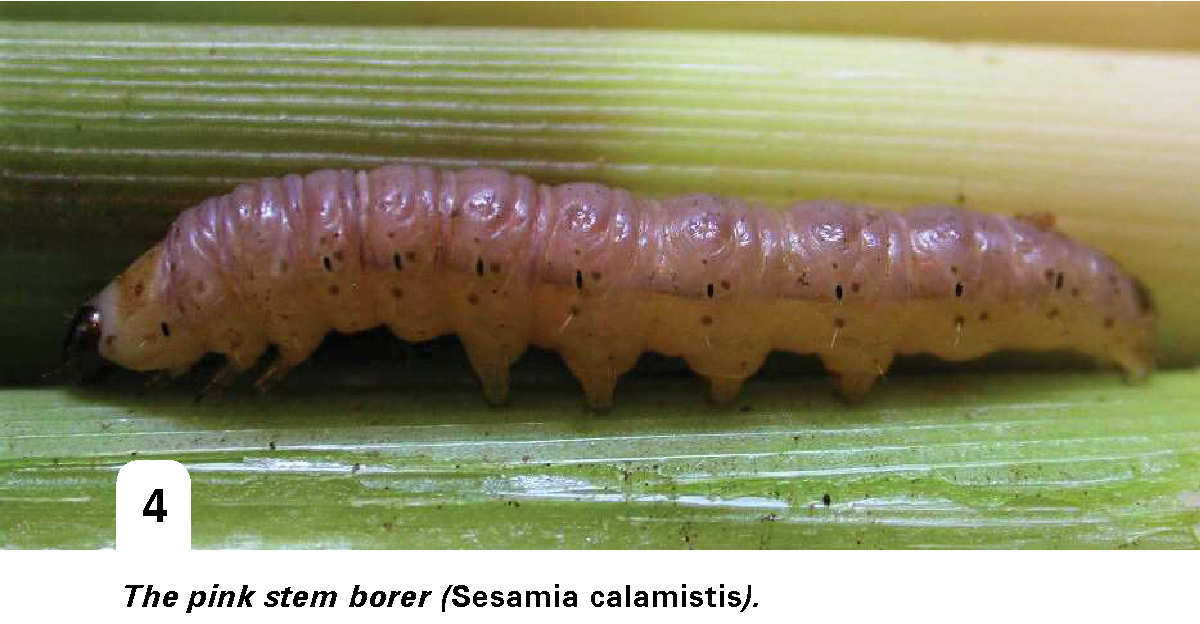 PINK STEM BORER
The pink stem borer (Photo 4) mainly occurs in coastal regions where it is an important pest but inland infestations has been on the increase. The moths of this species lay eggs behind the leaf sheaths of the maize plants and neonate larvae that hatch here, penetrate the stem directly while others that hatch from the husks will enter the maize ears (Photo 5). This behaviour differs from the other borer species, whose larvae move to the whorl and do not penetrate the stem directly.

‘Dead heart’ symptoms are, therefore, the first visible damage symptoms because larvae enter the stem directly and do not damage the whorl leaves. Generations overlap to such an extent that individual generations cannot be distinguished. Larvae develop throughout the year and do not enter a dormant winter state 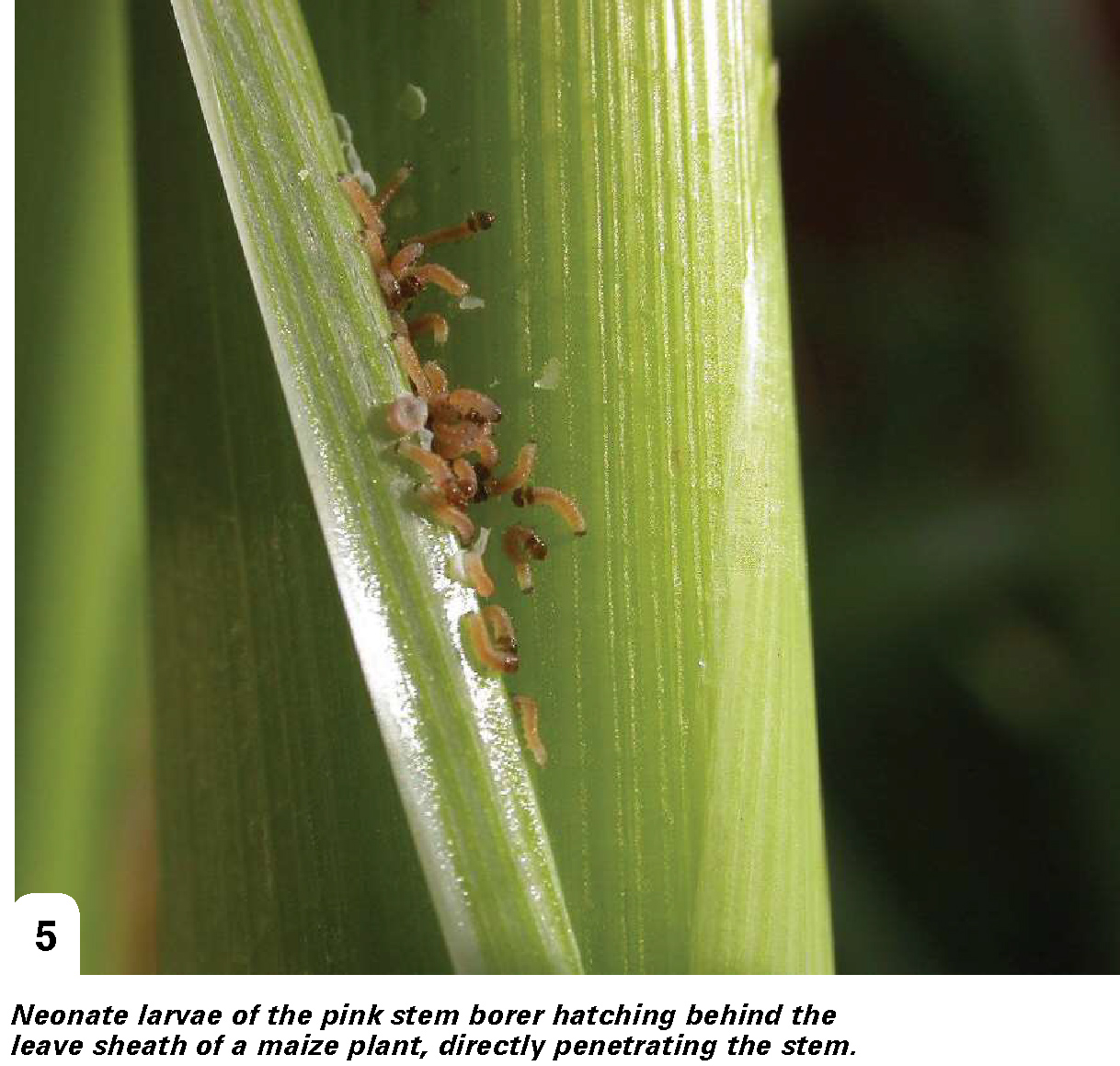 CONTROL
Bt maize was introduced into South Africa to control all three stem borer species. The Chilo borer and pink stem borer are successfully controlled by both Bt genes commercially available in South Africa. The African maize stem borer, on the other hand, is well controlled by the latest Bt gene commercially available but showed resistance to the first Bt gene released in South Africa. It is therefore very important to make use of the high dose/refuge strategy in order to prevent resistance development.