Mr Japie Grobler, chairperson: Agri-Sector Unity Forum (ASUF) opened this discussion, but he first made a heartfelt appeal to young farmers to get involved as they are the ones who should care about the future.

Their main goals are to contribute towards effective policymaking that is in the best interest of all South Africans and advocate consensus positions to stakeholders. Consensus positions have been developed on land reform, rural safety, water, employment and labour and infrastructure. He remarked that arriving at consensus was no small achievement.

Grobler emphasised the need for government, organised agriculture and the agri-value chain to work together to find common solutions for the challenges facing land reform. Fundamental to this is the acceptance that it is in the best interest of all South Africans that land reform succeeds “within the context of maintaining the productive capacity of the land”.

Basic principles of ASUF are:

Since land reform is a national policy, a broad community, which includes government, organised agriculture, the agri-value chain, role-players and the broader public, must all benefit and contribute towards it.

The NDP should be the guideline for the process. It is believed it will enable a rapid transfer of land to preciously disadvantaged individuals without distorting land markets or business confidence.

Some of ASUF’s suggestions are:

Mr Schalk Pienaar, chairperson of Agbiz, stated that land reform will only be successful if the goal is viable, sustainable and promotes and sustains economic food production.

Furthermore it will only succeed with the right jockeys/beneficiaries and broad stakeholder and value-chain involvement. Beginner farmers must be allocated commercially viable, sustainable units and be given security of tenure from the start to stand a chance of success. Meaningful contributions from financiers, extension services and experts are essential. He added it is important to view this as a long-term process which must operate on free market principles. Pienaar also said that land reform can not only be current landowners’ problem alone.

20 years on and no blood has been spilt and millions have been spent on restitution, redistribution and reform, but he maintains that land reform has not delivered land to black producers, the money has not been spent well and disillusionment has set in.

If we continue to do more of the same we will waste more millions. There is no proper strategic framework guiding land reform capturing both the NDP and the mood of the citizens. Current proposals by government are not viable or scientific.

He contends that land value destruction post acquisition is severe and a new approach is needed. Makenete proposed ownership of land be transferred from Rural Development and title given to the Land Bank which will issue long-term leases to farmers so that land can become an asset for the producers and give them an opportunity to move forward. 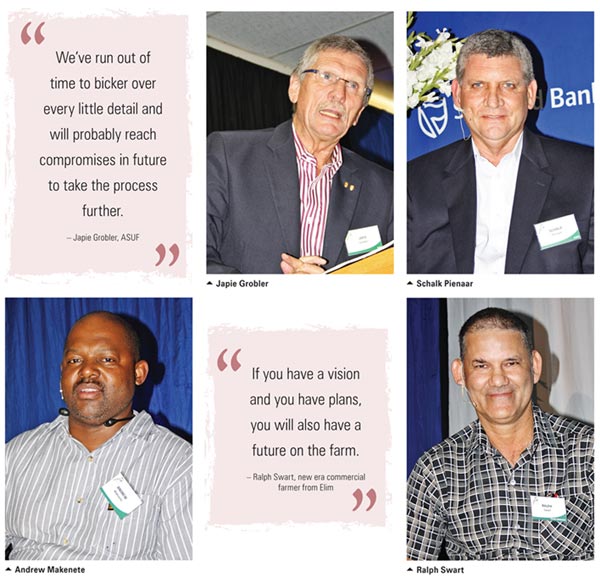