The nitrogen replacement value of soybean on a following maize crop

Nitrogen is one of six macro elements that is taken up by grain crops from the soil and as the demand usually exceeds the supply, application of nitrogen containing fertiliser is required. Leguminous crops, of which soybean is a member, however, is an exception to this rule. 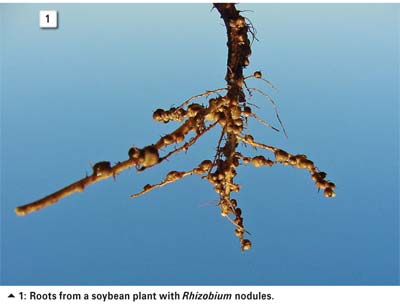 They have the unique ability to supplement the soil supply through a symbiotic nitrogen fixing process with Rhizobium bacteria. The bacteria penetrate root hairs on young growing roots and forms the well-known root nodules (Photo 1).

Symbiosis is a beneficial cohabitation between organisms. In the case of Rhizobium and soybeans, the bacteria live on the energy supplied by the photosynthetic process of the plant. The bacteria in turn, fix nearly inert atmospheric nitrogen, N2, into compounds useful to the soybean plant.

To take advantage of this symbiotic process, nitrogen fertilisation of soybeans is not recommended, except on sandy soil where the residual nitrogen supply is usually low. Small amounts of nitrogen fertiliser are therefore recommended on such soils for enhanced growth of young plants.

Inoculation of the seed or soil, with a specific Rhizobium specie, Bradyrhizobium japonicum, associated with soybean, is very important as it does not occur naturally in South African soil.

The yield increase over years is about 13% on sandy textured soils.  Rotated maize usually shows no nitrogen deficiency symptoms while it often appears in monoculture maize during the reproductive part of the growing season (Photo 2a and Photo 2b).

The popular interpretation is that some of the symbiotic fixed nitrogen is still available for uptake by the soybean following maize crop.

The yield of monoculture maize is usually lower than that of maize preceded by a soybean crop, no matter the amount of fertiliser nitrogen applied. This shows that other factors aside from nitrogen are responsible for the yield increase of soybean rotated maize.

Several possible explanations, some with supporting evidence, have been presented. Among them are the carry-over of soil moisture from the soybean to the follow-up maize season, an improvement of the soil’s physical properties, a decrease or increase in growth suppressing or promoting substances respectively and a decrease in disease pressure.

Decreases in maize root diseases probably also play a role in our environment. According to pathologists, root rots with varying intensity and extent can be found on nearly all maize plants annually. Root rots damage and kills parts of the root system especially during the reproductive phase. The root system is consequently restricted and the uptake of moisture and nutritional elements is limited, eventually affecting the growth and yield.

Trials at Viljoenskroon showed that the root system of maize following soybean measured after pollination were 16% larger than that of monoculture maize. This value agrees well with the maize yield increase found.

Generally, maize take up only about 50% of applied fertiliser nitrogen. This efficiency of nitrogen uptake can however, vary between 20% and 80% depending on circumstances. The enhanced performance of maize following soybeans is most probably the result of an increase in the efficiency of nitrogen uptake, through a larger and probably healthier root system rather than a larger nitrogen supply in the soil.

In addition to the maize yield improvement, the nitrogen fertiliser application rate on maize following soybean can be lowered therefore improving the net return even further. The question is with how much?

The answer is explained through Graph 1 where the yield response of maize grown in rotation with soybean and in monoculture is compared from trial work done on a sandy soil near Viljoenskroon. Note that the term ‘nitrogen replacement value’ of soybean is used rather than the more popular ‘nitrogen credit’ due to the crop’s nitrogen neutrality. 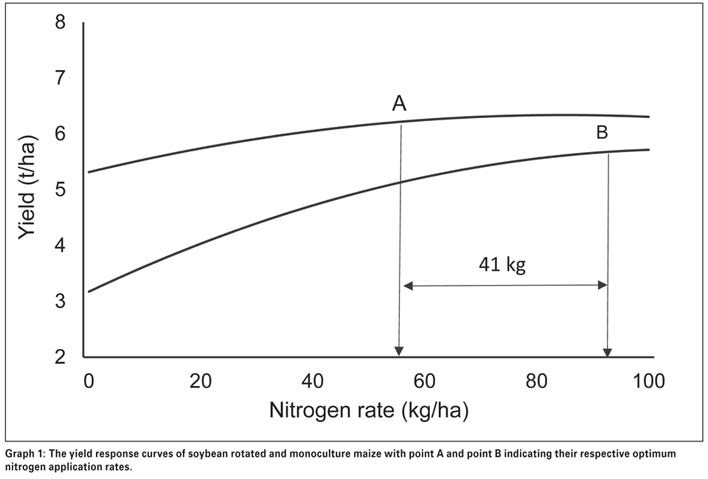 The yield response of maize in crop rotation with soybeans (upper curve) is different from that of monoculture maize (lower curve) as shown in the graph. Point A and point B represent yield at the economically optimum nitrogen fertiliser rate for maize in rotation and in monoculture, respectively.

The yield at these points is 6,53 t/ha for the soybean rotated maize and 5,9 t/ha for the monoculture maize, while the corresponding optimum nitrogen application rates are 54 kg/ha and 95 kg/ha respectively.

The nitrogen replacement value of soybeans in this case is 95 kg/ha - 54 kg/ha = 41 kg/ha. This value agrees with that found in the USA, but is not applicable everywhere as it can be influenced by various factors.

Indications exist for example, that soil with higher clay or organic material content will have a lower nitrogen replacement value than sandy soil with a low organic material content, such as those on which the trial was done. Some evidence also indicates that the nitrogen replacement value will be smaller where no-till is practised in comparison with conventional tillage.

With the limited information currently available, it seems relatively safe to reduce the nitrogen fertilisation rate of monoculture maize on sandy soil, with 20 kg/ha - 30 kg/ha for maize following a soybean crop.

Maize can thus benefit in two ways from the preceding soybean crop. Firstly by the yield enhancement which is often present and secondly from the saving on nitrogen fertiliser. To take advantage of these benefits, soybean should be followed by a non-leguminous crop such as maize rather than other dicotyledonous crops with which it have several diseases in common.