The land issue: We need to negotiate now

One of the red flags which Chantell Ilbury and I have identified for South Africa turning into a failed state like Afghanistan and Somalia, is land grabs. Of the four flags we have, it is probably the most lethal and emotional.

The heated controversy stirred up by Dr Pieter Mulder’s remarks earlier this year shows what a tinderbox issue land is. It would appear that you can use history to justify any views you wish to take on the subject from preserving the status quo to turning the whole place upside down. No issue divides citizens more deeply.

I am more interested in the future than the past and the one thing this country has shown the world is that when push comes to shove, people here can negotiate sensibly with one another. We did it in the early 1990s with Codesa 1 and 2 and we can do it again.

We need to get the major players in the agricultural sector around a table including the commercial producers, the emerging farmers, Agri SA and other representative bodies, government and Land Bank delegates, union officials, rural community members and subsistence farmers and anyone else who is important in determining the outcome of the game.

I would suggest a 10-point agenda for this Agridesa or whatever you would like to call it. It is the one Chantell and I use whenever we facilitate strategy sessions for companies and other organisations. We have, however, found that the model works just as well when you bring disparate players with conflicting interests together to debate the best way they can cooperate with one another to produce a mutually acceptable result.

Obviously there has to be give and take and nobody can pursue their own end-game to the exclusion of everyone else. The objective is to maintain a viable game where no one emerges as an outright winner or loser, the alternative being the destruction of the entire game with abnormal losses for every party to it.

The agenda is as follows:

In order to consider what is possible in taking the game to a higher level, one must understand how the game has changed over the past 10 to 20 years. Agriculture is totally different now to what it was in the 1990s. Food on this planet is becoming scarce and, as a friend of mine said, there is no planet B. Indeed, environmental degradation is reducing the productive potential of our one and only planet.

On the other side, population growth is ensuring rising demand for food products and hence higher prices. Why else do you think the Chinese are buying fertile land in Australia, Indonesia and Africa? Under context, one must also come closer to home and examine why the programme for transforming land ownership in this country has so far been slow and yielded so few successes.

Every playing field has boundaries and it is important to determine them. In this case, there has to be a fairly precise definition of the problem that has to be resolved. Are we talking about physical land which has to be transferred from white into black hands or are we talking about dividing up farming businesses on a more equitable basis?

There is a big difference between the two as the one calls for exchange of title between individuals, while the other calls for the kind of solution that has already taken place in manufacturing and mining, i.e. changing the ratio of equity ownership. What about vacant land and land owned by the state? Does scope only cover farm land or does it extend to land used for other activities such as game reserves? To arrive at acceptable answers, you have to understand exactly what the question is and focus on it, disregarding all other issues.

This part of the conversation follows logically from the previous one. Now that we have established the playing field and its boundaries, who are the key players on the field and how are they going to add value in terms of producing a constructive result to the game? How are the large agribusinesses going to share their expertise to give emerging farmers a greater chance of success? Who are the ideal sources of capital to finance the deals that need to be done?

What should be the rules of the game to ensure that the transformation process is orderly and maintains security of food supplies? This is a sensitive area as one of the principles that have to be debated is the willing-buyer/willing-seller one. Equally, what rules will apply to foreign ownership?

What are the surprises that one should have on the radar screen so that they do not deflect the game from a positive outcome? How does one prepare for them or mitigate their impact? No game is ever smooth and one must develop the ability to adapt one’s strategy when necessary. For me, one of the big uncertainties is how the global and South African economies will perform during the period allocated to resolving this issue. It is much tougher changing things during economic hard times.

At this stage one should construct a gameboard showing good and bad outcomes and ask where South African agriculture is on the board at the moment. The two axes should represent the two main concerns of the players and the scenario for each quadrant should have an appropriate title. See Figure 1 for my best shot at an illustration. 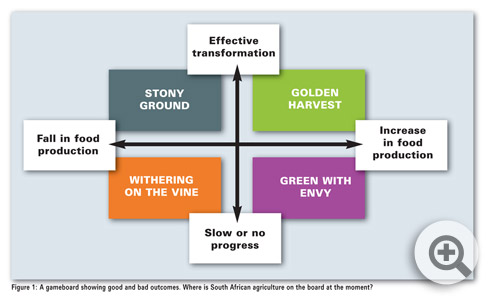 Going clockwise from bottom right, “Green with envy” is a scenario of increasing hostility to existing commercial producers as they grow their businesses without any improvement in owner representivity. It remains a white preserve.

“Withering on the vine” is where food production falls domestically as existing producers are loath to re-invest in their farms as a result of all the uncertainty surrounding land ownership. South Africa has to pay through the nose for food imports.

“Stony ground” likewise is where there is a fall in local food production because the seeds of transformation have not been properly sown. Many emerging farmers fail through lack of support.

“Golden harvest” is where true representivity is achieved among farm owners, but at the same time improvements in productivity are elicited because the environment for investment has stabilised. Everybody understands the rules and they don’t change.

Successful black commercial producers cooperate and vie with their white counterparts. So where is the South African farming industry now and where is it heading? How can we make it go in the right direction?

This is a transitional series of questions before the agenda gets to the business end of the negotiations of what to do. What are the strengths and weaknesses of South African agriculture at the moment and what are the opportunities and threats posed by the changes in the international food game? In other words, where do we stand internationally and what strategies can we pursue to raise our attractiveness in the eyes of local and foreign customers in the food business?

What are the available options within the control of the parties around the table to move South African agriculture towards the “Golden Harvest” scenario? What are the strategic options in setting a new direction and what are the tactical options to improve the chances of getting there?

Who around the table is going to do what by when in order to get the show on the road? A hard timetable with hard targets has to be agreed at this stage of the Agridesa proceedings. It will not be possible to come up with a complete list of actions into the long-term future and many of the initial decisions will be around examining the optimum way of executing the options at the top of the list of priorities. The second phase will be the actual implementation.

10. The meaning of winning

It would be first prize for the government to be the lead actor in arranging an Agridesa. If they are unwilling to do so, a neutral body like the South African Institute of Race Relations could be the organiser. Remember failure to act urgently on this issue will result in what Anne Robinson says to the loser each night on The Weakest Link: “You leave with nothing.”

This article was published on www.news24.com on 29 February 2012 and is published here with permission from Clem Sunter.