The invasion of the fall armyworm in South Africa

Since the first fall armyworm larvae were collected in the Settlers area mid-January this year and reared through to moths for identification, Dr Vivienne Uys (ARC-PPRI) made the positive identification in early February as Spodoptera frugiperda (JE Smith) (Lepidoptera: Noctuidae).

From there on the requests for identification from producers have increased and soon this pest was reported in Limpopo, Mpumalanga, North West Province and Free State (Figure 1). This pest has struck us like lightning and now we have more questions than answers. 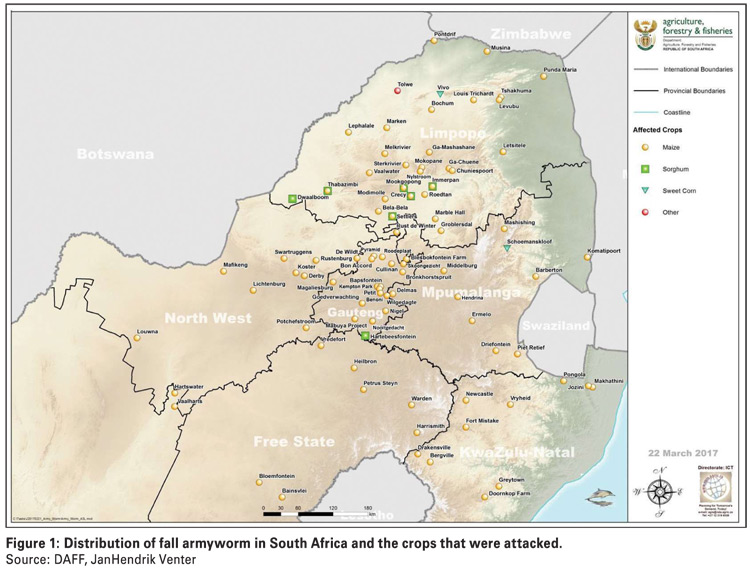 The fall armyworm has invaded South Africa in January, after reports of invasion in West and Central Africa. This species mainly established in maize fields in South Africa. Other crops that were attacked in South Africa were sorghum, sweet corn and potatoes. The first observation of fall armyworm on the Africa continent was made in late January last year on maize in the rainforest zone of South- Western Nigeria and in maize fields at the International Institute of Tropical Agriculture (IITA) at Ibadan and Ikenne.

Later that season high numbers of fall armyworm were also reported from northern Nigeria, Benin and Togo. In April last year government of São Tomé and Principe called for assistance from the Food and Agriculture Organisation of the United Nations (FAO). Thereafter, in June last year, the Federal Government of Nigeria reported fall armyworm on maize in Edo and adjacent states in the southwest of the country. This pest then spread through the rest of Africa, travelling southwards to South Africa in a little bit more than nine months.

Description and life history
The life cycle of the fall armyworm is about 24 to 30 days in favourable temperature and humidity. The number of generations occurring in an area will vary with the appearance of the dispersing moths. This species does not have a diapause (overwintering) stage.

Eggs
The eggs are dome-shaped with a flat base and curves upward to a broadly round point. Eggs are lain in egg batches attached to foliage. Egg batches vary, but can be 100 to 200 eggs.

A female moth can lay more than a 1 000 eggs. The female deposits a layer of greyish scales over the egg batch, which appear furry. The duration of the egg stage is two to three days depending on favourable conditions (Photo 1a and Photo 1b). 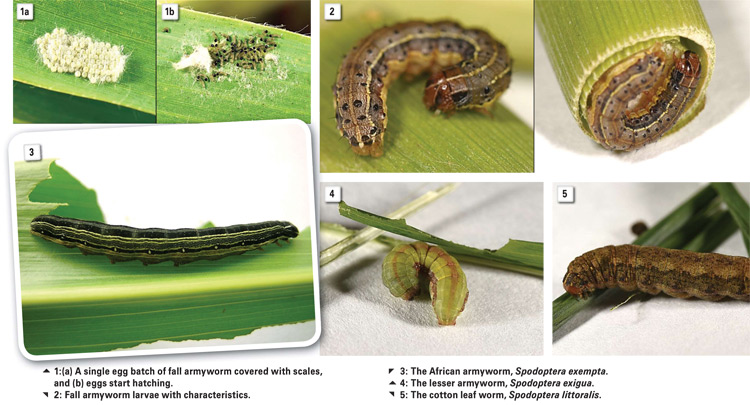 Larva
Newly hatched larvae are green. Colour change as larvae mature. Larvae are smooth-skinned and vary in colour from light tan or green to nearly black. Three yellow-white lines run down the larval backs. On each side of the larval body, next to the yellow lines, is a wider dark stripe.

To differentiate the fall armyworm from other species a predominant white, inverted Y shape is present on the forehead between the eyes (Photo 2). The duration of the larval stage can be as short as 14 days in summer. Unlike other armyworms, larvae feed during the day and night.

Pupa
Pupation normally takes place in the soil, but can also, if soil is too hard, take place by webbing together leaf debris. In the soil larvae construct a cocoon with soil particles with silk to pupate in. The duration of the pupal stage is about eight to ten days during the summer.

Adult
The moths are strong flyers and have a wingspan of 32 mm to 40 mm. Moths are active during the night. The forewings of the male moth are shades of grey and brown, with triangular white spots at the tip and near the centre of the wing. The female forewings are less distinctly marked. The hind wings are silver-white in both sexes. Duration of the adult stage is about ten days.

Host plants
Fall armyworm is polyphagous which can attack maize, sorghum, Bermuda grass, soybean, cotton and beans. It is reported that fall armyworm larvae can attack over 60 species of plants representing more than 20 families.

However, it has a definite preference for graminaceous hosts and will probably confine its attack to these crops if continually available. Because of its wide host range, this specie is one of the most harmful pests threatening annual crops in tropical regions.

Damage
Larvae cause serious leaf feeding damage as well as direct injury to the tassel and ears. Larvae can cause damage to nearly all maize stages of development, but will concentrate on maize plants that have not yet silked.

The most common damage is to late pre-tassel maize. Maize plants often recover from whorl damage without reduction in yield. With tasselling larvae may partly or totally destroy young ears, which is more important than leave damage. Usually damage is found in patches in the field.

It is also important not to rely on one control practice. Integrated pest management should always be kept in mind. In collaboration with the Department of Agriculture, Forestry and Fisheries (DAFF) a list of insecticides registered to control fall armyworm is available (Table 1). 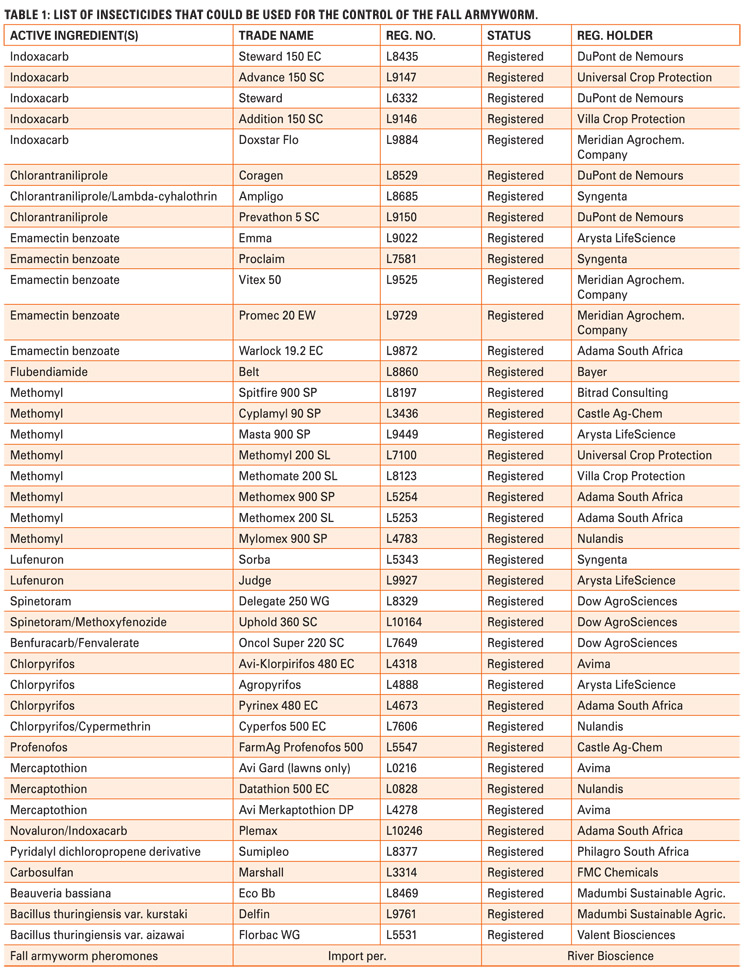 Genetically modification
Bt technology has been used to control fall armyworm with success in other countries, however to protect the technology it will still be important to scout for damage in the crop and to have additional control strategies in place. Resistance of fall armyworm to Bt maize has been reported in Puerto Rico, Brazil and the south-eastern region of the US. Therefore, insect resistance management and integrated pest management are still important.

Natural enemies
Because the fall armyworm is invasive in Africa, it is not yet known which natural enemies will play a role in attacking this species. However, the nuclear polyhedrosis virus is an important mortality agent for fall armyworm in the US. A total of 63 individual parasitoids are also reported, which belongs to the two orders of Diptera and Hymenoptera, as well as potential pathogens and predators in Latin America.

Pheromone lure
Pheromone traps can be used as an early warning. To optimise pheromone lure captures for fall armyworm, it is essential to have the correct blend of components. Therefore, if pheromone traps are used it should be kept in mind that the two strains of fall armyworm have differences in sex pheromone composition and that the different combinations in the lure can affect the amount of male moth captures.