The influence of cover crops on the flow of fodder, stock and cash

Cover crops and grazing them are becoming increasingly popular. Initially the cover crops were only planted, but these days they are also used as a source of fodder for the stock. Although this system always appears nice, it also has pitfalls and problems.

The aim of the system is mainly to improve soil health, retain cover on the soil and increase biodiversity. It is important to realise that this is a production system with which producers have to become comfortable. Profits have to be ploughed back in order to expand the system, but there should also be a shift in assets.

Producers have to understand how the system works, what the most important aspects are, and how these aspects can complement or penalise one another. The cover crops produce a certain amount of material that can be utilised by the stock, and it is the task of the producer to ensure that there is enough fodder for the stock for every stage of the year. The first two ‘flows’ that should therefore receive a lot of attention from a producer are feed flow and stock flow.

THE IMPORTANCE OF FEED FLOW
Every fodder crop that is planted has its own production curve. Some crops start quickly, grow fast and decline rapidly. Other crops start out slowly, but continue growing for longer, with a peak in production that realises only considerably later. Given the crops that are planted together, a certain quantity of fodder will be produced.

It is important for the producer to know how much fodder will be available when. If possible, you should also determine how the crop will perform when the fodder is grazed. Decide whether there will be enough regrowth to leave the required cover and whether the stock should be managed to leave sufficient material to ensure a good cover. It is important that there should be sufficient cover after the grazing and that enough living roots remain behind in the soil.

The nutritional value of the fodder will determine how the animals grow. It is important to know what the energy values of the different sources of roughage are. These values of the different crops are expressed in metabolisable energy (ME) and as MJ/kg. The total digestible nutrients (TDN) of fodder is also important information – it is a further indication of the energy value of the fodder.

Energy absorption (in terms of TDN or ME intake) sets the pace for production. The higher the animal’s energy intake, the higher the production is – provided the other essential nutrients are consumed in the correct proportion and quantity. If the animal has a high energy intake but the protein intake is too low, the animal’s system will start breaking down the muscles to supplement the protein deficiency. For optimal utilisation of the nutrients consumed the energy and protein intake should therefore always be in a specific ratio. For each production function or stage the animal requires a certain amount of energy to ensure optimum performance. The producer must ensure that the ratios between the elements are always right. 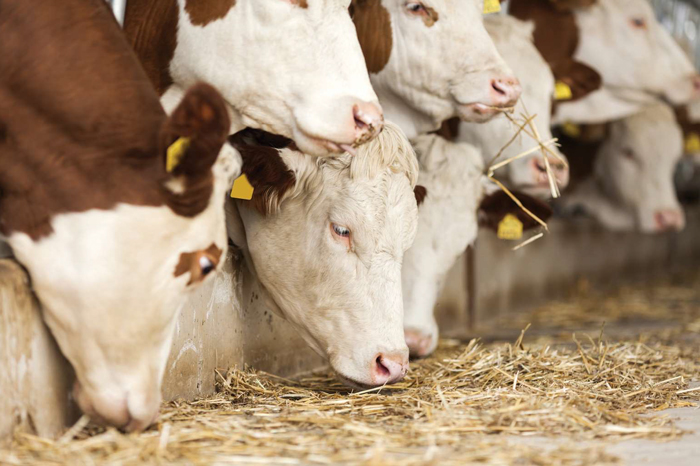 To ruminants, dry material is the basis in terms of which their fodder consumption is expressed, whether it comes from veld or from cultivated pastures. All fodder must be converted to dry material to be able to compare them. The rule of thumb is usually that every animal will consume approximately 3% of his body mass as dry material. A weaner weighing 200 kg and growing 500 g per day will therefore require approximately 6 kg of dry material, together with 518 g protein and 3,4 kg energy. There are various tables that indicate animals’ nutrient requirements. The Nutrient requirements of domestic animals of the National Research Council (NRC) is a very good source that is used widely in the industry.

It is important to establish the production of every crop that is planted. It must then be converted to dry material in order to establish how many animals can be maintained. If the crop that was planted is known, the combined composition of the fodder must be determined. Determine the moisture percentage, protein composition and energy content of the crop. This fodder composition will determine what additional licks must be provided.

From Graph 1 it is clear that the amount of fodder differs during the season. With the extra cover crops, more fodder is available in the summer, while the amount of fodder in the winter is less. With the additional cover crops, there is approximately 325 tons of dry material extra. This means that the producer will have to reconsider his utilisation of feed. The weeping lovegrass could perhaps be cut and baled and fed to the stock in winter, or perhaps the weeping lovegrass can be used as bales or as mature sward with secondary regrowth as grazing for the livestock.

The cover crops can also be used on a small scale to make silage, but just make sure that you get cover on the soil again in some way. Some producers already make silage in silo bags, and the quality of the feed is very good. This silage can be fed to the animals later, when they are not yet market-ready. A high-energy diet can also be considered to ensure that stock are market-ready when they are slaughtered.

When cover crops are brought in, the entire stock management system must be adapted, but the reasons why the cover crops were initially planted should not be forgotten. It is essential that there should be sufficient cover after the grazing and that enough living roots remain behind in the soil.

THE IMPORTANCE OF STOCK FLOW
As soon as the fodder sources on a farm are adapted, the stock have to adapt too. With the cover crops the carrying capacity can be easily over- or underestimated. You should therefore cut a sample and weigh it to obtain the correct figure.

Not only will the stock numbers have to be adapted, but the stock production system too. It is vital for the meat produced on the cultivated pasture or cover crops to be marketed. It does not help if the cows are in prime condition and then return to the veld to lose the fat there. The fat must be sold. With the additional summer cover crops you can look at oxen production or consider keeping the calves for longer. This will ensure that the first year will have an enormous impact on the cash flow and on the feed flow.

The farm in the example can accommodate 300 cows in a weaner system. If the cover crops are planted, more stock will have to be kept to utilise the additional 325 tons of dry material. If we assume that a weaner eats 10 kg of dry material per day, and that the animals have to remain there for 120 days, it would mean that the 325 tons of dry material can provide an additional 270 animals with food. Producers should know that the stock have to be there when there is surplus food – in this case from December up to and including March. The stock can be purchased or, if the feed flow permits, own calves can be held back to market them later. In this case the stock will have to be purchased.

It is vital to remember that the stock have to be taken to the grazing, and not the other way around. Stock are equipped with their own milling and transport machines to convert grazing to meat.

CASH-FLOW IMPLICATIONS
Expanding a stock component to graze the cover crops will dramatically increase the operating capital needs of the business. Provision now has to be made for establishing the cultivated pastures, for the stock to utilise the grazing, and for the additional operating capital to get the animals market-ready.

In this system the main expense– roughly 85% – is purchasing the stock. If we assume that the weaner price is R30 per kilogram and that a calf weighs 220 kg, you will have to budget for R1 782 000 to purchase the additional 270 animals.

​This capital outlay must be managed very well. Meat prices are very elastic and this will determine the profits to a great extent. It is true that cover crops have a hidden income. The subsequent crops planted on cover crop fields can perform better and this can increase the profits of the system. Without taking the additional income as a result of crop rotation into account, the system can show a profit of approximately 12%.

When the cover crops are established, do not make your initial steps too big. Grow into the system – use the profit you make to expand the planting of the cover crops. If this type of system is to become a long-term part of the farming, consider selling unused assets to convert this capital to buy stock. This will definitely increase profits.

Future articles will refer to grazing of cover crops, and to the additional fodder to be provided to finish stock on grazing.