The importance of self-regulation in heavy vehicle transport

The Road Transport Management System (RTMS) was originally developed and implemented in the forestry industry in KwaZulu-Natal and Mpumalanga. Based on an Australian model, the scheme seeks to promote compliance with standards in the areas of load control and securement, vehicle maintenance and driver wellness.

In line with the Department of Transport’s National Overload Control Strategy, its aim is to encourage heavy vehicle operators, consignees
and consignors to take more responsibility to ensure that their loads
are transported legally. The RTMS can thus be defined as an industryled, voluntary self-regulation scheme that encourages consignees, consignors and road transporters to implement a management system that preserves road infrastructure, improves road safety and increases productivity.

Its key components are load optimisation, driver wellness, vehicle mainte-
nance and productivity. The RTMS-standards consist of the SABS documents ARP-067 Parts 1 to 3.

During the first five years of the RTMS, participation was largely limited to transport operators in the forestry industry, primarily because the scheme was being strongly supported by Mondi and Sappi. As a result of a broader marketing approach, which included RTMS-awareness workshops in all the main centres in South Africa, participation has spread to a wide range of industries in South Africa, most notably mining, partly as a result of support by Eskom in the coal industry.

A number of RTMS-certified operators have observed significant benefits as
a result of implementing the RTMS-standards. These include a reduction in accidents (three companies have recorded a 50% reduction in crashes over
a period of two to three years), an improvement in fuel consumption, reduced tyre wear, reduced driver absenteeism and improved driver motivation and fault reporting.

As of February 2012, there were 45 RTMS-accredited companies/depots, representing approximately 1 600 trucks. Most notably, 25 of these compa-
nies/depots were certified for the first time during 2011. 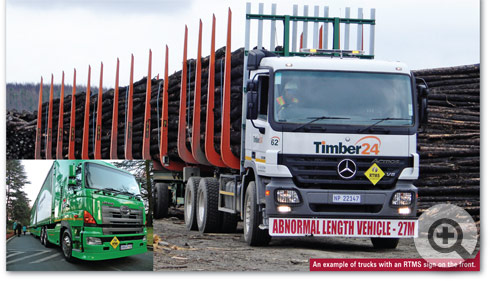 The Department of Transport developed a National Overload control strategy in 2003. An essential element of this strategy is the control of consignors and consignees of goods.

The legislation enabling the control measures for consignors and consignees was already drafted in 2003 and was eventually promulgated as part of the National Road Traffic Amendment Act, 64 of 2008. The Act was implemented on 20 November 2010, but regulations stipulating the specific provisions that will apply to consignors and consignees, still need to be published to make the legislation effective.

Section 74A and 74B of the Act as well as section 75(zB), (zC) and (zD) allows the Minister of Transport to regulate consignors and consignees.

Sec 74A. Act or omission of manager, agent or employee of consignor and consignee

Sec 74B. Proof of certain facts

Section 74A requires a consignor and consignee to take all reasonable steps to avoid overloading a motor vehicle and in the event of a prosecution the consignor or consignee must be able to show what steps he has taken to avoid the overloading of vehicles.

The effect of the legislation on consignors and consignees are

The regulations required in terms of the relevant sections of the Act have been drafted and circulated to various parties for comment. It has not formally been published for comment in terms on the National Road Traffic Act, 1996, but is due to be published in the next few months.

The gist of the draft regulations is

The new legislation should have a very positive effect on the percentage overloaded vehicles on the road, but consignors and consignees will have
to ensure they can comply with the requirements, as there will be costs involved in compliance with the legislation.