The future of sunflower production in South Africa 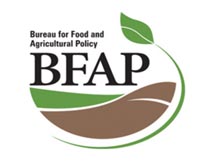 — a study by the Bureau for Food and Agricultural Policy (BFAP), funded by the Oilseed Advisory Committee (OAC)

FERDI MEYER and GERHARD VAN DER BURGH, both from the Bureau for Food and Agricultural Policy

Over the past two decades, the South African sunflower industry has been characterised by volatile production levels with virtually no real growth while domestic demand for oilcake and vegetable oil has increased by approximately 40%.

The imports of seed, oil and cake have gradually been increasing to meet the rising domestic demand levels. With approximately double the amount of crushing capacity available as the amount of sunflower seed that is produced locally, the question arises why the local industry can’t fill the gap of imports and increase the local level of production. Although the study took a holistic view on the sunflower value chain, this article will mainly focus on selected key drivers of sunflower seed production.

Over the years, sunflowers have received the status of an ideal crop to grow in South Africa under conditions of low-input farming and marginal cropping conditions. Sunflowers’ ability to produce relatively consistent yields under adverse weather conditions and their overall characteristic of drought-tolerance makes it an attractive crop for producers in dryland production regions.

Sunflowers can also produce a crop on marginal soils with very little or no additional fertiliser. In 1999 the sunflower area reached its peak when 828 000 hectares (Graph 1) were planted. Production is concentrated in the Free State (FS) and North West Province (NW), which together account for 79% of the national area planted to sunflower.

Since its peak in 1999, the area planted has followed a declining trend with greater reductions in the North West Province compared to the other production regions. The reasons for these reductions differed from one region to the next and included: The adoption of new bio-tech maize cultivars with better yields, practical producer constraints e.g. negative sentiments to the crop based on historic incidents such as poor emergence, Sclerotinia, falling over problems, bird damage and the possible exclusion of marginal land under crop cultivation.

However, one underlying factor stood out in all production regions for why producers are reluctant to expand the area under sunflower production, and that is that under ideal growing conditions or irrigation, sunflowers do not provide the same upward potential as crops like maize and soybeans.

As a consequence, many producers see the crop as a “catch crop” and preference is not given to the timing of production, i.e. optimal planting date and climatic conditions (soils might be too warm or there might be a lack of moisture, etc.).

It is not uncommon for producers in certain production regions to leave sunflowers as a last resort, waiting till the very last day to plant, ”the 35th of January” in producers’ terms. The adverse effects of the wrong planting dates have been trailed and propagated to producers and those who have adapted to guidelines of optimal cropping practices have achieved improved yields.

It seems as if sunflower hybrids that are currently available in the local market do have the genetic potential to produce higher yields. Furthermore, the introduction of advanced Clearfield Plus sunflower breeds offers a major benefit in the management of weeds and opens the opportunity for growing sunflowers in no-till or minimum till farming systems.

Graph 2 illustrates the gap between the average yields obtained in the ARC-GCI yield trials and the average yields obtained in the various provinces. From (2005 - 2010), the ARC average yield was 2,1 t/ha and country average was 1,2 t/ha. Naturally, yield trial data will always produce higher yields on small plots compared to actual full scale production. It does, however, illustrate the yield gap that exists between the genetic potential of the plant and the actual yields that are obtained in the field. What is more interesting to note is that these gaps seem to be proportionally larger than what is the case for maize and soybeans.

Drawing any final conclusions merely on yields is an over-simplification of a complex production system. Therefore, BFAP applied a financial simulation model (FINSIM) to generate a stochastic outlook for the gross margins of a prototype maize and sunflower farm in the North West Province (Graph 3). 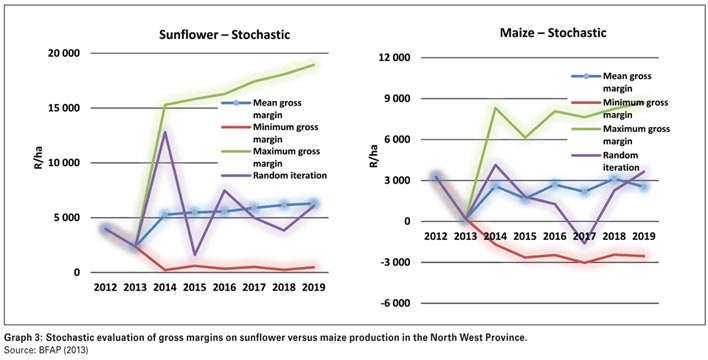 The stochastic outlook was generated by imposing the actual historic variations in yields, costs and prices of a specific farm on to the outlook that was generated by the BFAP sector level model. It has to be mentioned that this 1 200 ha crop farm in the North West Province cannot be regarded as a typical farm as actual yields that were recorded over the survey period (2010 - 2013) exceeded the average yields of the region.

This, however, stresses the point that if sunflowers are treated as a cash crop in its own right, it becomes a profitable enterprise to consider. The results indicate that the sunflowers proved to have a higher average gross margin than maize over the long run and more importantly, the potential minimum gross margin for sunflower remained positive throughout the outlook period, whereas the potential minimum gross margin for maize turned out to be significantly negative.

The sunflower seed price is derived from the cake and oil prices and since these commodities are imported, the domestic industry is facing stiff competition from imported seed, oil and cake that can be traced right back to farm level. For example, being a major exporter and therefore trading at export parity levels, the average farm gate price in Argentina (converted to rand) for the period 2010 - 2012 equalled R2 153/ton compared to the South African producers who received an average farm gate price of R3 747/ton that was derived from the import parity levels of oil and cake. Finally, it is important to note that a number of issues related to the competiveness of sunflower seed production were not discussed in this article. For example, the potential premium on sunflower seed with high oil content or the development of niche markets like the high-oleic market that has been expanding in Europe.