The effect of nitrogen application levels on sweet sorghum yield

Since 2009, the ARC-Grain Crops Institute (ARC-GCI) has been involved with a European Union project named “Sweet Sorghum – an alternative energy crop”.

As part of this project, the ARC-GCI endeavoured research to determine the nitrogen application rates needed for optimum sweet sorghum production. Nitrogen has an effect on the sugar content of the syrup and the sugars are the components which will be fermented into bio-ethanol.

Up to this point in time, no such research had been done in South Africa because the initial concept was that the amount of syrup is important and not the sugar content of the syrup. However, a number of trials were executed to investigate genotypes regarding drought and temperature tolerance.

The nitrogen application trial started two years ago and some very interesting facts came to light. Results in the first year proved to be different from the common perception that the highest nitrogen levels will produce the best results.

The 2012/2013 year appeared more true to the norm. The 2013/2014 year will be the last year during which this interaction will be investigated. It is foreseen that once the trials have been finalised, results obtained will aid the industry by supplying answers into what application rates should be used for optimum sweet sorghum production to serve as an alternative bio-ethanol source.

Results from the first year were inconsistent, indicating that the best yields were produced from a 60 kg/ha nitrogen application rate. Some genotypes even produced better at 30 kg/ha. During the 2011/2012 season, the S120 genotype did the best regarding biomass production at an application rate of 60 kg/ha.

Biomass is an important characteristic because a high biomass yield yields more syrup. Genotype S27 contained the highest sugar levels (Brix percentage) in the syrup and S120 yielded the most syrup.

An important quality factor is the sugar content of the syrup, because the sugars (total soluble solids) are fermented into ethanol. This ethanol can be used as a blending substance with fossil fuel to produce biofuel. The main requirement for first generation bio-ethanol production is a Brix of 16% and above.

This value is critical to the correct fermentation processes and the amount of bio-ethanol to be produced. Results showed Brix levels of 26,79%. The higher the syrup yield with the correct Brix, the higher the economical viability and sustainable value of sweet sorghum as an alternative energy source. 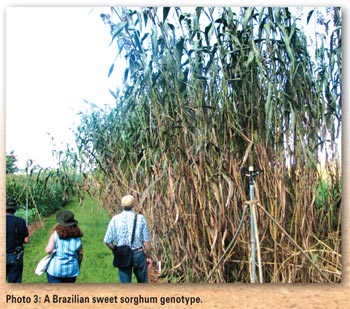 The genotypes which were entered into the nitrogen application rate trial are not the only sweet sorghum genotypes to be considered for bio-ethanol production. Photo 3 for example shows a Brazilian genotype which was bred for biomass yield and second generation biofuel production, but was also tested for syrup yield.

The genotypes entered into the ARC’s trial were randomly selected from 22 local genotypes to study the effect of nitrogen levels on the behaviour of sweet sorghum. Data from other cultivar trials indicated that ten sweet sorghum genotypes can comply with the requirements (syrup yield and Brix percentage) for bio-ethanol production.

The nitrogen application trial showed promise and can be successfully incorporated into a bio-ethanol programme. Due to the variance of the data collected from the two previous seasons, a third season’s data will be necessary to supply more significant answers. The results can then be applied to assist producers in South Africa who want to become involved in the bio-ethanol production industry.