As the planting window for small grains is upon us, it is important to reflect on problems from previous production seasons/years. Herbicide resistance is still a worrisome fact in especially the small grain production areas of the Western Cape.

Many grass weeds may now be able to survive herbicide applications, which would have been able to control them in previous seasons. In the past, the biggest concern was ryegrass (Lolium spp.), but more and more weeds are reported as being troublesome to control.

The procurement and application of herbicides are still the biggest input cost in a small grain producing system, especially in no-till/conservation tillage systems, where herbicides are largely depended upon.

Due to the limited availability of herbicides from a vast array of different chemical groups, repeated chemical use in following seasons occurs way too often. Moreover, two or three applications of different herbicides at various dosages are often applied in an attempt to eradicate resistant weeds.

In the end, this leads to resistance to herbicides from several different mode of action groups in one population, resulting in limiting future chemical control options.

ARC-SGI can screen for target-site resistance

Researchers from Australia and France have developed mutation markers that can be used to identify target-site mutations in weed species. These markers are then used to genotype specific resistant biotypes for specific mutations.

Since 2013, the ARC-Small Grains Institute  (ARC-SGI) has been working on the optimisation of these markers for South Africa.  Through the screening of multiple samples, three very distinct mutations have been identified in South African ryegrass populations occurring in small grain producing areas. These markers are the ALS mutation markers 197 and 205, which confer resistance to all group B herbicides (Su’s, Triazolopyrimidines and Imidazolinones) and ACCase mutation 2078, which confers resistance to many Aryloxyphenoxy-propionates,  all Cyclohexanediones (including clethodim) and Phenylpyrazolines.

This means that all grass weed samples that are received, get screened for these three mutations first, but if none of the mutations are present in the sample, the sample is screened with all other mutation markers. This is done to make sure that no mutation is missed in the screening process.

Mutation markers can also distinguish between plants that are heterozygous (Aa) (one copy – resistant allele) or homozygous (AA) (two copies – resistant allele) resistant for each specific target-site mutation. Depending on which mutation is detected, the heterozygous or homozygous state of resistance can exponentially increase the needed dosage of herbicide to achieve 50% mortality. What is also important to remember is that resistant biotypes, on average, require ten to 30 times higher herbicide dosages than susceptible types.

With planting season approaching fast,  producers are asked to courier grass weed samples to ARC-SGI to be screened for target-site resistance. This service is currently free, but from later in 2016 screening fees will be charged. Results will reach the producer within approximately a week, so that the necessary herbicide choices can be made.

Resistance: Which herbicides can the grass weeds be screened for?

How to get your grass weeds tested for resistance? 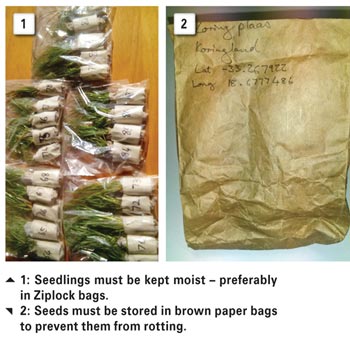 Producers are urged to make use of this service, as it will allow them to make informed choices of the herbicides needed for the spraying season. Also, remember that resistance is able to spread from one farm to another, meaning that although you did not have resistance last year, it does not guarantee no resistance this year.

By being able to make the right herbicide choices, producers will be saving a vast amount of time and money in the end.

For further information regarding this topic or how to sample your weeds, please contact Hestia Nienaber at 058 307 3420 or deweth@arc.agric.za or Scott Sydenham at sydenhams@arc.agric.za.