I must admit to being somewhat sceptical when I saw the name of the Minister of Agriculture, Forestry and Fisheries, Mr Senzeni Zokwana, in the Congress programme and silently wondered if he would be sending a representative in his place, as in years past.

But, not only did minister Zokwana personally deliver his speech, he also spent a day in our midst braving the tensions in a way that earned him respect and gave us reason to hope that we have a leader who will listen to us. 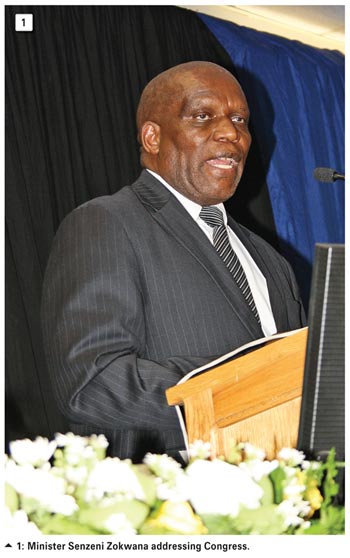 The minister empathised with producers facing the debilitating drought: “The grain industry is hurting and I insisted to be here at your Congress with you to share your pain.”

His ministry is concerned about the sustainability of producers and he is aware that we need to establish new markets as demonstrated when he signed the trade deal with China in December.

Grain SA recognised this contribution by awarding a certificate for their support, assistance and promotion in creating export opportunities for the South African grain and oilseed industry.

The minister confirmed that government is aware of the threat of food insecurity and consequently eager to support producers to improve production capacity. He said that government needs to guarantee producers a chance to compete globally.

Another issue is the need to look at the rising cost of inputs, like fertiliser prices. He expressed concern that the drought will seriously impact producers’ ability to produce next season and the proportion of the disaster will reach far beyond the farming community. He is of the opinion that government needs to look at provincial governments’ declaring disaster areas so that producers can plant next year. He undertook to ensure sustainable production.

Minister Zokwana did not shy away from the “hot issues” and his message was: We need to talk to each other. Producers must come up with counter proposals. The value of constructive dialogue emerged as a strong theme and he asserted by saying: “We need your help; we need to listen and understand other’s views so we can take better decisions”.

The land ceiling issue must be debated and he’d be engaging the Minister of Rural Development and Land Reform to ask how much scientific research has been done on the 12 000 ha figure. On the 50/50 farm worker partnerships, he advised producers to be proactive in seeking solutions. It is not government’s intention to stop producers from producing; but the reality is that we need to ensure that more people have access to land.

The development of black farmers or new era farmers is not intended to replace existing white producers, but rather an effort to create a bigger family of producers. He asked white commercial producers to work together as “teachers of those who have been less privileged”.

Minister Zokwana assured us that he is aware of the seriousness of the lack of access to finance for new era farmers and said that a breakthrough is close as partnerships are developed between the National Agricultural Marketing Council (NAMC), the Jobs Fund and his department.

He acknowledged the role Grain SA is playing through its Farmer Development programme saying they have set a benchmark through the valuable training and mentorship which has been delivered. This conviction prompted him to make a call on the Grain Trusts to continue with their partnerships with Grain SA to have sustainable production during this time of transition as this cooperation is already delivering excellent results.

He recognised that government not only needs to give producers confidence to continue producing by creating a policy environment which is conducive to food production; it also needs to address issues which will guarantee that producers have a chance to compete
globally.

Zokwana confirmed that 50% of our wheat consumption is imported and that this needs to be addressed so that local capacity for production and consequently job creation is improved. This crisis in the wheat industry was addressed further later in Congress.

Mr Richard Krige, from the southern Cape, proposed that even if wheat was produced at no profit, there would still be positive spin-offs amounting to R5 billion plus into the local economy rather than us helping other countries’ economies to thrive!

The minister said that government is concerned about farm security. “The state wants to protect you. These people are criminals who will kill anyone.”

He called upon producers not to be discouraged, saying he is hopeful we can progress to a place where we forget about the language we speak and the colour of our skins and look at ourselves as producers. “I’d like to see your kids falling in love with farming and we can only do this if farming is made fashionable by those who make legislation and those who farm.”

I’m not ashamed to say that there were a few wet eyes among those listening to his closing words: “Ek wil luister, ek wil saam met julle wees, ek wil verstaan. Your fears are our fears; your troubles are our troubles – and together we can make a better South Africa!”

Continuing the theme of sustainable production, a producer from Indiana (USA), Mr Kip Tom, shared his vision of the role data science will play:

Clearly we need a revolution in the way we do agriculture. This will be achieved through biotechnology; informatics – remote monitors and sensor controls in our equipment; and now “cognitive computing” – the ability to use information from the past to make changes in the future.

Technology is becoming more affordable and easier to use to measure, monitor and control. Satellites or drones will be flown over a field and within hours we’ll have the know-how to remedy a problem. We must embrace those tools – adapt or die – as we can’t do things the same way as in the past. We need to cultivate the passion to do what is right for the future.

Mr Roelf Meyer chairs In Transformation Initiative promoting the concept of dialogue towards finding solutions for conflict situations. They are currently promoting dialogue in South Africa in the context of the National Development Plan (NDP), food security and land reform.

They have held three imbizos along with the secretary general of the ANC, where the focus is on bringing different views closer to each other, accepting different mind sets, addressing issues and trying to discover commonalities. The goal is to establish a “War Room” where government, the private sector and the farming community can debate issues.

Mr John Gibbs, a KwaZulu-Natal dairy producer, has been contracted to look at models where the NDP can be practically applied. He believes that significant progress is being made in closing the gap between viewpoints.

This happens where the focus is on what drives investment in agriculture in South Africa – issues which affect all producers:

Any imbalance in these three key issues creates risk. We have to get involved in narrowing “the strategic gap” between producers and policy makers. During the panel discussion, Meyer emphasised that the producers they meet at the imbizos are not narrow minded and are constructively looking for solutions.

Dr Marinda Visser, manager: Industry Services, Grain SA, emphasised that: “For research and development to be successful, we need cooperation, especially from government.

“We need to adapt or die. Our plan is to make sure we have the best molecular biotechnology markers and techniques available to us to make sure that we can overcome the problems we are facing.”

The Q & A session delivered burning issues, but panel chair, Mr Max du Preez (writer, journalist and analyst), advised listeners: “We must learn to sift through the rhetoric, calm down and listen to the special things the minister has said today.

“We have seen other countries in Africa where emotions led people into grabbing land without plans. We would rather see a land reform process linked to increased production, it creates certainty and it retains jobs. You cannot address the ills of the past by saying the current generation has to pay. What we need now is to be rational enough to say change has to happen; but in a way that is sound and by which food security is guaranteed.

“Producers must beware of sensationalists. A person who says we will grab land without compensation does not belong to the parliament I’m in.

“Misconceptions must be dealt with. If any producer believes he is regarded in a bad light, it is not what the organisation I am in believes in.

“There has never been a meeting I’ve been in; nor do I know of any belief within the ANC that white commercial producers are not needed now or in the future.”