In 2014, South Africa exported 2,1 million tons of maize which translated to R6,5 billion in export revenue (ITC, 2015). However, South Africa will not achieve comparable export revenues in the 2014/2015 production year due to unfavourable weather conditions.

South Africa will for the first time in seven years be a net importer of maize. Grain SA estimates this season’s imports at 770 000 tons, compared to 83 073 tons the previous season. The high level if imports in the current marketing year will cost an estimated ± R2,2 billion.

At the time of writing, 62% of the 770 000 ton requirement had already been imported. In this article, we briefly explore Grain SA’s scenarios for the 2016/2017 marketing year. Namibia, Mozambique, Lesotho, Swaziland and Italy were also amongst the top ten export markets with shares ranging between 3% and 6% of South Africa’s total export revenue.

Graph 1 illustrates South Africa’s maize export earnings over the past ten years. The highest export earnings were recorded in 2013, at R7,3 billion, on the back of exports which were at 2,6 million tons (ITC, 2015).

The 2015/2016 drought is said to be the worst since 1992 and shifted the domestic maize market into a net import situation. Grain SA estimates that white maize imports might reach 70 000 tons, while yellow maize imports might reach 700 000 tons. At the same time, South Africa’s exports to regional markets within the Southern African Customs Union (SACU) are expected to reach 630 000 tons this season.

The continuing heatwave and drought have become a major cause for concern throughout the country. The worrying weather conditions have led to reluctance by producers to plant maize and the total area for planting maize is expected to decrease by 4% year-on-year to 2,55 million hectares.

Against this background, Grain SA has quantified three possible scenarios for the 2016/2017 marketing year and these are presented on Table 1, Table 2 and Table 3. It is important to emphasise that all scenarios are based on the intended planting area of 2,55 million hectares, which might change as the season unfolds and new data and insights come into the market. 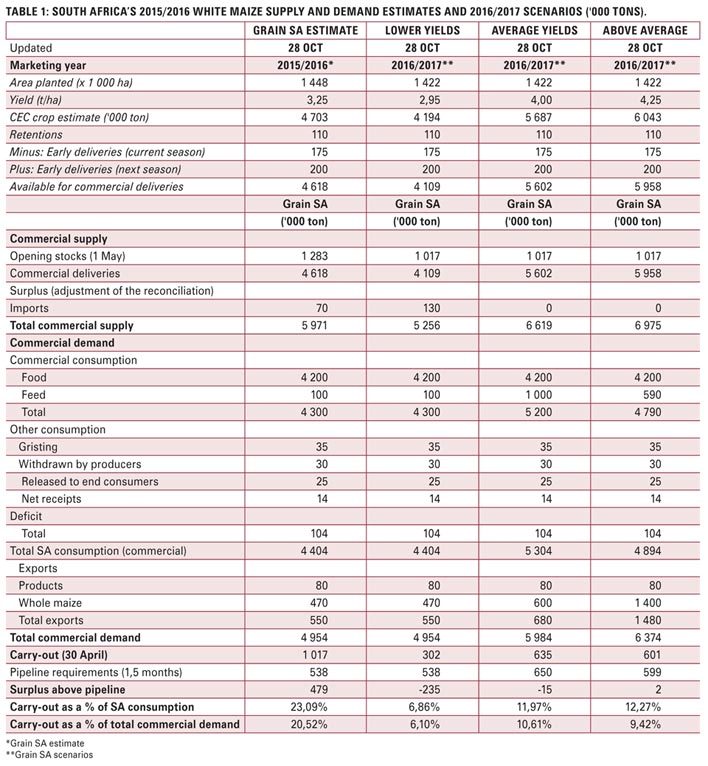 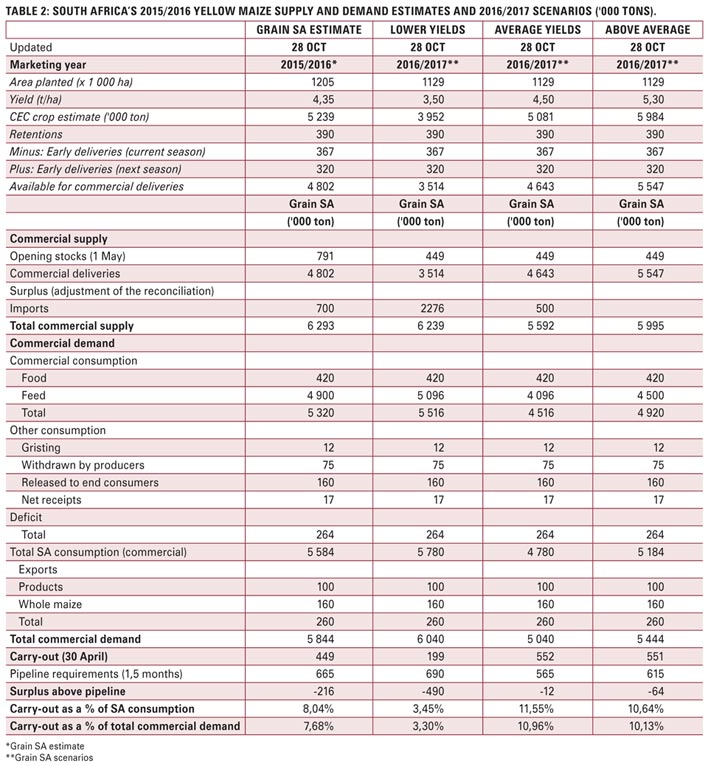 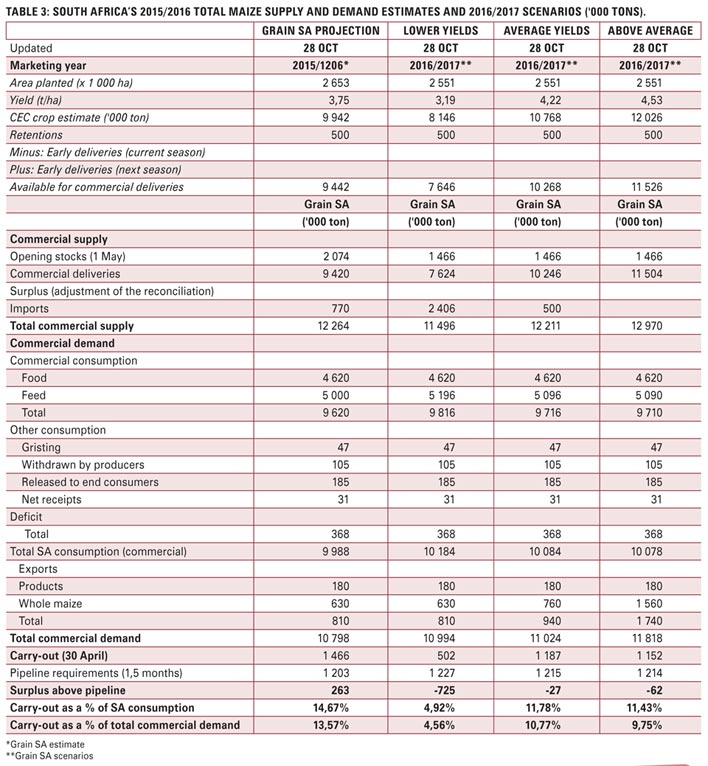 White maize
In the event of below normal rainfall, South African producers might achieve a national average yield of 2,95 t/ha. The National Crop Estimates Committee’s (CEC) intentions-to-plant data shows that producers might plant 1,42 million hectares of white maize. This would then lead to a total production of 4,19 million tons. Assuming that domestic consumption remains constant due to higher prices and exports would only be for Botswana, Namibia, Lesotho and Swaziland (BNLS countries), South Africa would have to import 130 000 tons of white maize to meet the domestic demand (Table 1).

Yellow maize
In the event of below normal rainfall, South African producers might achieve a national average yield of 3,50 t/ha. The CEC’s intentions-to- plant show that producers might plant 1,12 million hectares to yellow maize. This would then lead to total production of 3,9 million tons. Assuming that domestic consumption would slightly increase on the back of an increase in the livestock industry and exports will just be for the BNLS countries, South Africa would have to import 2,27 million tons of yellow maize to meet the domestic demand (see Table 2).

Total maize imports
Total maize imports of 2,4 million tons would cost the South African economy ± R8 billion. This would have a negative effect on the economy, resulting in a widening current account deficit and possible influence the exchange rate movements. South Africa’s economy needs capital inflows to finance the current account deficit, thus any significant outflows would be negative for the economy.

White maize
In the event of normal rainfall, South Africa might achieve a national average yield of 4 t/ha. The CEC’s intentions-to-plant show that producers might plant 1,42 million hectares to white maize.

This would then lead to a total production of 5,68 million tons. Exports would mainly be for the BNLS countries at a volume of 600 000 tons. There wouldn’t be a need for imports (see Table 1).

Yellow maize
In the event of normal rainfall, South Africa might achieve a national average yield of 4,5 tons per hectare. The CEC’s intentions-to-plant show that producers might plant 1,12 million hectares to yellow maize.

This would then lead to total production of 5,08 million tons. The exports would just be for the BNLS countries and South Africa would still need to import about 500 000 tons to satisfy the domestic market requirements (see Table 2).

In the event that South Africa receives sufficient rainfall at an appropriate time in an intended area of 1,42 million hectares for white maize and 1,12 million hectares for yellow maize, South Africa would return to a net exporter status and total maize exports would possibly reach 1,7 million tons. This scenario would also lead to lower maize prices for producers, especially white maize. Yellow maize prices would to some extent benefit from global export demand (see Table 3).

Possible scenarios for the 2016/2017 marketing year should be viewed with caution as they might change in line with weather changes and revision in the CEC’s area planted estimates. The scenarios were mainly presented for information purposes to assist producers and other industry stakeholders to plan ahead, should conditions favour any of the above mentioned scenarios.

The updates of these scenarios will be available on Grain SA’s website at www.grainsa.co.za.