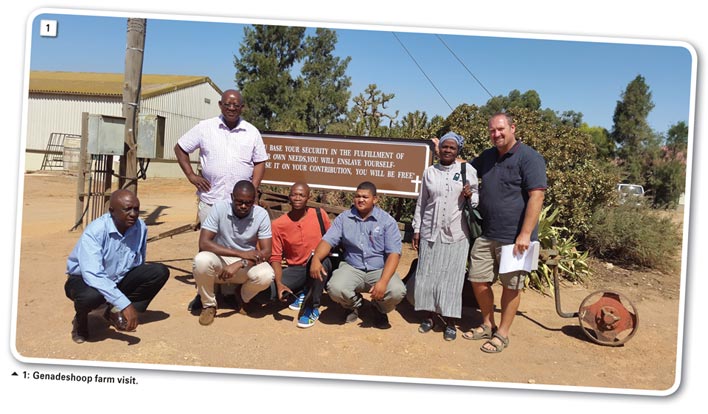 The Bakwena ba Mohlabetse Commercial Properties Association, from Groblersdal in the Limpopo Province, is one of many farming communities that have benefitted from the South African government’s land restitution programme.

The group recently received 3 000 ha of land with an outstanding 6 000 ha still to be settled from their original claim of 9 000 ha. As new entrants into the large-scale commercial farming sector, such farmers generally face a number of challenges including: Lack of farming skills and experience, limited access to operational funding, and limited or no infrastructure.

Another great challenge that has to be faced by these land claims farms is the social dynamics of communal resource management. Me Liana Stroebel, a grain producer development co-ordinator (Grain SA), facilitated cross-over visits during March this year. As part of the technical support provided to different farming communities, the ARC-Smalholder Agricultural Development Division and its partners endeavour to identify, investigate and upscale new tech nologies and best practices in the agricultural sector.

The wheat fields on our way to Windheuwel farm were waiting for winter rains, as the five representatives of the Bakwena ba Mohlabetse Commercial Properties Association study group were transported by the ARC’s team to visit the Genadeshoop farm, near Piketberg in the Western Cape.

The purpose of the visit was to learn and get advice from the farmers and their mentor on lessons learnt as they walked this road of turning an emerging farmer into a profitable commercial producer that contributes to the food security of the country.

The commercial producer, Mr Stephanus Richter, gave 100 ha of his most arable land and 100 sheep and asked the local community who will be willing to use it, and those who showed interest, including Mr Whernit Dirks, stepped up and made a success of it and soon after registered the Genadeshoop CC.

Richter was again inspired to give them another 300 ha of his most arable land and later even assisted them in renting their neighbouring farm of another 300 ha. Richter and Genadeshoop then registered a Trust that holds all the immovable and movable assets and deals with all the contracting wages.

With good recordkeeping, disciplined budget adherence and a viable business plan, the Genadeshoop group was able to qualify for an insecure loan from Absa, under the mentorship of Richter. It became apparent to the group that the profits of the arable land was enough to pay for the rental of the neighbouring farm, the lesson being: Soil conditions determine yield and in an industry where the profit margins are very small, investing in conserving good soil conditions does pay-off.

Genadeshoop farmers then applied for funding and received R2,5 million over five years, half of which went into input costs and the other half into immovable assets. Dirks shared this: “Genadeshoop’s success is from not waiting for or relying on grants from the government. If the grants do indeed come, it is used only to boost the existing capital.”

The journey to profitability for Genadeshoop was long and their mentor Richter continued to assist them by renting his own machinery to them at a reasonable price and providing employment to Genadeshoop farmers, as all their profits went back into the business to buy machinery.

A neighbouring farm of 450 ha went up for auction, and Richter continued to assist Genadeshoop by putting down 15% of the farm’s value as a deposit. However, another R1,5 million was required to stock and make the new farm operational. According to Richter, “South African producers have to compete with international producers that are highly mechanised, subsidised and who practice precision farming, so locally the battle is won in the con tracting business. It must however be said that it is only through the grace of the Lord that this project is surviving and doing so well.”

The relationship between the Genadeshoop community and their mentor is one of love, trust and commitment. The main advice the Bakwena ba Mohlabetse farmers received from the Genadeshoop farmers was: 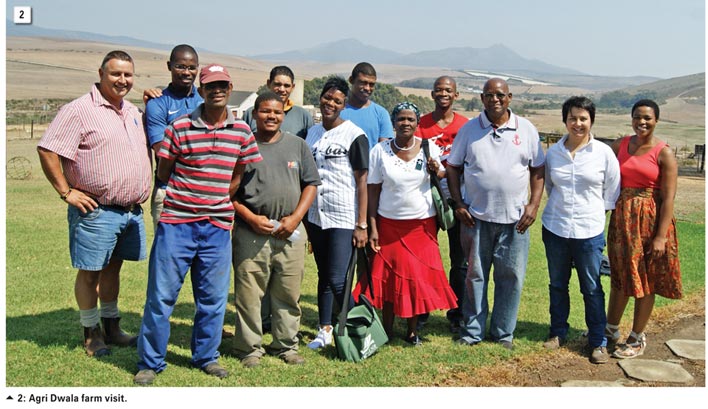 The representative farmers of the Bakwena ba Mohlabetse group and the ARC’s group as well as Stroebel travelled to Agri Dwala farm outside Napier, near Caledon in the Western Cape. Here the group met Mr Kosie van Zyl, the mentor of Agri Dwala.

Van Zyl approached the local previously disadvantaged community in the area; more specifically those families that were already farming on a household scale. He proposed that they register a company under which the land they obtain and future assets may be registered.

Agri Dwala (Pty) Ltd was registered and was awarded a tender in 2006 for renting some of the municipal land of Napier, amounting to 643 ha of arable land, for a period of five years with an option to rent for the subsequent five years.

Van Zyl approached the local co-operative, Overberg Agri, for a production loan and secured the loan with reasonable terms that included a session on the harvest. In 2010, Agri Dwala Properties (Pty) Ltd received a 50/50 grant and a long-term loan from Pioneer Foods to buy the farm Karsrivier of 316 ha, on which they farm with grain and livestock.

Agri Dwala, Van Zyl and Mr Piet Blom then registered and started an operations company with a shareholding of 70%; 15% and 15% respectively. Van Zyl explains: “The operations company carries all the risk, and gives the mentors a sense of ownership which fosters commitment in the mentorship relationship.”

The operating company rents the Agri Dwala land as well as all other land on which the group farms. Eight of the beneficiaries received loans of between R12 000 to R25 000 per person from Land Bank which they used to buy cattle – most of these loans have been paid back in full and the rest are up to date with instalments.

Furthermore, the LRAD programme provided the opportunity for Agri Dwala to buy the farm Jafters Krantz of 268 ha, on which they also farm with grain and livestock.

Of the 29 Agri Dwala beneficiaries, four work as permanent staff on the farms and the rest have the preferred option of part-time work on the farm – a minimum of five hours a week and wages are paid at the end of each month, whilst all of the 29 beneficiaries of the Agri Dwala group get dividends.

The women in the Agri Dwala group run a guest house and a wedding venue on the farm for an extra income and they plan to expand their enterprise in the most creative ways.

If a beneficiary wants to leave, they sign an agreement that confirms it is by their own accord and in good faith and the trust pays them their current shareholding in cash.

The main advice the Bakwena ba Mohlabetse farmers received from the Agri Dwala farmers was: