Some time ago, the positive energy in the South African sorghum industry was palpable, driven by the prospect of national biofuel production. However, over the past two years, this positive energy seems to have subsided with no clear direction about the future of this national project.

There were hopes that biofuel production would present market opportunities and, in turn, promote sorghum production across many parts of the country. Since none of these plans have materialised thus far, there has been a renewed interest among sorghum producers to explore export markets.

South Africa is currently one of the smallest players in the global sorghum export market, contributing a mere 1,4% of total world sorghum exports. Global sorghum exports are concentrated within the top six largest exporters (which are the United States [US], Argentina, Australia, Ukraine, France and India) who account for 94% of the total global exports.

On average, South Africa exports 26 000 tons of sorghum per annum, of which about 98% is normally exported to Botswana. Nonetheless,  Sihlobo and Kapuya (2015) indicated that there is potential for South Africa to increase sorghum exports to other key sorghum consuming countries in the Far East such as Japan, Europe and possible African markets, such as Sudan and Ethiopia (see the full article here: https://www.grainsa.co.za/grain-market-overview-3).

This year, South Africa is once again confronted by drought and it is expected to be a net importer of sorghum. This has further deflated the prospects for the growth of domestic sorghum production. Our focus in this article is therefore on the current key market fundamentals driving the global and domestic sorghum markets.

The 2015/2016 global sorghum production is forecasted at 68 million tons, a 10% year-on-year increase and the highest production level in 19 years. This increase is mainly due to increased production in the US, Argentina, Australia, Mexico and India (Graph 1).

At the same time, the 2015/2016 global sorghum ending-stocks are estimated at 4,8 million tons, an increase of 20% year-on-year and the highest volume in ten years. The major driver behind this increase has been a build-up in the US sorghum stocks to a 23 year peak of 1,9 million tons (Graph 1).

At the same time, Grain SA forecasts a 13% year-on-year decrease in domestic consumption to 167 100 tons, due largely to higher prices, trading at levels of R3 650/ton, higher significantly by 51% year-on year (Table 1).

It is important to emphasise that the aforementioned estimates are supported by those of the National Crop Estimates Committee, and should any changes occur in their ensuing forecasts, Grain SA will make the necessary amendments in the supply and demand estimates.

Higher global supplies are likely to keep international sorghum prices under pressure in the short to medium term while in the domestic front the opposite is likely to persist. This season has been clouded by drought. However, it is important that the sorghum industry continues to work on creating export markets as that could lead to long term benefits in the coming seasons. 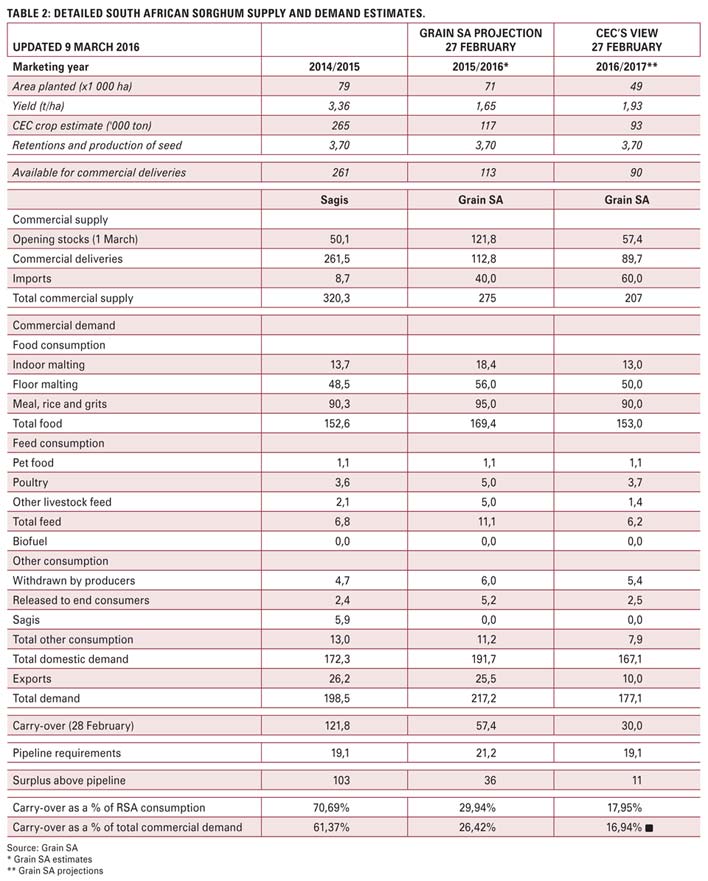