Soybean rust - managing the risk of resistance to triazole fungicides

In the absence of resistant cultivars, the South African soybean industry is totally vulnerable to Asian soybean rust, caused by the fungus Phakopsora pachyrhizi.

Asian soybean rust is very dependent on fungicides to protect the crop. Initially, crop losses were managed in South Africa through emergency fungicide registrations followed by an intensive research programme.

Because of their high level of efficacy, the triazoles have been used widely to control Asian soybean rust. At present, no resistance by P. pachyrhizi to triazole fungicides has been detected in South Africa.

However, if producers continue to use triazoles without alternating with other registered fungicides with different modes of action, then this aggressive pathogen is very likely to develop resistance to triazoles. The challenge therefore facing South African soybean producers is to use these fungicides to best effect without running the risk of losing them to resistance.

To slow down resistance development and to extend the life of a fungicide, it is advisable to follow the recommendations of the Fungicide Resistance Action Committee (FRAC), specifically:

The use of, for example, a strobilurin-triazole mixture, is the major strategy, promoted by the agricultural industry, for reducing risk of resistance towards both fungicide groups. These two active ingredients are complimentary in their action because strobilurins inhibit fungal respiration and consequently inhibit spore germination, whereas triazoles inhibit germ tube elongation, fungal penetration and mycelial growth.

However, the choice of dual product fungicides with activity against rusts is limited in South Africa. Unfortunately, carbendazim is not effective against rust, so the mixing of triazoles with carbendazim does not protect against resistance development of rusts, the way it does against grey leaf spot of maize (Cercospora zeae-maydis).

It is therefore crucial that all members of the soybean community recognise the vulnerability of the family of fungicides and that soybean producers commit to the FRAC recommendations to manage resistance development, by mixing fungicide groups, alternating groups, only spraying triazoles twice a season and using full recommended doses. 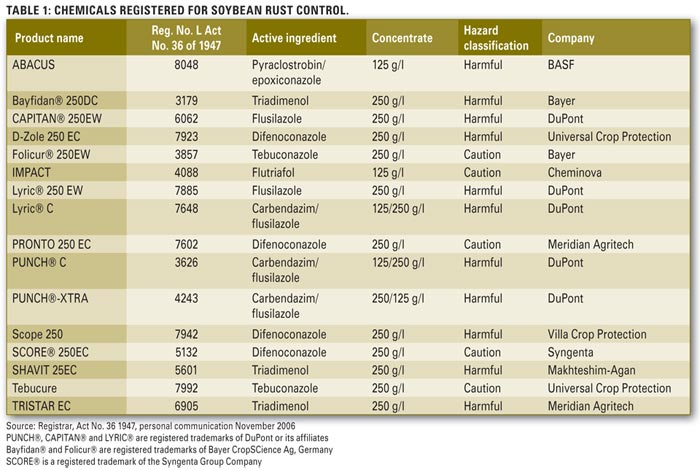