Soilborne diseases of soybean and management strategies to control these diseases

Soybeans are grown in most parts of the world and are a primary source of vegetable oil and protein. They are also grown in South Africa and are an important oilseed crop where approximately one million tons were produced on 687 300 ha during the 2014/2015 growing season.

Soilborne diseases, though, are an economically important constraint in soybean production and among the most widely distributed diseases of soybean. Under field conditions favourable for disease development, yield losses can be significant.

Surveys
In South Africa, in order to investigate the causal agents of soilborne diseases of soybean, we conducted surveys in cultivar trials and producers’ fields for three years (2010/2011 – 2012/2013 soybean growing seasons).

These localities represent three climatic areas, i.e. cool, moderate and warm. Plant and soil samples were collected thrice from each cultivar trial or farm: Two weeks after planting, at the flowering and at the pod filling stages of soybean plants.

Most important pathogens
In order to determine the importance of soilborne diseases, bioassays were conducted under glasshouse conditions. In the glasshouse bioassays, the soil collected from each area was split into two and one part was pasteurised in order to eliminate soilborne fungal pathogens (the biological component of the soil) in the soil while the second part was left untreated. 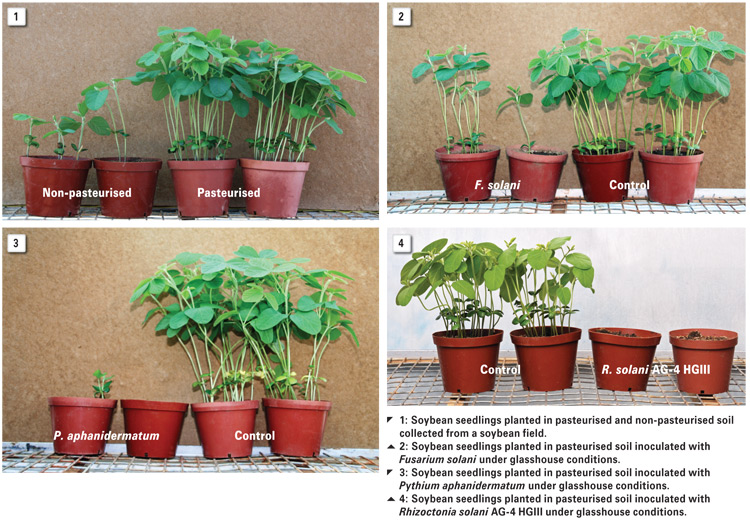 Isolations were made from diseased soybean plants that were collected from all the areas sampled. It was found that 71 fungal species were obtained from soybean crowns, hypocotyls, cotyledons and roots. 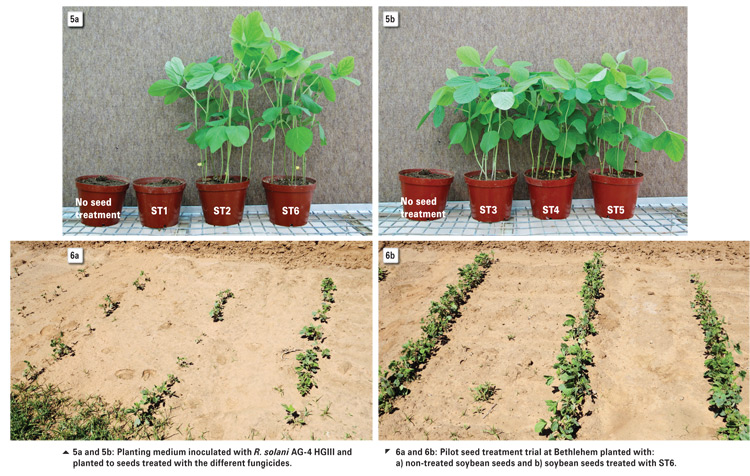 In a pilot trial one fungicide (ST6) was used as seed treatment and treated seeds were planted in three areas (Bethlehem, Brits and Groblersdal).

Conclusion
In other countries, it is clear that integrated management strategies that at least include seed treatment, resistance/tolerance and proper crop rotation are essential to sustainably manage soilborne diseases of soybean.

Although management strategies have been tested in other countries, they have not been properly tested and applied in South Africa. Among the fungicides evaluated, potential fungicides suitable and effective as seed treatment on soybeans were identified.

The ideal practice in combating the soilborne diseases of soybean is to combine the best of the three strategies. This will ensure the sustainability of the management practice with considerably lower input cost.

Acknowledgements
We thank the Protein Research Foundation and Agricultural Research Council (ARC) for supporting this research. Special thanks to Annelie de Beer for providing soybean seeds and planting the pilot field trials and Alta Schoeman and Thabo Phasoana for technical assistance.