Soil tests come in handy for next crop’s fertilising plan

Sunflower and soybean lands have been harvested in parts of the eastern Free State production area. Sunflowers and soybeans on large lands yielded 2 t/ha And 2,1 t/ha respectively.

The maize planted later than normal is showing a moisture content in the cobs of 18,5% at the time of writing. Test harvesting loads show a slightly higher yield than the preliminary crop estimates of 6,4 t/ha done at about 25% seed moisture content.

These yields on the three crops mentioned above are considerably higher than the long-term averages of 4,5 t/ha to 5 t/ha or less of dryland maize yields realised, in recent production seasons, that have been considered being at the top potential of these soil types which are medium to deep Westleigh forms. Higher yielding cultivars for all crops have steadily increased the norms depending on cultivation practices, soil moisture at planting and subsequently the rainfall patterns.

The above yields were realised with a semi-till system keeping previous crop plant residues on the surface, ripping soils in late winter and grazing of some residues before the ripping operation. Weed control was well done with an effective chemical control spraying programme at and after plant emergence. 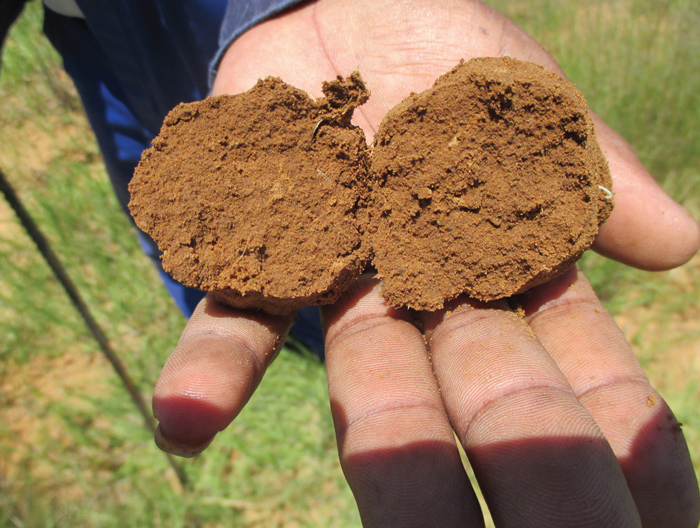 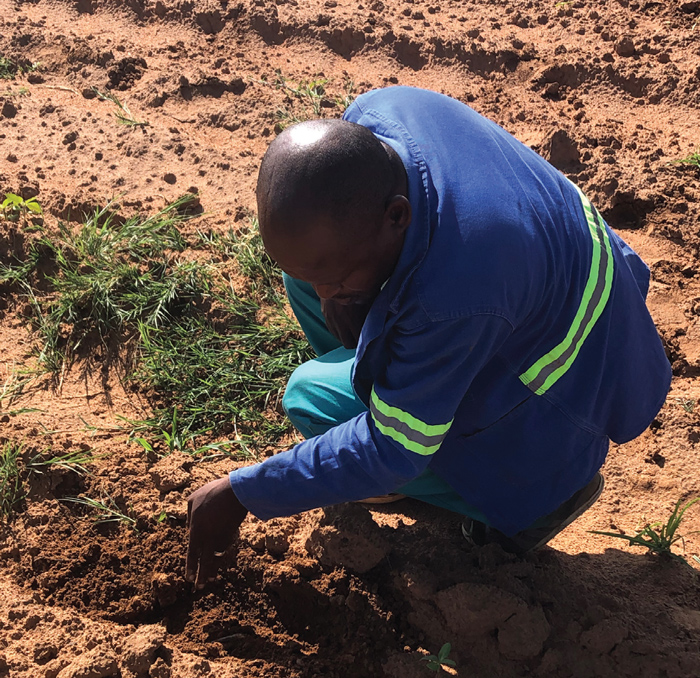 Always keep your feet in the lands and your hands in the soil.

It is good farming practice to take soil tests at least every three seasons to have an idea of the possible changes to your fertility levels. It would also be ideal to do soil tests between July and October this year after a bumper crop has been harvested. The yields realised can be compared to previous soil tests, actual fertilization and targeted yields to determine the coming seasons fertiliser programme.

Do I compensate for an above average yield, new cultivar potential or do I fertilise as normal using the quantity targeted for certain assumptions? The crop rotation system followed, for example, using a combination of soybeans, maize and sunflowers will also influence your decision on the appropriate fertiliser type and quantity to use.

PREVIOUS SOIL TESTS
Please see Table 1 as an example of the results of a soil test shown in colour coded blocks so that the comparison of your soil can be visually compared to an ideal or norm that is ideal. As can be realized there is much data for an inexperienced farmer to look at to be able to recommend a suggested fertilisation programme. 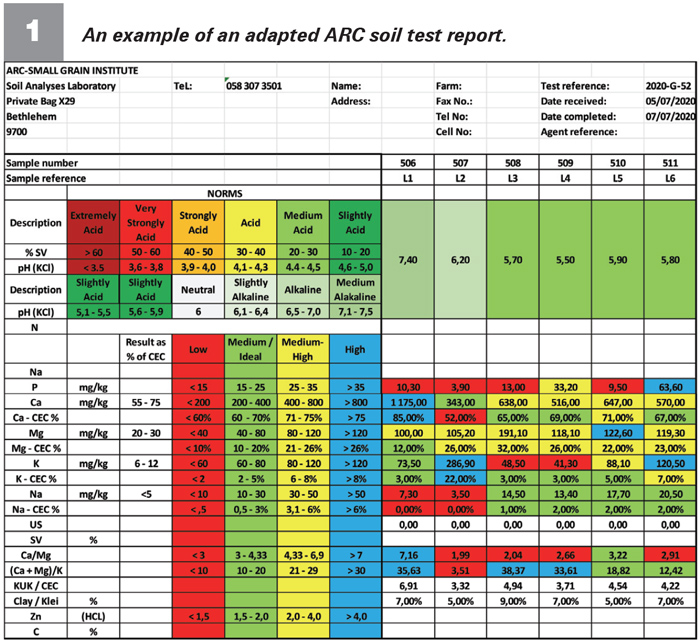 Each soil test laboratory will have a different reporting format depending on the test requested by the farmer, consultant or fertilizer agent. It is advisable to use one laboratory over many years so that the soil tests, fertiliser recommendations and yield results can be consistently and reliably compared to make the right decisions. It is always advisable to use experienced agents who can consult their agronomist for absolute clarity on why a certain regime is recommended.

If you have limed some lands or part or a farm it will be essential to see how the pH and thus availability of the various soil nutrients has improved, and the fertiliser programme adjusted accordingly. The pH in the samples given can be seen to be almost ideal for crop production resulting from a long-term liming programme. Liming should only be carried out after the financial cost implications are considered as the benefits will occur only over three seasons. If working capital is constrained, then rather use the recommended programme as usual. Correct liming on high potential soils can really increase yields by a few tons per hectare.

Table 1 should encourage you to ask your agent or agronomist about any factors that you should be addressing so that you can improve your own soil fertility and yield potential.

It is recommended that soil samples should be taken during July and August so that the laboratory can complete your tests before the huge rush later.

FERTILISER RECOMMENDATIONS
In answer to the question asked in the introduction it seems that the consensus amongst fertiliser agents and consultants is that if you have for example achieved a 6 t/ha average maize crop, to fertilise for this target again. If there is another good rainfall year you can then achieve a similar yield in the current year.

Please look at Table 2 for the various nutrients required to produce various yield targets per hectare. 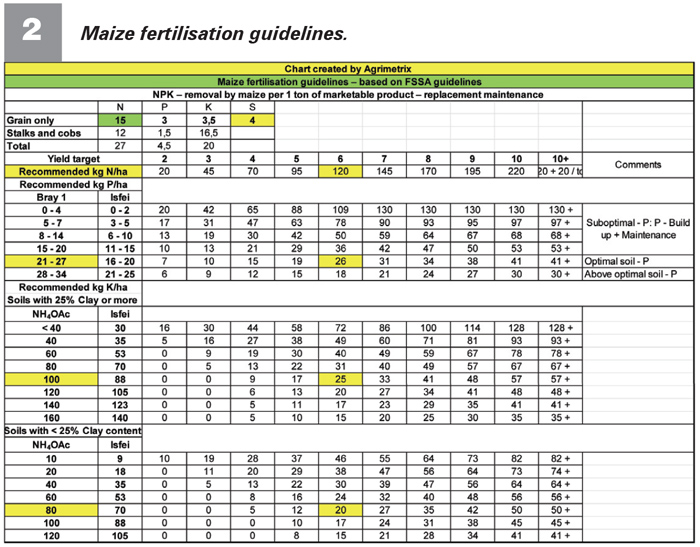 It is important to know what method your laboratory used to measure the various components and other aspects of your soil. The recommendation is based on replacing the nutrients that will be taken out of the soil and removed by the seed harvested. Look at the section showing removal of nutrients by seed only or seed and stalks and cobs. If you are going to make silage or bale all the plant residues, then the fertilisation should be adjusted upwards so that the soil is not over mined. This will be evident in subsequent crops if a deficiency of any nutrient occurs. The numbers shown indicate the kilograms of nutrient removed per ton of maize seed yielded.

Table 2 would be based in broad terms on a Bray 1 method soil test showing 26 parts per million (ppm) for phosphate (P), 80 ppm for potassium (K), and less than 25% clay content. Yield target is 6 t/ha for dryland maize.

The fertiliser regime for a target of 6 tons would require a minimum of 120 kg of nitrogen (N), 26 kg of phosphate (P), and 20 kg of potassium (K) per hectare. It would not be recommended to plant more than 50 kg of nitrogen at planting to avoid seedling burn and damage. The maize crop could be planted with a fertiliser mixture having 50 kg N, 26 kg P and 20 kg K per hectare. Usually it would contain zinc as a rule and other trace elements if recommended. The 70 kg of N that is still required would be side placed in the row when the plants are from about 10 cm in height and between the 8 to 14 leaf stage but before they exceed knee height. This will avoid the loss of critical N through leaching if long periods of soil saturation are experienced. Much of the N can be lost with only a week of saturated soil conditions.

As can be seen the ‘forgotten’ nutrient sulphur (S) is removed or required at a rate of 4 kg/ha. Some companies sell a nutrient mix containing sulphur, but it is highly recommended to side dress with a mixture of quickly available nitrogen as well as sulphur.

Consult your fertiliser agent or consultant for the various options available. Some farmers apply all the nutrients at planting these days but run the risk of losing nitrogen. On the other hand, as happened this last season, farmers couldn’t get into the lands, due to high rainfall conditions, to side dress the necessary N. This shows up in second or third cobs that have no pips in the top third or more of the dry cobs harvested. The ideal practices for the application of granular or liquid fertilisation should be identified.

The methods discussed above can be used for all the other crops planted.

CONCLUSION
Understand your soil tests so that you can fertilise at optimum levels for the next crop. 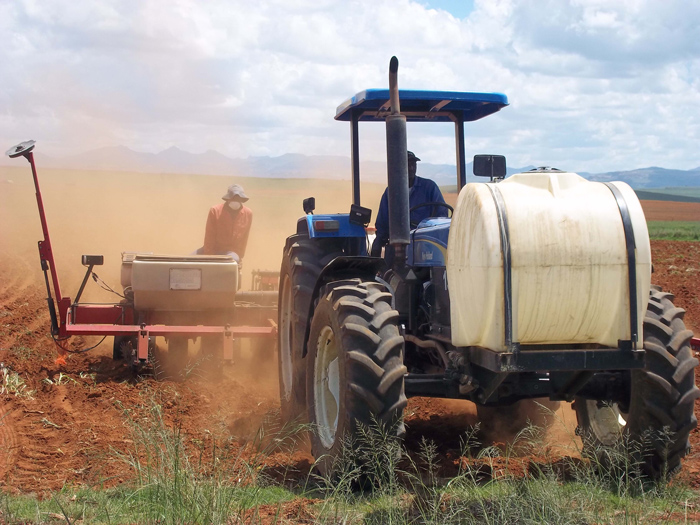