Soil erosion in South Africa - its nature and distribution 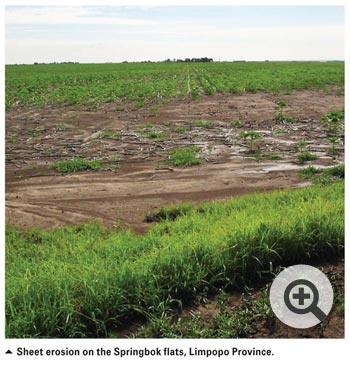 Soil erosion is a major environmental problem confronting land and water resources in South Africa. Although soil erosion is a natural process, it is often accelerated by human activities, for example by the clearing of vegetation, soil tillage or overgrazing.

Poor farming practices as well as the trend toward agricultural intensification have been considered to be major causes of erosion. Soil formation is a relatively slow process and therefore soil is essentially a non-renewable and a limited resource.

Prolonged erosion causes irreversible soil loss over time, reducing the ecological (e.g. biomass production) and hydrological functions (e.g. filtering, infiltration and water holding capacity) of soil. Several scientists agree that the cost of food production is increasing in many parts of the world due to erosion and loss of nutrients.

Soil erosion not only involves the loss of fertile topsoil and reduction of soil productivity, but is also coupled with serious off-site impacts related to increased mobilisation of sediment and delivery to rivers, causing siltation and pollution of South Africa’s water resource.

Water scarce countries, such as South Africa, are increasingly threatened by pollution and sedimentation of water bodies due to suspended sediment concentrations in streams. One of the main concerns of the Department of Water Affairs of South Africa is the mobilisation of eroded soil and its delivery to rivers and dams. For example, due to siltation, the storage capacity of the Welbedacht Dam near Dewetsdorp in the Free State reduced rapidly from the original 115 million cubic metres to approximately 16 million cubic metres within 20 years since completion in 1973.

As a result, the Mangaung Municipality in Bloemfontein recently received water from the more distant Katse Dam in Lesotho at a tariff of R2,20 per kilolitre instead of the normal 18,7 cents from the Welbedacht Dam (as reported by Marietjie Gericke in the Volksblad on Friday, 29 August 2014). The soil erosion/sedimentation problem may get worse in the future due to population growth and potential climatic changes. Given the increasing threat of the sedimentation/siltation of reservoirs, it is important to identify source areas and key processes of sediment transport from field to stream.

The most recent erosion map includes a gully erosion map for South Africa created by Dr Jay le Roux (previously at the Agricultural Research Council, but currently at the University of the Free State) and Mr Ndifelani Mararakanye (Department of Agriculture, Forestry and Fisheries) using satellite imagery.

SPOT 5 satellite imagery was utilised because it provides high resolution air, photo-like quality for erosion mapping and was acquired from government agencies for the whole of South Africa. As a result, the study successfully mapped over 100 000 gully erosion features ranging from just a few cubic metres to several hectares each. 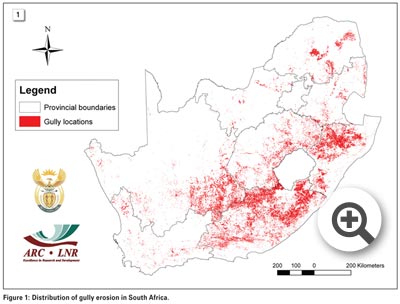 Prior to above-mentioned study, a soil erosion model, known as the Universal Soil Loss Equation, was used by Dr Le Roux and his colleagues to estimate rainfall erosion in South Africa. The model has sufficient simplicity for application on a national scale with incorporation of the main factors causing soil erosion including rainfall erosivity, soil erodibility, topography and vegetation cover (and management). 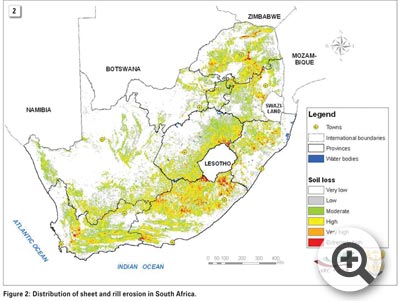 The results emphasise sheet and rill erosion and illustrate that areas with high erosion risk occur mostly in the eastern parts of South Africa (see Figure 2).

It should be stressed that these results give a broad overview of the general pattern of the relative differences, rather than providing accurate absolute erosion rates. It is also noteworthy that differences between sediment yield and soil loss can be very high. Research findings suggest that soil loss within a catchment can be up to five times greater than sediment yield due to the reduction of the total eroded volume by deposition within the catchment.

Consequently, a soil erosion figure of 12,6 tons/ha/year could correspond with a sediment yield of 2,5 tons/ha/year. Compared to Australia (4,1 tons/ha/year), the average predicted soil loss rate for South Africa is three times as much. South Africa has a higher soil loss rate than Australia, presumably due to extensive tillage-based cultivation and overgrazing. More than 60% of the country is currently under commercial and subsistence farming, while around 10% is under cultivation.

Due to limited financial resources it will not be feasible to rehabilitate erosion features with large and expensive structures at a broad/catchment scale. However, it is imperative to minimise current expansion of erosion with appropriate soil conservation measures or structures, expansion of conservation agriculture (CA) under cultivated areas and protecting the natural vegetation from overgrazing through rotational grazing management systems. 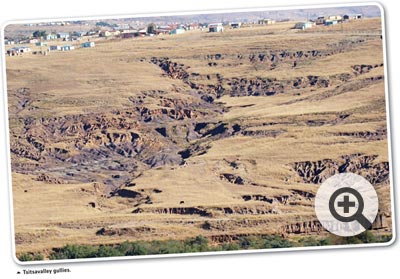 In addition to site-specific rehabilitation of existing erosion features, the identification and mapping of currently vegetated or erosion-free areas (that are susceptible to erosion) can be achieved. It is especially important to identify areas that are intrinsically susceptible to erosion before being extrinsically triggered or accelerated by land use and human-induced reduction of the vegetation cover. Appropriate strategies then need to be designed for susceptible areas in order to protect the current vegetation cover.

Excessively high soil erosion rates normally occur under aggressive tillage-based cultivation practices, especially on erodible soils during peak events (heavy thunderstorms) and on steeper, longer slopes. The potential of CA to protect and improve soil resources and improve production has been well documented. Under CA, crop residues are retained on the soil surface to protect it from the erosive impact of rain drops and wind.

The use of cover crops can further increase the crop canopy and ground cover on the soil, while the presence of permanent and strong living root systems in the soil, greatly enhances the resistance of the soil against erosion. Ultimately, the increased organic matter levels in the soil due to quality application of CA, is the key factor stabilising cultivated lands against the devastating effect of erosion.

Sustainable natural resource management practices, including CA, as well as area-specific management and control measures, will not only prevent soil loss and sustain agricultural production, but will also prevent sedimentation of water resources and increase the life span of dams in South Africa. For more information, contact Dr Jay le Roux at lerouxjj@ufs.ac.zaor Dr Hendrik Smith at hendrik.smith@grainsa.co.za.