Soil acidity and its management in crop production 2

2. Use of lime and gypsum in managing soil acidity 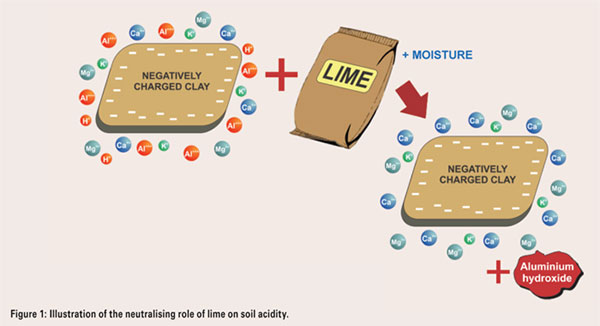 In the first article in this series, on page 52, we discussed the nature of soil acidity. Attention was drawn to the harmful effects of soluble aluminium on root growth and function, and how crop species differ in their ability to tolerate aluminium toxicity. In this second article, we focus on practical aspects of soil acidity management.

Lime and gypsum – how do they differ?

Lime and gypsum are chemically very different products, and consequently their effects on the soil are quite dissimilar.

In the agricultural context, “lime” refers to any product in which the calcium and magnesium compounds are able to neutralise soil acidity. Carbonates of calcium and magnesium are the most widely used for this purpose. Dolomitic lime contains a minimum of 15% magnesium carbonate, while calcitic limes have less magnesium carbonate than this. In addition to natural carbonates, various by-products of industrial processes are frequently used as liming materials; these include calcium oxide (burnt lime), calcium hydroxide (slaked lime) and calcium silicate (slag).

Gypsum, on the other hand, is calcium sulphate, a neutral salt. It is a valuable calcium and sulphur fertiliser and is much more soluble than lime. In addition, it leaches readily into the subsoil and in highly weathered (naturally acidic) soils, the sulphate component displaces OH-ions from the clay surfaces. These, in turn, convert soluble aluminium to unavailable aluminium hydroxide.

The effectiveness of various liming materials varies widely, with the following factors being particularly important in this regard:

Where uncertainty exists as to the quality of a particular liming material, a sample should be submitted for analysis.

Action of lime and gypsum in soils

The major effects of lime on soil properties are:

The neutralising effect of lime on soil aluminium and hydrogen is illustrated in Figure 1. Importantly, the soil must be moist for lime to react. The solid aluminium hydroxide formed as an end-product is non-toxic to plant roots.

An important consideration in the use of lime is that the alkaline component (carbonate) does not move downwards through the soil profile until the pH exceeds about 6. In clay and loam soils, the quantities of lime required to sustain such pH levels are usually uneconomic, but in sandy soils a lot less lime is required to elevate pH. Thus, in all but sandy soils with less than about 15% clay, lime has little impact on subsoil acidity.

Gypsum has little or no effect on topsoil pH, but as has already been indicated, in naturally acidic soils results in a “self-liming” effect due to the replacement of OH- ions by SO4-- ions. This can markedly lower the levels of toxic aluminium, and thus make subsoil moisture reserves accessible to roots. Gypsum incorporated in the topsoil will move downward into the subsoil within a season or two.

The different modes of action of lime and gypsum are summarised in Table 1.

Lime rates for crops such as maize and soyas, should be based on aluminium and acid saturation levels in the soil. The use of soil pH as a criterion for liming has been found to be unreliable, since at a particular pH, aluminium levels in soils may vary widely.

In terms of the application of lime and gypsum in the field, the following points should be borne in mind:

Timing and moisture
In liming soils for crop establishment, two important factors should be kept in mind: Most limes take a month or more to react, and moisture is necessary for the neutralisation reaction to take place. Therefore, application of lime a week or two before planting, particularly where the soil is severely acidic and the moisture status is low, will not prevent acidity damage to the crop.

Spreading and incorporation
It is absolutely essential that the lime and gypsum are uniformly spread, and that tillage operations ensure thorough mixing into the soil. Discing or harrowing followed by mouldboard ploughing is advocated to achieve adequate mixing.

Lime rate at any one time
A frequently asked question is “What is the maximum amount of lime that can be applied at any one time?” The answer is that, provided it is thoroughly incorporated into the soil, all the needed lime can be applied as a single dressing. In field trials, rates of lime of up to 20 tons/ha in one application have had no detrimental effect on the crop or soil.

Liming and no-till
Since lime is relatively immobile in soils, surface-applied lime is not as effective as incorporated lime in the neutralisation of soil acidity. This presents difficulties in managing soil acidity in no-till systems. Therefore, before converting from conventional tillage to no-till, it is essential that soil acidity problems are thoroughly corrected by incorporating the required amounts of lime and gypsum. Furthermore, in no-till operations it is advisable to prevent acidity problems by periodically topdressing with low rates (1 ton/ha to 2 tons/ha) of lime. The top-dressed lime will, with water movement and the assistance of earthworms, gradually be moved into the soil.

Since gypsum is not nearly as effective as lime in counteracting acidity, it should not be used as a substitute for lime in the correction of topsoil acidity. Furthermore, where gypsum is applied, the lime used to neutralise topsoil acidity should be dolomitic, since gypsum causes magnesium to leach out of the topsoil.

Yield responses to lime and gypsum

In this instance, plots on both the left (drought stricken) and the right (flourishing) had exactly the same history of N, P and K fertilisation; however, the severe aluminium toxicity in the plot on the left had not been corrected by liming.

Photo 2 provides visual evidence of the benefit of gypsum on a soil with severe subsoil acidity problems. Both plots had received 15 tons/ha of dolomitic lime eight years previously, but the plot on the right had also received 10 tons/ha of gypsum. Maize plants on the gypsumtreated soil could exploit subsoil moisture due to deep root proliferation, but on the lime-only treated soil, there was no root development below 500 mm.