Soil acidity and its management in crop production

1. The nature of soil acidity and its diagnosis

Acid soil conditions restricting crop growth occur widely in the eastern parts of South Africa. In the higher rainfall regions, soils are often naturally acidic; however, human intervention may accelerate acidification. It is worth noting that soil acidity problems are by no means unique to this country: Worldwide, approximately 30% of the land available for cultivation is acidic.

Producers frequently find it difficult to get to grips with the various soil acidity parameters listed in soil test reports, and furthermore, may be presented with conflicting advice regarding the use of products such as lime and gypsum.

The purpose of these articles is to provide scientifically sound and practically useful answers to questions such as: “What exactly is soil acidity?” How does it impact crops?”, and “How is it best managed?”

Soil acidity – what is it, and what causes it?

In order to gain a working understanding of soil acidity, there is a need to touch on some basic soil chemistry.

Clays and organic matter in the soil carry a negative charge. In a soil that is not acidic, this negative charge is balanced by the positive charge on certain plant nutrients, in particular calcium (Ca++), magnesium (Mg++) and potassium (K+). As soils acidify, concentrations of other non-nutrient elements, in particular hydrogen (H+) and aluminium (Al+++), increase and they take the place of nutrients such as calcium and magnesium on the clays and organic matter (Figure 1).

Under non-acidic conditions, the aluminium is contained in the clay particles, but as acidity increases, clay edges start dissolving, releasing soluble aluminium into the soil. Importantly, from the perspective of managing soil acidity, it is the soluble aluminium which is the most important growth-limiting factor in acid soils.

Furthermore, it must be borne in mind that pH measures only the concentration of hydrogen in the soil, and not that of aluminium. These considerations are of cardinal importance in terms of the development of economically sound recommendations for the correction of acidity problems.

What causes soils to acidify? Although, as noted earlier, acid soils occur widely in nature, the following human activities may markedly accelerate acidification:

The effects of soil acidity on crop growth tend to be insidious, in that it is in the root zone where the major impact occurs. Damage caused to the root system and the unfavourable soil chemistry associated with excessive acidity, are translated into poor crop growth, with there frequently being no classical leaf symptoms as are often apparent with deficiencies of, for example, N or K. Specific detrimental effects of soil acidity include the following: 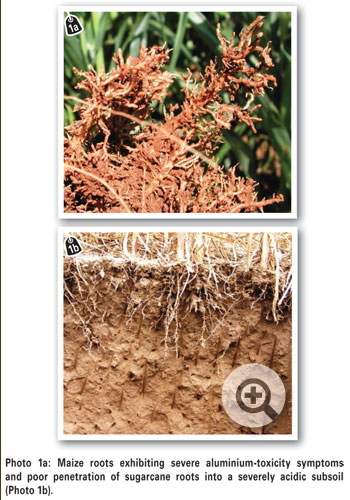 Aluminium and manganese toxicities
Aluminium and occasionally high amounts of manganese, released from clays as the soil acidifies (Figure 1) are toxic to plant roots and result in poor and abnormal root development. Typically, roots become thick and stubby and there is little development of the all-important fine roots (Photo 1a and b).

The resultant inefficient root systems limit yields through poor water and nutrient uptake. Importantly, in seasons of reduced rainfall, aluminium toxicity greatly magnifies the effects of drought. Where subsoils are also acidic, the situation with regard to moisture supply is aggravated further in that moisture reserves in the subsoil are largely unavailable to plants because of restricted root penetration into the lower soil layers (Photo 1a and b). Under these conditions it is not uncommon to see plants displaying symptoms of drought stress even on relatively moist soils.

Researchers have found that the degree to which plant roots are affected by aluminium toxicity depends on the relationship between the quantity of aluminium and the quantity of bases (principally calcium and magnesium), rather than on the level of aluminium alone. The aluminium toxicity hazard is therefore represented on soil test reports by the soil acid saturation index – this being a far more reliable indication of the acidity hazard than soil pH.

Micronutrient deficiencies
Deficiencies of micronutrients, in particular molybdenum and zinc, frequently limit plant growth on acid soils. In the case of molybdenum, most soils contain adequate reserves of this nutrient for plant growth, but its availability for plant uptake is minimised under acid conditions.

Soil biological activity
Acid soil conditions impact negatively on soil biological activity. Evidence of this is the retardation in the breakdown of surface-applied organic matter (e.g. trash) on acid soils. Interestingly, most earthworm species are sensitive to soil acidity, and liming frequently results in a rapid increase in earthworm populations.

Agricultural crops do not all respond in the same way to acid soil conditions, but vary widely in their tolerances to soil acidity (Figure 2). Certain vegetables and temperate legumes are highly sensitive to acid soil conditions, while crops such as cowpeas and sugarcane are highly tolerant. Nevertheless, severe soil acidity has been shown to limit the growth of all species, including the highly tolerant ones. Thus, the management of soil acidity is an essential component of sustainable production practices, regardless of the crop grown. 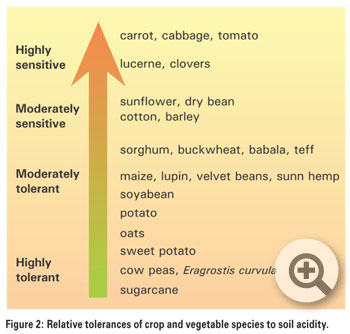 Diagnosis of the problem

Soil acidity is not easily detected from symptoms in the above-ground crop, and soil analysis remains the only reliable means of identifying the problem and of determining lime and gypsum requirements.

In this article space does not allow for a detailed description of sampling procedures; nevertheless, the importance of obtaining truly representative samples for laboratory analysis cannot be over-emphasised.

It is worth noting that initial evidence of excessive soil acidity is frequently in the form of patches of weak crop growth in an otherwise healthy (good) stand (Photos 2a and b). For the optimisation of production, it is obviously essential that the acidity problems in the weak areas are corrected. With this in mind, soil samples should be taken from these weak patches during the early growth stages of the crop when the poor growth is clearly visible. Samples taken from the whole field after removal of the crop may be biased by the more favourable soil conditions in the “good” areas. Once the problem has been accurately diagnosed, the “poor” areas may be treated, either by liming them separately or liming the field as a whole at the rate recommended for the “poor” areas.

With the aid of GPS technology, grid soil sampling of fields is a particularly powerful tool for managing variability in soil acidity and other soil fertility factors. Using computer mapping techniques, grid soil sampling data are converted into treatment maps, and variable rate applications of lime and nutrients can then be imposed. As a result, higher yields from hectares that were being under-limed or under-fertilised, coupled with reduced input costs for the hectares with adequate fertility, translate into greater profits.

In the second article in this series (on page 54), we will consider the properties of lime and gypsum, together with practical aspects of managing both top and subsoil acidity.