Recently this disease has spread in the local sunflower production areas with high incidences, up to 90%, being recorded in fields in the North West Province and northern Free State provinces of South Africa. This last season severe damage was recorded in the primary sunflower production areas, which implies that there are high levels of inoculum on these fields that may cause challenges this coming season should late rains be experienced.

The continued spread of this disease is a major threat for sunflower production in South Africa. Increased disease pressure will also impose an increased threat on production of other susceptible crops, particularly soybeans.

The wide host range infected by the disease and increased disease pressure will indirectly impact on maize production by reducing much needed crop rotation options, particularly where conservation tillage practices are on the increase. A lack of alternate crops in crop rotation systems will force producers to plant maize under monoculture, which, particularly under conservation tillage systems, brings a different set of disease problems. 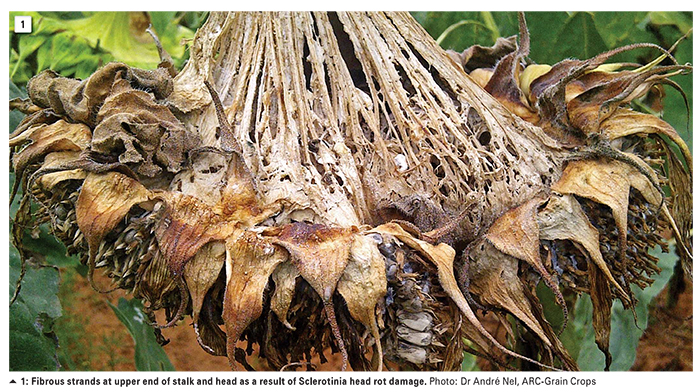 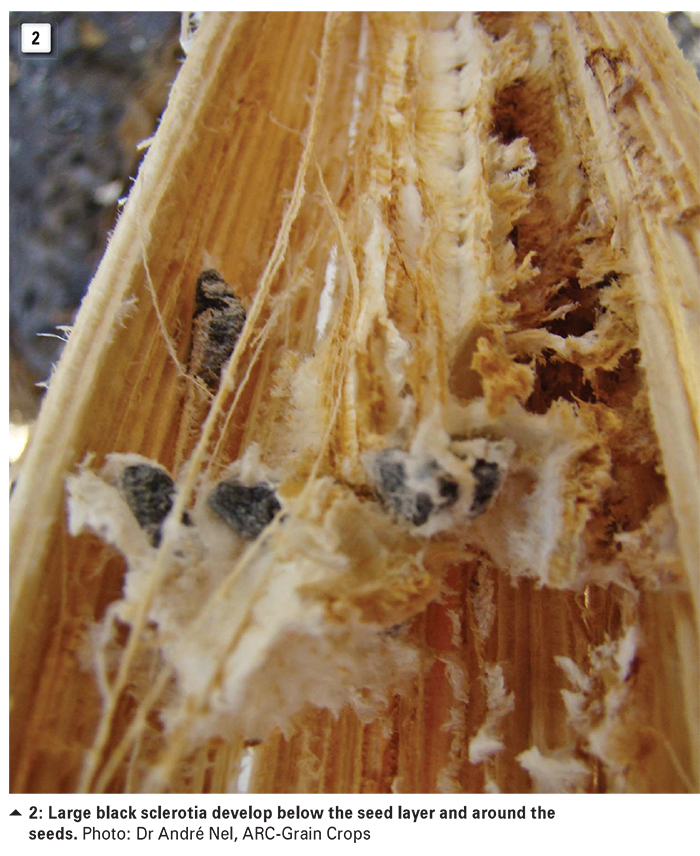 Biology of the disease
Head rot
During periods of high rainfall and cool temperatures during head fill, the disease is most prominent. Saturated soil results in production of apothecia from germinating sclerotia. These apothecia are small mushroom-like fruiting bodies and look like a golf tee.

Apothecia form and release spores into the air, which are windborne and infect the sunflower head during wet weather. The spores use dead flower parts as a food source as they cannot infect healthy tissue.

Once the fungus becomes established, it produces oxalic acid, which kills tissues, as well as extracellular enzymes, which digest tissues, and enable rapid ramification of the fungus throughout the head. Wounds on the back of the sunflower heads may become infection sources and initiate head rot.

Control
Management
Outbreaks of sunflower head rot may result in infestation of lands previously free or with low levels of Sclerotinia. These infestations restrict the producers’ options in terms of alternate crops to be used in rotation systems with maize, due to the wide host range infected by Sclerotinia.

The infested fields are a threat to sunflower, which may be planted again after a season’s maize, since Sclerotinia stem rot may occur irrespective of weather conditions. The suggested norm is to avoid planting sunflowers on infested fields for five to eight years.

Under local production conditions this may entail planting maize under monoculture for at least five seasons. Rotation will reduce stem rot more significantly than head rot. Head rot can still develop from windborne spores blown in from surrounding areas.

Deep burial of sclerotia prevents them from producing apothecia. One must avoid bringing these buried sclerotia to the surface in following seasons. Once they return to the soil surface and are still viable they can again cause disease. Deep burial and planting of other carefully selected non-host crops in rotation with maize will reduce inoculum.

Resistance
Tolerance to stem and head rot does occur. In the USA (North Dakota) genotypes are screened annually. Genotypes may be tolerant to head rot and not stem rot and vice versa.

No genotype is resistant. Tolerance is influenced by weather conditions. Locally, genotypes need to be screened and mechanisms of tolerance need to be determined for significant progress to be made for use in local management systems.

Chemical control
Desiccants that result in early dry down may be sprayed on the crop after physiological maturity to reduce the impact of further development of Sclerotinia head rot and sclerotial development.

Benomyl as a seed treatment is the only currently registered fungicide on sunflowers in South Africa. Procymidone is registered on soybeans as a spray, but timing of the spray is critical and for sunflowers there are serious economic implications should it ever be registered. This aspect needs to be thoroughly researched before being included in management systems.

Biological control
Bayer has a biocontrol product on the market called Contans, which is a fungus, Coniothyrium minitans. Contans is made up of spores of this biocontrol fungus that attacks the sclerotia whilst still in the ground prior to them developing apothecia.

The earlier the product can be applied to fields known to have previous Sclerotinia head rot outbreaks the more efficient it becomes.

Planting
Plant sunflowers early to avoid wet, cool conditions during flowering to reduce head rot infections. Avoid planting sunflowers next to infested fields that could be a source of spores. Plant clean sunflower seeds as infected seed may be a primary source of inoculum in uninfected fields.

Summary
Sclerotinia head and stem rot are a significant threat to the local sunflower industry – particularly in wet seasons. Recent surveys done by the ARC have shown that epidemics are sporadic over seasons and localities. Although a lot of research has been done on this disease, very few management solutions have been developed.

Research on tolerance, mechanisms of tolerance, chemical control and timing thereof with use of prediction models need to be researched. It is critical to reduce the threat of Sclerotinia in local crop production due to its wide host range and ability to survive.

Increased occurrence and incidence of this pathogen on susceptible hosts will also impact on the maize industry in reducing options for maize crop rotation systems as well as impact on the maize price should large areas of arable land be planted to monoculture maize.