Sclerotinia head and stalk rots of sunflower are caused by a fungus known as Sclerotinia sclerotiorum. This fungus is able to infect a wide range of field crops including soybeans, beans, canola and lupines as well as various vegetable crops. 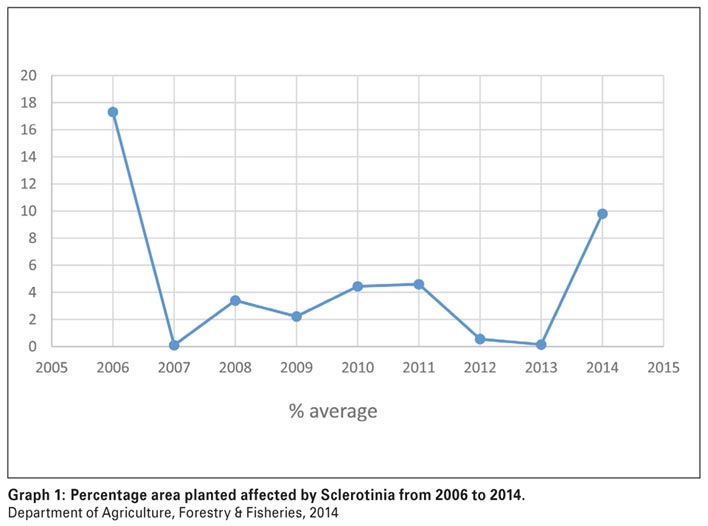 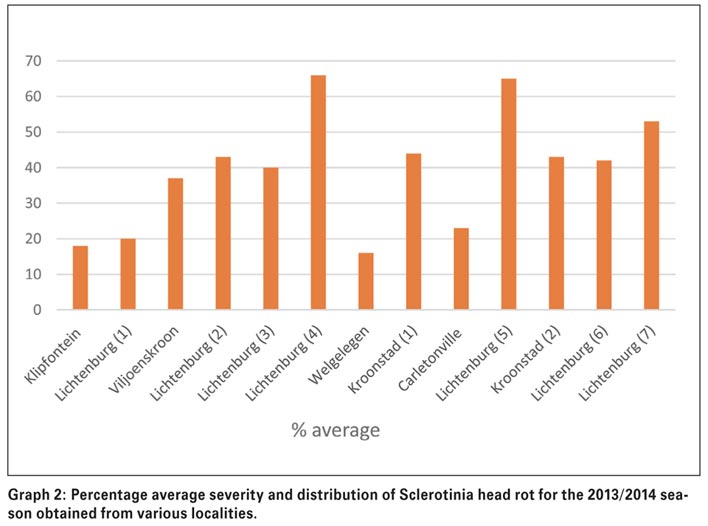 Results from the Crop Estimates Committee correlate with the sunflower disease severity surveys carried out by the ARC-Grain Crops Institute (ARC-GCI) in Potchefstroom during the 2012/2013 and 2013/2014 seasons. The report from the severity survey indicated that Sclerotinia head rot was only found in the Delmas area (30%) in 2012/2013 whereas in 2013/2014 the disease spread to all major sunflower production areas causing epidemics of up to 60%, with the North West Province being hit the hardest.

The 2012/2013 season was a dry season compared to the 2013/2014 season, hence the huge differences in Sclerotinia disease epidemics and distribution.

How to identify the Sclerotinia diseases

Sclerotinia head rot
The fungus infects the back of the head during flowering and as the disease progresses, the tissues become soft, light brown and spongy (Photo 1). This infection extends into the developing head and down the stalk and eventually only the fibrous strands at the back of the head and upper stalk remains (Photo 2). The infected seed at the front of the head eventually falls out of the head due to the sheer weight of the infected seed. Large, black sclerotia (small, bird-dropping like, black particles) (Photo 3) develop below the seed layer and around the seeds.

Sclerotinia stem rot
Initial symptoms are sudden wilting of the plant, particularly during grain fill and a light brown, water-soaked area at the stem base will become obvious. The sunflower stem pith is a white, cotton-like tissue, which includes mycelial growth where large black sclerotia form within. Sclerotia can sometimes be seen on the outside of the stalks of sunflower plants when the plants get older (Photo 4). The stem will often break at this point of infection and when ripped open, black sclerotia can be seen (Photo 5). Heads do not fill properly due to nutrients and water not being taken up by the plant.

How does Sclerotinia infect sunflower plants?

Sclerotinia head rot
The fungus survives in the field as sclerotia in the soil and in plant debris. Sclerotia may survive for a period of up to four to seven years in the soil. Infection occurs during the flowering stage when there is high rainfall and cool temperatures. Wet soil results in the production of apothecia (small, mushroom-like, fruiting bodies) (Photo 6) from germinating sclerotia. Apothecia form and release spores into the air, which are windborne and can infect the sunflower head during wet weather. Wounds on the back of the sunflower heads may become infection sources and initiate head rot. 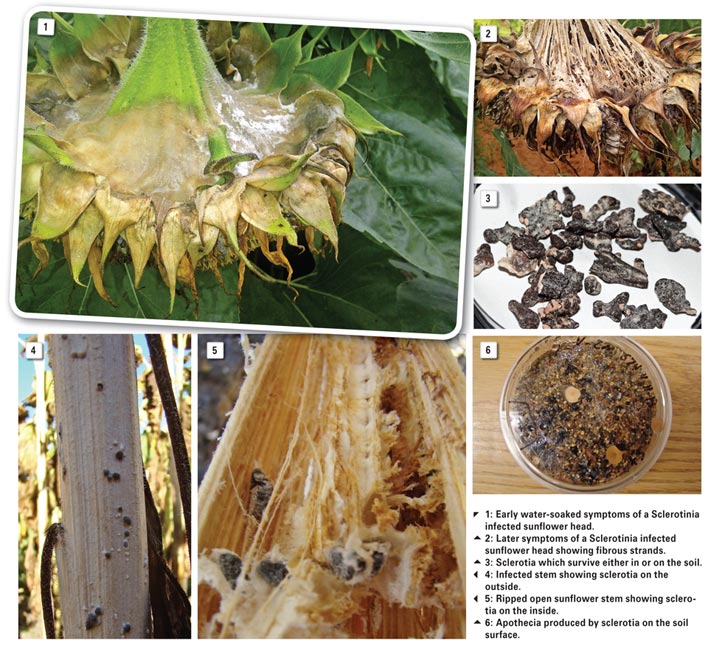 Sclerotinia stem rot
In summer, when sunflower roots come in contact with the sclerotia, the sclerotia germinate and infect the roots. The fungus grows from the infected root into the taproot and forms a canker at the stem base.

This infection prevents the plant from taking up water and nutrients and the plant eventually wilts and dies. Neighbouring plants may be infected by root-to-root contact with infected plants. Development of stem rot is almost independent of weather conditions.

How to manage the disease

Outbreaks of sunflower head rot may result in infestation of lands previously free or with low levels of Sclerotinia. The infested fields are a threat to sunflowers and various susceptible crops, which may be planted again after a season’s maize, since sclerotia may survive for long periods in infested soil.

The suggested norm is to avoid planting sunflowers on infested lands for a period of five to eight years. Under local production conditions this may entail planting maize under monoculture for at least five seasons.

Rotation will reduce stem rot more significantly than head rot. Head rot can still develop from windborne spores blown in from surrounding areas. Deep burial of sclerotia prevents them from producing apothecia. One must however avoid bringing these buried sclerotia to the surface in following seasons as they can then result in the disease developing again.

Local sunflower hybrids need to be screened and the mechanisms of resistance need to be determined for significant progress to be made for use in local management systems. Application of Benomyl as a seed treatment is currently the only registered fungicide on sunflowers in South Africa.

Researchers at the ARC-GCI in collaboration with the University of the Free State are presently involved in the evaluation of various biological control products and modelling of disease epidemics to optimise fungicide sprays for use in South Africa. Control of broadleaf weeds and volunteer sunflowers reduces possible inoculum increase by reducing possible alternate hosts of Sclerotinia. Avoid planting sunflowers next to infested fields that could be a source of spores. Plant clean sunflower seed as infected seed may be a primary source of inoculum in uninfected fields.

Why is it crucial to prevent the disease?

Reports from the Crop Estimates Committee and the ARC-GCI survey shows that epidemics fluctuate yearly due to changes in environmental climatic conditions. This indicates that in a dry season the epidemics could be very low whereas in wet seasons when conditions are favourable, epidemics can be devastating.

This disease is capable of wiping out the entire sunflower planting on an individual producer’s fields causing total sunflower loss in one season. The disease was so severe in the Lichtenburg area during the 2013/2014 season that some producers had to spray chemicals to dry their crops and stop the infection from progressing to the rest of the sunflower head.

This was done so that they could harvest earlier. Others opted to plough their crops down. The potential economic impact caused by this disease is so severe that it could lead to producers abandoning the crop thereby reducing the total area planted. This will result in increased imports and sunflower prices and a risky maize rotation crop.