The South African National Seed Organisation (SANSOR) held its 28th Annual Congress on 4 and 5 May this year in Oubaai in the Western Cape. The new leadership of the organisation where also elected.

Mr John Odendaal, the chairman of the Agronomy Division high-lighted the following from the past year:

‘The effects of the strong El Niño phenomenon during the 2015/2016 season were felt well into the 2016/2017 season as producers in many areas, but particularly the west, endeavoured to recover from the economic impact of the consequent drought, which was one of the worst in recent memory.

‘Commercial crop areas which had a negative impact on industry seed sales – particularly maize which dropped to 1,947 million hectares and soybeans which dropped sharply off the rapid growth trend of the past few years – bounced back in the 2016/2017
season.

‘Sunflower plantings, which were higher than normal in the previous year mainly as a result of late plantings in the west, returned to more or less normal hectares in 2016/2017.

‘Commodity prices responded, in particular white maize which peaked briefly over R5 000/ton as a result of reduced planting in the west. Yellow maize prices were significantly lower, but still high.

‘The increased plantings and anticipated good general yields during the 2016/2017 season have however seen the trend reversed with prices likely to drop below the R2 000/ton mark this season.

‘One of the main achievements of the Agronomy Division Committee during the past season was SANSOR’s contributing towards the implementation of the wheat and barley end point royalty.

'It was successfully published in the Government Gazette in September 2016 and came into effect on 1 October 2016. SANSOR currently have two representatives on the board of the South African Cultivar and Technology Agency (SACTA).

‘During the past year, the Agronomy Division held its customary biannual meetings, the first taking place on 2 August 2016 and the second on 2 February 2017. 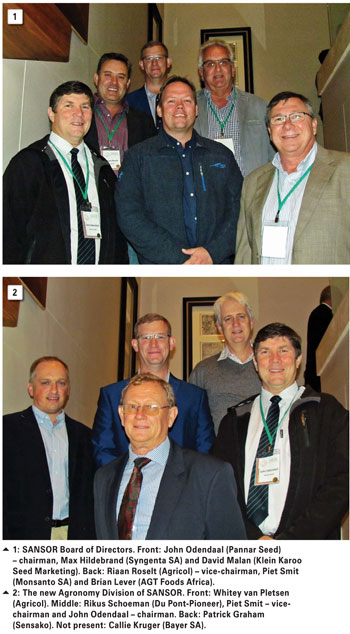 ‘Following the recent confirmation of fall army worm, a quarantine pest that holds threats for both local agriculture and international trade at several locations in South Africa, SANSOR management has been very proactive in working with the Department of Agriculture, Forestry and Fisheries (DAFF) and Grain SA in developing management strategies for the pest. This will continue to remain a priority. Support for the implementation of the soybean end point royalty will remain another key focus area.

‘Another important pending issue is that an application for the reduction in rate of duty on the import of canola seed will be submitted in early 2017. SANSOR has procured the services of a consultant to represent and support a SANSOR member for the purposes of this application. The application is detailed and the process arduous and time consuming. As an industry, we are grateful for the support of Agricol and the SANSOR secretariat in facilitating a solution.’