The basement of the Southern African Grain Laboratory (SAGL) at the Grain Building in Pretoria was converted into an elegant venue to host a celebration on 26 June this year.  This event marked the launch of the SAGL’s new crop protection division and coincided with their 20th anniversary.

The SAGL was established in 1997 after the agricultural marketing boards were dissolved. Two of the founding members of the SAGL, Mr Jannie de Villiers (CEO of Grain SA) and Ms Mariana Purnell (general manager: Agbiz Grain), who are directors on the SAGL board, were amongst the guests. Both shared recollections about the company’s humble beginnings and growth, which they witnessed over the past 20 years. They are excited to still be part of this successful organisation.

In his opening, De Villiers stated that they had declared their dependency on the Lord from the initial planning of the organisation and know this is the reason why the company has reached new heights. ‘Even though people thought it would not be possible to establish the SAGL, here we are, 20 years later launching the new crop protection division.’ He added that this new development will allow the SAGL to serve a larger part of the agricultural industry.

Mr Boikanyo Mokgatle, chairman of the SAGL board of directors, said that the SAGL has established itself as a market leader. The event was an opportunity to celebrate the people who have made this achievement possible. He made a special mention of the personnel who had been part of the team for the entire 20 years and had made the growth of the institution possible.

Head of Standard Bank’s Agribusiness, Mr Nico Groenewald, highlighted their financial involvement in supporting role-players who, like the SAGL, play a vital role in the success of the agricultural industry. Standard Bank decided to get involved in financing the establishing of the new crop protection division because of the important role the SAGL plays in ensuring food safety. According to Ms Cecilia Breedt (laboratory manager: Crop Protection Division) the new crop protection division specialises in the analysis of agricultural formulations and technical material for registration and quality control of plant protection products according to international standards.

Both the crop quality and the crop protection divisions of the SAGL are accredited under the international ISO 17025 standard. Part of the ISO 17025 accreditation process is the continuous proof of technical competency, international comparability and traceability to international standards through the participation in international proficiency schemes. The South African National Accreditation System conducts surveillance audits within an 18-month cycle to confirm that the SAGL complies with the requirements. 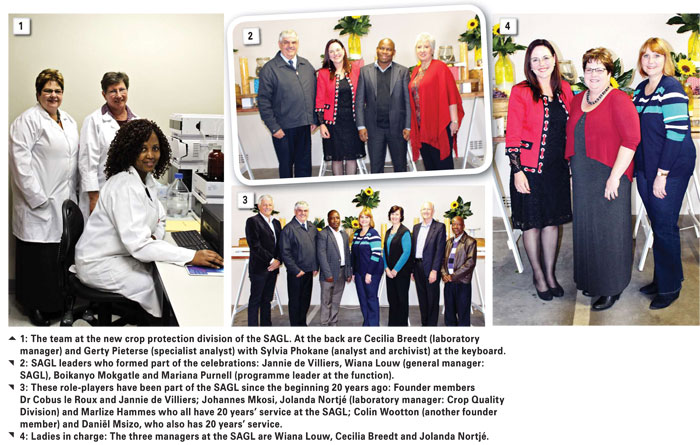