SACOTA and arbitration's role in our grain and oilseed industries

Since the dawn of time, humanity has been buying, selling, bartering and trading. As there are at least two parties to every trade, we can assume that ever since the first trade, disputes arose and a method was needed to settle these disputes.

During the middle ages, the traditional way of settling disputes was to fight to the death in the presence of the king, or one of his senior officials. It was believed that the Lord would assist the party that had the law on his side. This was clearly shown by the guilty party being killed in the fight.

Gangsters, such as the legendary Al Capone, still used these old methods, even in modern times. Luckily for us, such deadly methods are no longer popular among business people and have been replaced by more conventional methods of settling disputes.

These methods are, in order of increasing aggression:

With the increasing cost and complexity of litigation and the long delays in bringing disputes to court, and thereafter judgments, appeals and further appeals, mediation and arbitration have become more popular over the past decades and are generally known as alternative dispute resolution.

Disputes involving technical issues as well as those requiring specific industry knowledge, lend themselves to the arbitral process, which has some distinct advantages over litigation.

One of the first projects that the South African Cereals and Oilseeds Traders Association (SACOTA) instigated, was to develop a Standard Contract, SAGOS 1 (South African grains and oilseeds) for members and anyone else who would like to use it. From the start, the contract incorporated a mandatory arbitration clause. No dispute could be litigated. All disputes would have to be arbitrated.

The SAGOS contract has been revised several times with the current version being SAGOS 1 Ver. 9. This latest version incorporates a major change in the arbitration procedure. From the beginning of 2013 all arbitrations would be administered by the Arbitration Foundation of South Africa (AFSA) and would use the AFSA Expedited Rules for arbitrations. More information on AFSA’s role will be given below and can also be obtained from the AFSA website (http://www.arbitration.co.za).

To ensure that there were sufficient grain experienced and arbitration trained arbitrators available, nine individuals were nominated by SACOTA, GSA, NCM, and AFMA and underwent an arbitration course funded by the Maize Trust. Over the past years a number of them did not continue with arbitration work and the requirements to become an AFSA approved grain arbitrator have changed.

Currently anyone who wishes to become a grain arbitrator must: 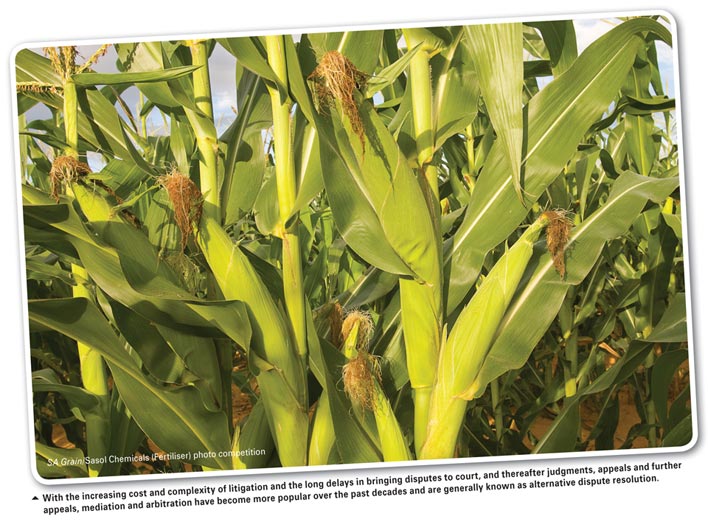 The role of AFSA in arbitrations

AFSA is the administrative body which manages the arbitration in all its aspects, but has no input in the arbitral award, which is decided by the arbitrator.

The role of the arbitrator

The arbitrator is an independent, objective person with experience in the grain trade, who will take evidence from both parties, decide on any interim issues between the parties and eventually issue an award.

The arbitrator effectively has a similar power to that of a court and can make findings and rulings as the arbitral process progresses.

The arbitrator will manage the process and progress of the arbitration. He will set deadlines for presentation of the claimant’s claim, for the defendant’s response, and then for the claimant’s reply on the defendant’s defence. His aim will be to give both parties a chance to fully express their claim and defence and to keep the process fair without any unnecessary delays.

This clause can be changed if both parties agree to have legal representation in the arbitration.

Arbitrators in their personal capacity are permitted to act as advisors to one or other of the disputing parties, but then that person will not be acceptable as an independent arbitrator for that dispute.

Thus it is important to decide beforehand whether you will be approaching an arbitrator to ask for advice or to propose that you would like him/her to act as arbitrator in your dispute.