The sunflower (Helianthus annuus L.) is the most important cultivated oilseed crop in South Africa. Annual production ranges from 500 000 tons to 700 000 tons. Sunflowers are hosts to many pathogens, which cause various diseases such as Sclerotinia head rot, Alternaria leaf spot, bacterial head rot and brown rust (Photo 1, Photo 2, Photo 3 and Photo 4).

These diseases possess potential risks to production and may reduce yields, depending on seasonal conditions and geographic locality. Increased enquiries from producers prompted the necessity for seasonal surveys to determine which diseases predominate in a particular area and on which cultivars.

73 sunflower production sites including the ARC-Grain Crops Institute (ARC-GCI) national cultivar trials and producers' fields were screened and diseases quantified over a period of three seasons, 2012/2013, 2013/2014 and 2014/2015 respectively.

The ARC-GCI replicated national cultivar trials, cultivars SYN 4045, PHB 65A25, SYN 4200 and PAN 7049 were surveyed, as well as producers' fields. 30 plants were randomly selected at three points within the field and surveyed for disease incidence and severity. A questionnaire regarding sunflower farming practices was completed with producers during the surveys.

The 2012/2013 disease survey results of the cultivar trials indicated that percentage average disease caused by Alternaria on all four cultivars was 65%, whereas in all producers' fields surveyed it was 60%.

Other prominent diseases in producers' fields such as brown rust (84%) in Arlington, Sclerotinia head rot (31%) in Delmas and Phoma stalk rot (96%) in Naboomspruit were also observed.

The questionnaire results showed that diseases, poor emergence and drought were the major sunflower production constraints (Graph 1). The severity of diseases caused by Alternaria obtained from both cultivar trials and producers' fields was higher in the 2012/2013 and 2014/2015 seasons when compared to the 2013/2014 season.

Overall results showed a shift in disease distribution, incidence and severities on sunflower crops when comparing the 2012/2013, 2013/2014 and 2014/2015 seasons' surveys. In the 2012/2013 and 2014/2015 seasons there were high disease incidences and severities of Alternaria leaf spot, primarily in the North West Province (Table 1, Table 2 and Table 3), whereas, in the 2013/2014 season the severity of Alternaria leaf spot decreased considerably while the distribution increased to all major sunflower production areas (Table 2).

Although no significant difference between infected cultivars was recorded during the 2012/2013 season, disease severity based on locality differed significantly (Table 1).

In contrast, both localities (Table 1) and cultivars (Table 4) showed significant differences during the 2013/2014 season. 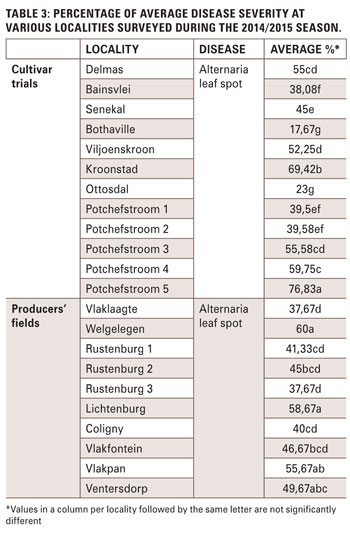 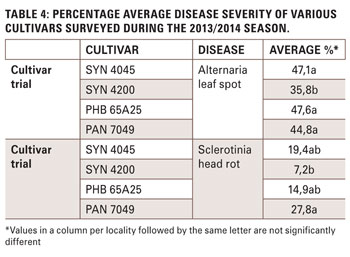 Other prominent diseases such as brown rust (84%) in Arlington, Sclerotinia head rot (31%) in Delmas and Phoma stalk rot (96%) in Naboomspruit were observed in producers' fields during the 2012/2013 season (Table 1).

In the 2013/2014 season, the spread of Sclerotinia head rot increased considerably, occurring in all production areas and causing severe damage to sunflower fields (Table 2). Heavy rainfall received earlier in the season contributed to the development of Sclerotinia head rot epidemics. Compared to other localities the most severely affected locality was Lichtenburg (Table 2).

Cultivar SYN 4200 was less susceptible to Sclerotinia head rot when compared to PAN 7049 in the 2013/2014 season (Table 4). Bacterial head rot was recorded in one producer's field in Dwaalboom and brown rust was recorded in Arlington, Bloemfontein and Welgelegen.

No Sclerotinia incidences were recorded in the 2014/2015 season. The questionnaire results for the 2012/2013, 2013/2014 and 2014/2015 seasons' surveys showed that diseases and drought were the major sunflower production constraints identified by producers. Most producers prefer crop rotation, planting their sunflowers in an east-west and south east-north west row direction, using row widths wider than 80 cm and plant densities of above 30 000 (Graph 1, Graph 2 and Graph 3). 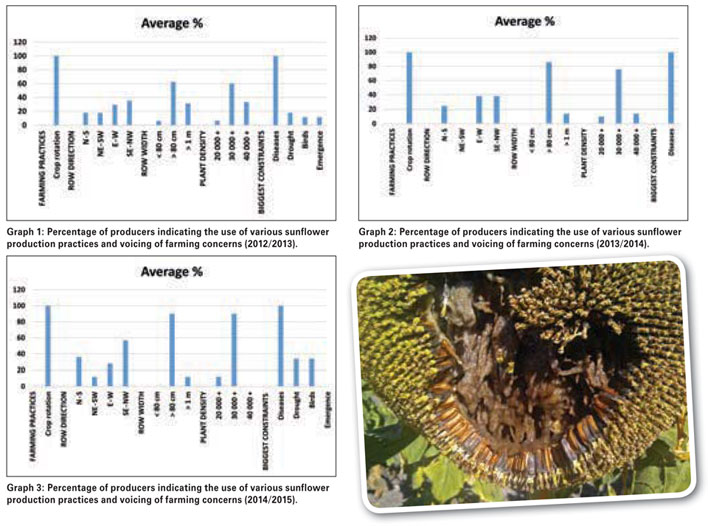 There were great variations in disease incidence and severity over localities surveyed, which is influenced by primary inoculum levels, hybrid susceptibility and seasonal climatic conditions. For example, in the 2012/2013 and 2014/2015 seasons there was a drought throughout the major sunflower production areas and Sclerotinia head rot was not prevalent.