In South Africa, the supply of high quality, healthy maize is a national priority since maize represents the staple food of many South Africans. Moreover, maize is of great importance as feedstock in the animal and poultry industry.

In nature most cereal grains, oil seeds, tree nuts, fruits and dehydrated fruits are susceptible to contamination by mycotoxin-producing fungi during the pre-harvest (production), post-harvest (storage) and processing stages.

These fungi have the ability to produce some hazardous toxins, called mycotoxins such as the fumonisins, aflatoxins, zearalenone, ochratoxins, trichothecenes (deoxynivalenol [DON] and nivalenol [NIV]) and diplodiatoxins (diplonine).

Mycotoxins pose an enormous threat to the international trade in foods and feeds. Post-harvest losses in the developing world, in particular, are severe because of inadequate storage facilities and the consequent poor quality of the produce. It is claimed that approximately 60% of Africa’s grain supplies are at risk owing to fungal contamination and mycotoxin formation, thereby contributing to food insecurity.

The more than 300 known mycotoxins comprise small-molecularweight compounds, derived from the secondary metabolism of several fungi, including members of the genera Aspergillus, Penicillium, Fusarium, Claviceps, Stenocarpella and Alternaria.

The global health threat of mycotoxins to mankind is based on well documented human mycotoxicoses such as ergotism, alimentary toxic aleukia in Russia, acute aflatoxicoses in South and East Asia, and human primary liver cancer in Africa and South East Asia.

The fumonisins are implicated in the aetiology of the high incidence of oesophageal cancer among the inhabitants of the former Trans kei region of South Africa, China and Iran and with clusters of birth defects, i.e. neural tube defects such as anencephaly and spina bifida, occurring in different parts of the world such as on the Texas- Mexico border.

Although the role of mycotoxins in diseases among domestic animals is better established, diagnosis of the mycotoxicosis is extremely difficult owing to the numerous pharmacological effects of the causative toxins, for example aflatoxins (Turkey-X disease), fumonisins (leukoencephalomalacia in horses and pulmonary oedema in swine), ochratoxins (nephropathy in swine [Danish porcine nephropathy]), phomopsin A (lupinosis in sheep), sporidesmin A (facial eczema in sheep) and zearalenone (hyperoestrogenism, vulvovaginitis and abortion in swine). Outbreaks of diplodiosis amongst farm animals are linked to feeds contaminated with Stenocarpella maydis.

Aflatoxin remains the most widely legislated mycotoxin. At least 99 countries have regulatory limits for AFB1 or the sum of AFB1, AFB2, AFG1 and AFG2 in food and/or feed. Levels for DON, fumonisin B1 and fumonisin B2 are regulated in South Africa since 2016.

In 2009, on the invitation of the Maize Forum and the Maize Trust management, I approached a number of leading mycotoxin researchers from CSIR Biosciences, PROMEC Unit of the MRC, ARCGrain Crops and universities to develop a strategy, namely vision, mission and objectives for mycotoxin research. 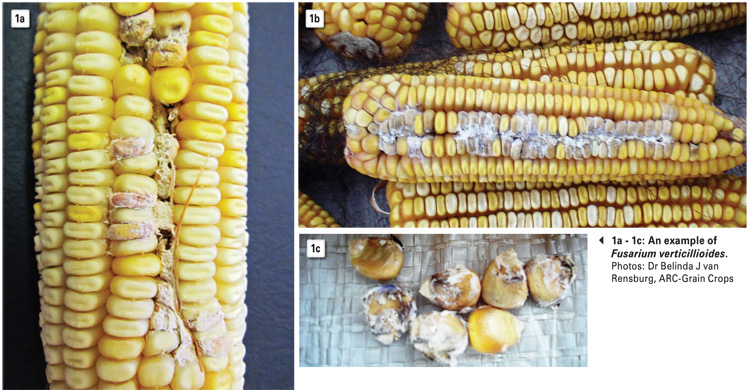 Main objectives for mycotoxin research at the Maize Forum/Maize Trust

The Maize Trust mycotoxin research benefits from the rapid multi-mycotoxin analytical technology available at the SAGL, Pretoria and at the Central Analytical Facilities of SU, both equipped with UPLC’s connected to Quattro mass spectroscopy systems.

The characterisation and quantitation of the mycotoxins involved in diplodiosis, however, still remain a challenge. In this regard, researchers at the University of Pretoria are equipped with hyphenated HPLC – Solid Phase Extraction – 500 MHz Bruker Nuclear Magnetic resonance cryoprobe, which allows differentiation between known and unknown compounds as well as establishing full constitutions directly from the crude extract with a minimum amount of material.

The Maize Trust strongly advocates interinstitutional and interdisciplinary research, as a prerequisite for excellent mycotoxin research. A management system for annually selecting and evaluating a number of research projects, based on peer review, has been established.

The members of the MRRP examine the reviewers’ reports and select a number of the project proposals to be enhanced and submitted to the Maize Trust as comprehensive research proposals (CRPs). The successful authors of the CRPs are invited to present their proposals at a meeting of the MRRP held in August.

The research outputs of the various research groups are actively monitored as a prerequisite for on-going investment in the projects. The participating scientists are encouraged to submit their research findings for publication in peer-reviewed journals, and industry directed publications, to transfer information to the farming community and to contribute to human capital development by training postgraduate students up to the doctoral level.

In South Africa, world-class mycotoxin research has been done over many years at the CSIR and the MRC.

Over the past few years, research was sponsored at the ARC/Grain Crops, ARC/OVI, CPUT (former PROMEC Unit of the MRC), SAGL, SU, UCT, UP, TUT and UKZN.

The research outputs contribute to the national and international standing of mycotoxin research in South Africa, with the credo: Local relevance at the standard of international excellence.