Often when interacting with producers, it becomes very apparent that root and crown rot are rarely seen as a problem experienced by producers. The most common statement being in the general lines of having successfully practiced maize monoculture for 15 years and never struggled with root rot a single day…

They would all agree that there were one or two seasons when the yield achieved wasn’t satisfactory, but are quick to point a finger to the lack of (or untimely) rain experienced during the seasons in question. Upon closer enquiry, however, it becomes very clear that no effort was made to dig up some plants and observe the degree of root rot experienced during the season.

The question now arises as to how certain are you that the lower yields can be attributed to climate and not root rot? A study conducted by the ARC-Grain Crops Institute (ARC-GCI) demonstrated a 1,8 t/ha yield decline for every 25% increase in maize root rot.

Even with limited root rot, you accordingly already suffered some losses. While not much can be done with regard to the climate, root rot on the other hand can be managed.

Root and crown rot are seen as a disease complex as numerous fungi are involved, whilst every plant will have some degree of root and/or crown rot during the season. This fungal complex observed in a specific field will in addition not only differ from the next, but will also differ between seasons.

Graph 1 provides a profile of fungi isolated from maize roots sampled at an ARC-GCI trial at Buffelsvallei (Ventersdorp). The various bars depict the frequencies of twelve selected fungi as measured over a period of five years. For this specific field, Fusarium oxysporum, F. verticillioides and Trichoderma spp. were the most prominent over all seasons.

During the 2012/2013 season (indicated in yellow) Stenocarpella maydis (causal organism of Diplodia stalk rot) as well as Macrophomina phaseolina (causal organism of charcoal rot) occurred in higher frequencies than was observed in any of the other seasons. The degree of root rot observed and the resultant yield loss experienced during this season correlated with these two fungi and the conclusion was accordingly made that losses suffered could be attributed to the impact their infection of the roots, crowns and stalks had on the plants’ capability to fill their cobs.

This technology enables researchers to accurately identify and quantify these fungal pathogens without having to plate out and perform microscopic identification and sequencing. During the past season this method was tested on some of the root samples sent in by producers.

In order to obtain the best possible explanation for visual defects observed in the field, samples brought for analysis must both consist of plants that are seen as ‘healthy’ (or control plants) as opposed to those that are seen as ‘diseased’.

Photo 1 presents such a sample where the ‘healthy’ plant had clearly a much larger root system than the ‘diseased’ plant. In the field, the ‘diseased’ plant appeared stunted. What should, however, be noted is that both root systems had root rot to varying degrees. The results obtained from qPCR analysis showed that mainly three fungal pathogens were detected: Fusarium equiseti, Exerohilium pedicellatum as well as Rhizoctonia solani (Table 1 and Photo 2). 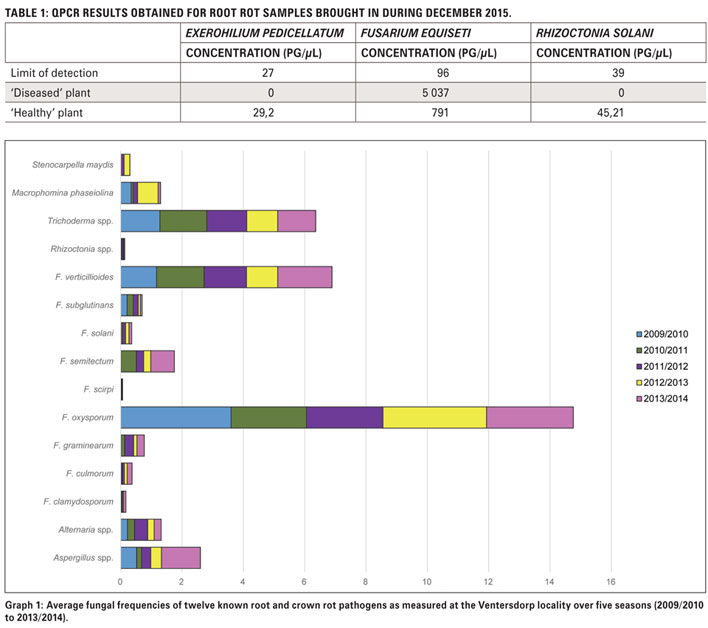 Again it should be noted that both root systems had varying degrees of certain fungi, but the ‘diseased’ plant had much higher frequencies of F. equiseti compared to the control plant. Now, at least, we have an idea of which pathogen(s) are present within the production system, which might be responsible for yield losses suffered.

Based on the fungi identified, recommendations can be made for the way forward. With the current case, the results were somewhat confusing as E. equiseti is known to result in root rot in younger plants, whilst other international literature view the fungus more as a saprophyte (i.e. an organism that survives on dead organic material).

The recommendation was accordingly made that crop rotation should be considered (since the plants came from a maize monoculture system), but also that the plants and soils be tested for the presence of nematodes. What is often observed is that the damage caused by nematodes will result in greater degrees of infection by fungi in the surrounding soil.

The observed root rot and the subsequent fungi isolated is accordingly rather secondary than the primary cause for the visual damage observed. It is therefore possible that other factors can predispose plants to infection by fungal pathogens. Nematodes can play an important role in soilborne diseases of crops and should not be overlooked in disease enquiries. Another such factor is herbicide damage. Soybean samples were sent in with symptoms that resembled that of Pythium root rot (Photo 3).

International literature, however, warns that symptoms of Pythium root rot on soybean and herbicide damage are nearly identical and care must be taken with the identification of the disease. Plating out the root samples allowed the growth of many fungi, but no Pythium spp. were identified. No amplification of Pythium spp. could in addition be obtained through qPCR analysis and Pythium had to be eliminated as the possible culprit.

Due to the wide range of other fungi isolated, primary pathogens could not be identified. This created the impression that the rot observed was a result of random infection by whatever fungi were present in the soil. The conclusion was drawn that although root rot was present and could have resulted in the losses observed, the fact that such a wide range of fungi were isolated could also point to infection that occurred after the plant was exposed to a certain stress. Since the symptoms resembled that of herbicide damage, the recommendation was made that the producer investigate such a possibility.

A new project co-funded by the Maize Trust commenced at the ARC-GCI during April of this year and focuses on the further development of the qPCR technology. The succession of the fungal pathogen complex will be monitored – a first of its kind. This will evaluate how qPCR technology can improve the understanding of soilborne diseases and contribute to better management strategies for producers.