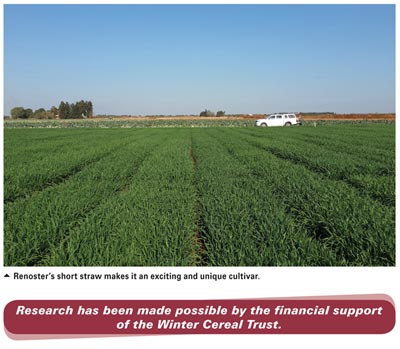 Renoster is an exciting new wheat cultivar that will be available as part of the irrigation wheat package of the ARC-Small Grain Institute (ARC-SGI), to replace the short growing cultivar, Steenbras. The cultivar is in the process of being commercialised and the ARC-SGI is pleased to announce that Renoster seed will be commercially available in 2017. The ARC SGI has high hopes for the cultivar and is confident that it will be one of the leading cultivars in the irrigation area.

Renoster is an exciting and unique cultivar due to its short straw. With a straw approximately 20 cm to 25 cm shorter than Duzi, Renoster will be an excellent choice for resistance to lodging, especially at a high yield potential.

During the 2013 season, Renoster produced yields of up to 10,3 ton/ha with an average of 8,7 ton/ha over different environments in the cooler irrigation areas. In most cases, Krokodil was the only cultivar that produced higher yields than Renoster and in general Renoster outperformed Duzi. In the warmer irrigation areas, Renoster produced an average yield of 8,7 ton/ha over different environments. When hectolitre mass was considered, Renoster had an average of 77 kg/hl.

A second characteristic that makes Renoster a good choice is its short growth season. It is harvest ready more or less ten days earlier than other cultivars on offer. It is rare that a cultivar with a short growth season can compete with yields of medium growth period cultivars.

All wheat cultivars of the ARC-SGI in the area have excellent baking quality and Renoster is no different. It has proved to be a cultivar to contend with and with the correct management, will realise exceptionally good yields. Its short straw and short growing period also provides producers with a cultivar that can be harvested earlier with less plant residue that will enable the producer to prepare the field for the next crop in their crop sequence.