The 2016/2017 soybean crop quality survey is the sixth annual survey performed by the Southern African Grain Laboratory (SAGL). The goal of this survey is to compile a detailed database, by accumulating quality data collected from the national commercial soybean crop over several seasons.

Quality analyses, which included grading, were performed on 150 composite samples. These composite samples, representing each delivery of soybeans at the various silos throughout the soybean production regions, were taken according to the prescribed grading regulations, during the 2017 harvesting season. 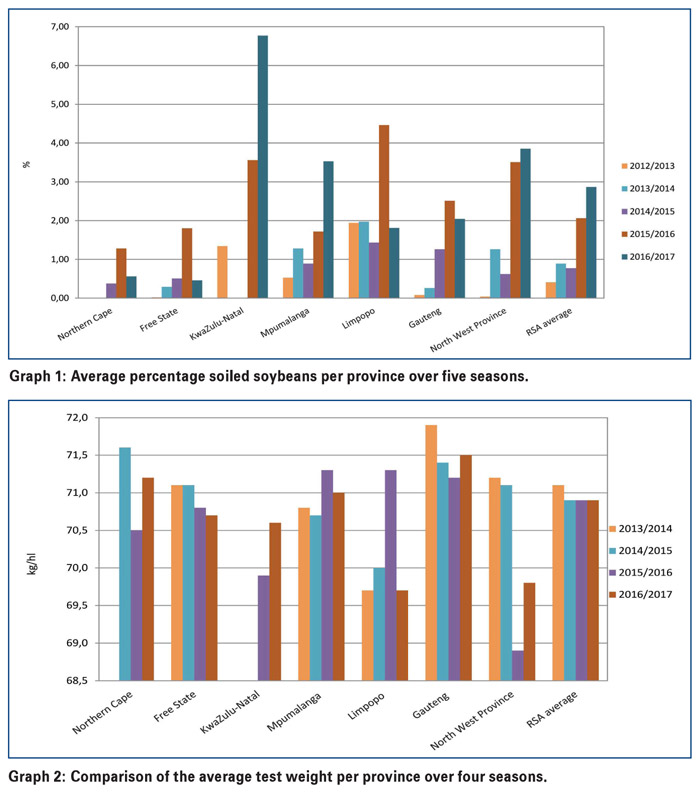 Other deviations resulting in the downgrading of samples were the percentage other grain, the percentage sunflower seed present, the percentage foreign matter, as well as the presence of poisonous seeds. None of the samples graded contained any wet pods.

The national weighted average percentage soybeans and parts of soybeans above the 1,8 mm slotted sieve which pass through the 4,75 mm round hole sieve, decreased from 0,92% the previous season to 0,88% this season. This is the lowest percentage of the six seasons for which crop quality data is available. The national weighted average percentage defective soybeans on the 4,75 mm sieve increased slightly from 2,02% last season to 2,22% this season.

The percentage of samples containing sclerotia from the fungus Sclerotinia sclerotiorum, almost tripled from the previous season (from 25% to 70%). The three highest percentages of sclerotia observed (0,38%, 0,36% and 0,30%) were on samples from Mpumalanga.

These percentages are, however, still well below the maximum permissible level of 4%. The national weighted average percentage this season was 0,07% compared to the 0,04% of the previous season.

Although test weight does not form part of the grading regulations for soybeans in South Africa, the g/litre filling weight of each soybean sample was determined by means of the Kern 222 apparatus. The test weight values were then extrapolated by means of formulae obtained from the test weight conversion chart for soybean of the Canadian Grain Commission. See Graph 2 for a comparison of the test weight per province over the past four seasons. These approximated values provide a measure of the bulk density of South African soybeans.

For a summary of the nutritional content analyses, namely crude protein, - fat, - fibre and ash obtained over a period of five seasons, see Table 1. These results are routinely reported on a dry/moisture-free basis (db), for comparison purposes however the national ‘as is’ basis results are provided as well. These ‘as is’ values were calculated using the weighted national average moisture values.

Visit our website (www.sagl.co.za) for detailed results of this, as well as previous surveys. The reports are also available for download in a PDF format.