PUT UP YOUR HANDS to help

I recently saw some disturbing figures. The chief economist of Standard Bank calculated the cost of the Zuma Error (not era) at more than R1 trillion. This could have created more than a million job opportunities, which could easily have cared for 4,5 million people. The amount would have earned the state about R300 billion in tax revenue, and South Africa would not have been humiliated with junk status.

However, I was extremely surprised at how the beneficiaries of all the corruption are still shamelessly fighting for their positions at the troughs. Nobody is confessing. No, the whistle-blowers are being suspended and fired instead. When is this going to stop? The new men and women are probably first trying to patch or divert the biggest pipes, and the smaller leaks will not receive any attention for quite some time.

With our director general at the Department of Agriculture, Forestry and Fisheries butting heads with the minister again, I am reminded of a remark by Kallie Schoeman (one of our executive members) to the EFF when they threatened him with land occupation on his farm: ‘You cannot scare me, I was born in Africa.’ That is probably why we keep on surviving all the chaos.

While the one government department is basically collapsing, another puts up its hand to assist. The Department of Science and Technology is one such department that is more than ready to assist agriculture. They regularly appear on our front stoep to find out where they can help and provide significant funds to get agricultural research going again.

Another group that is offering assistance is the universities that quickly fill the gaps everywhere to support the agricultural sector with research. This is really encouraging. One group just never has money for anything, while another is eager to invest in agriculture. You cannot but wonder what makes the difference. My best guess is mere leadership. Visionary leaders with a strong character and high ethical values make a significant difference on any platform.

After months of struggling and negotiating, SAGIS has at last published the industry’s first maize export forecast. At least everyone in the market now has an equal chance to know what the exports will look like. There is a glimmer of light in the global tunnel when I hear how greener fuel (ethanol) is appearing increasingly in global policy documents. Signs that the demand for grain will continue to rise are encouraging – if only the prices will keep pace as well. Elsewhere in the world scientists are gathering to talk about gene editing to increase the yields of crops and fight diseases.

We will have to work hard to make sure that the new technology is available to our producers as soon as it hits the market. Exclusion from this can seriously impair us, as we will not be able to participate in the growth of global markets. The turbulence in international politics (particularly in the USA) can be a boon to our grain exports if the cockerels on the big dunghills take each other on. If the sun shines, we must make hay. With this in mind, our teams are working industriously to develop new markets that until recently have been buying large tonnages from the USA. 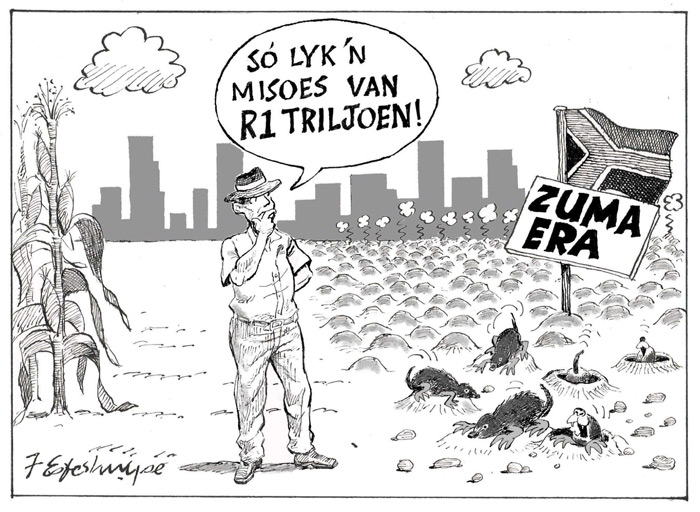